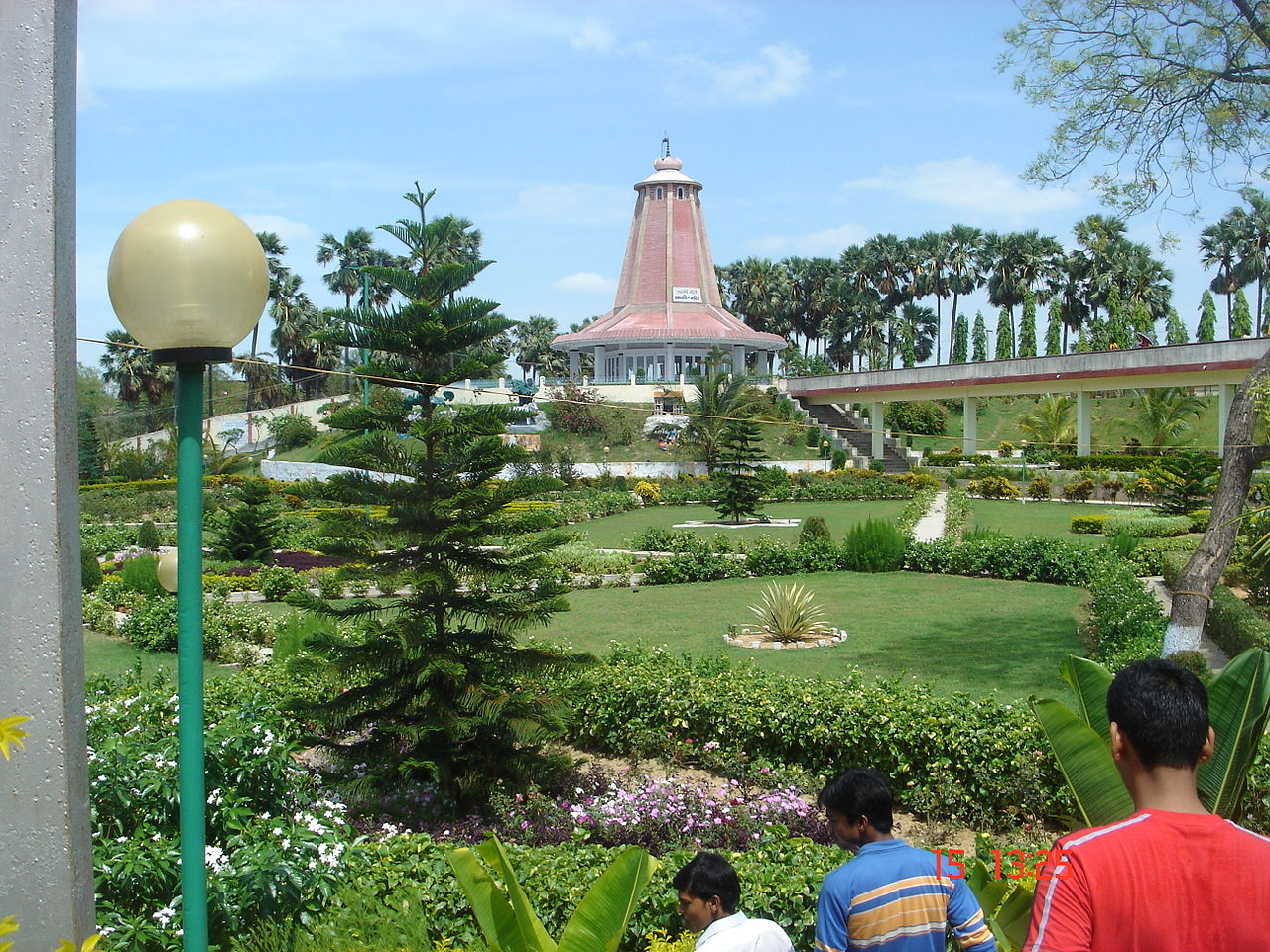 Commonly known as the “Silk City,” Bhagalpur is the third-largest city of Bihar. It is one of the most industrially and commercially important cities of Bihar. Apart from being the home to the world-famous “Bhagalpuri Silk” Sarees, this town is one of India’s major educational centers. Several people from all over the country stay in Bhagalpur to earn off a living. That is why Bhagalpur city is so populated and diverse. Even though the city is located 250 km from Patna, it is well connected and easy to reach from there. Most tourists visit there through trains as Bhagalpur has one of the busiest railway stations in India. For people wanting to travel by Air, the nearest airport is Patna and from there they can rent a car or a taxi.

As Bhagalpur town is located right by the sacred river of the Ganges, you will view the river from different parts of the city. Moreover, it is the only city in India where you can be lucky enough to get a glimpse of Gangetic Dolphins. Bhagalpur is genuinely a city filled with mythological mysteries and religious significance. Did you know the first female doctor in South Asia was from this town? Her name was Kadambini, and she genuinely is the pride of Bhagalpur.

Bhagalpur city is quite significant to the Buddhist as well as Hindu communities. This city is one of the oldest continually resided towns globally, and you will be able to see ruins of ancient architectural structures while exploring the city. If you are planning on visiting Bhagalpur, you will find this blog quite helpful. Here, we will provide you with the best places to see in Bhagalpur. By reading this article, we hope you will be able to plan the itinerary of your trip peacefully.

When you reach Bhagalpur, make sure you get to see some of the places mentioned below:

Even though Kuppaghat was only a cave in earlier days, it has been turned into a beautiful ashram surrounded by orchids and a beautifully sculpted garden. In fact, the name Kuppaghat is derived from the word “Kuppa,” which roughly translates to a hole or a cave. This place is one of the best places to see in Bhagalpur because Maha Rishi Mehi practiced Yoga for several months. The original cave was so old that it is quite surprising to see the location’s current state. When you reach there, you will feel a certain sense of calmness. Throughout the walls of the Ashram, you will get to see sculptures and paintings.

The busiest time for the Ashram is during Guru Purnima. Devotees from all around the world gather there to pay tribute to their Gurus. One of the most intriguing things about the Ashram is that you could explore the hidden passages over there by an attendant’s help.

On your trip to Bhagalpur, you must not forget to visit the Vikramshila University as it is one of India’s most historic places. The university is located 38 km from Bhagalpur and was one of medieval India’s most significant areas. Between the 9th and 13th centuries AD, this institution flourished to its fullest. The Pala Dynasty ruler was the founder of this university, and during his reign, more than a thousand students and hundred teachers studied over there. Most students used to study tantrism in the institution. But other subjects like theology, grammar, philosophy, etc., were also taught over there.

Even though many university parts are now destroyed, you can still witness the main double-storied stupa, library, and the votive structures over there. Both Hieun Tsang and Fa Hein visited this Buddhist university as they mentioned it in their books in detail. Apart from the ruins of Vikramshila University, you can also visit the monastery, Hindu, and Tibetan temple to the north of the institution while exploring there. You will understand the grandeur of the Pala dynasty by looking at the exotic terracotta plaques on the walls of the structure. If you want to experience the university’s importance to its fullest, it will be better if you visit Bhagalpur in February. As the Vikramshila Mahotsav takes place during that month, you will be able to participate in the university’s festival. 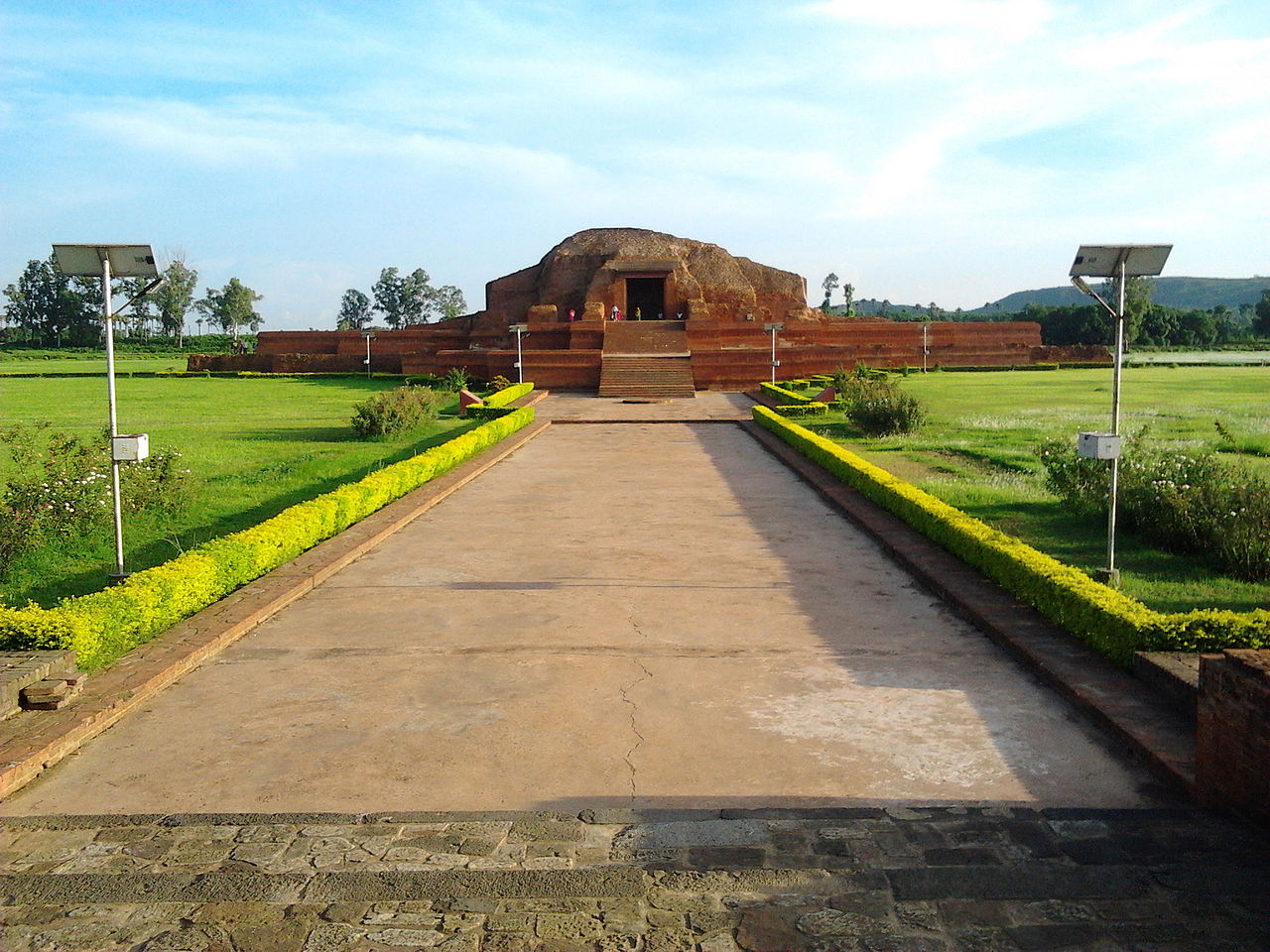 Entry Fee: INR 5 for the citizens of India and SAARC and USD 2 for US citizens.

Mandar Hills is one of the most important and sacred places in Bihar for the Hindu community, located in the Southern part of Bhagalpur. This site is unique as it has a great significance to the Hindu mythology. According to popular beliefs, the Gods used the serpent as a rope to churn the oceans so that they could receive Amrit or nectar. Local people over there believe there are multiple footprints of Lord Vishnu throughout the location. You will witness many rock-cut sculptures that offer you a clear description of the said incident when you go there.

Apart from the Hindus, the Mandar mountain is also essential for the people of the Jain community. As in this site, the 12th Jain Tirthankar attained Nirvana, and many Jain people visit there. Mandar Hills is located 45 km from Bhagalpur. You will have to rent a car to visit there from Bhagalpur. A hill station named Mandar is also located only 5 km from the site. If you go there, do not forget to go to the hill station as well. You will find scenic beauty to be quite gorgeous. 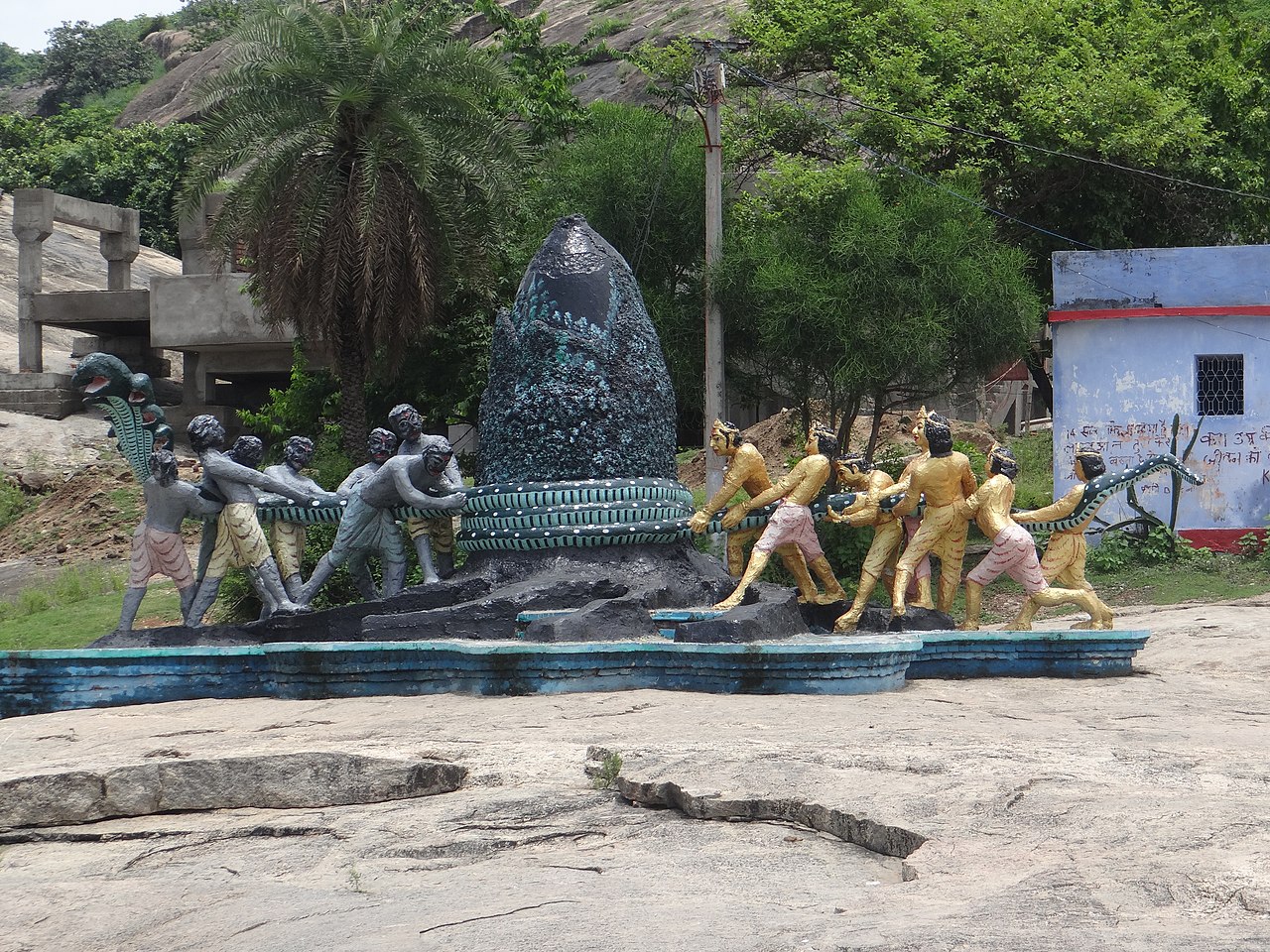 Nathnagar is one of the most important places for the Jain community in India. The reason this site is so famous is that it is home to the sacred Vasupujiya Jinalaya temple. In the temple, you will see a multitude of shrines of Mahavira Jina as well as Shantinath. Moreover, Nathnagar is the birthplace to the 12th Jain Tirthankar Vasupujiya. The temple is architecturally beautiful. When you go there, the first thing you will notice is the decorative dome at its entrance. Inside the temple, you will witness the mesmerizing illustration of Jambu Dweep on the ceilings. Jambu Dweep is the mythical and sacred world preached by the Jain people. As the entire image is made with glass pieces, you will understand the amount of perseverance that went into creating this masterpiece.

The temple also has a beautiful glass painting of Harivansh Purana Texts depicted on the passage walls. When you pass the temple’s doorways, you will be impressed as they are decorated with colorful tiles. The temple is commonly known as Digambar Jain Siddha Kshetra, as it is the birthplace of the 12th Jain Tirthankar. 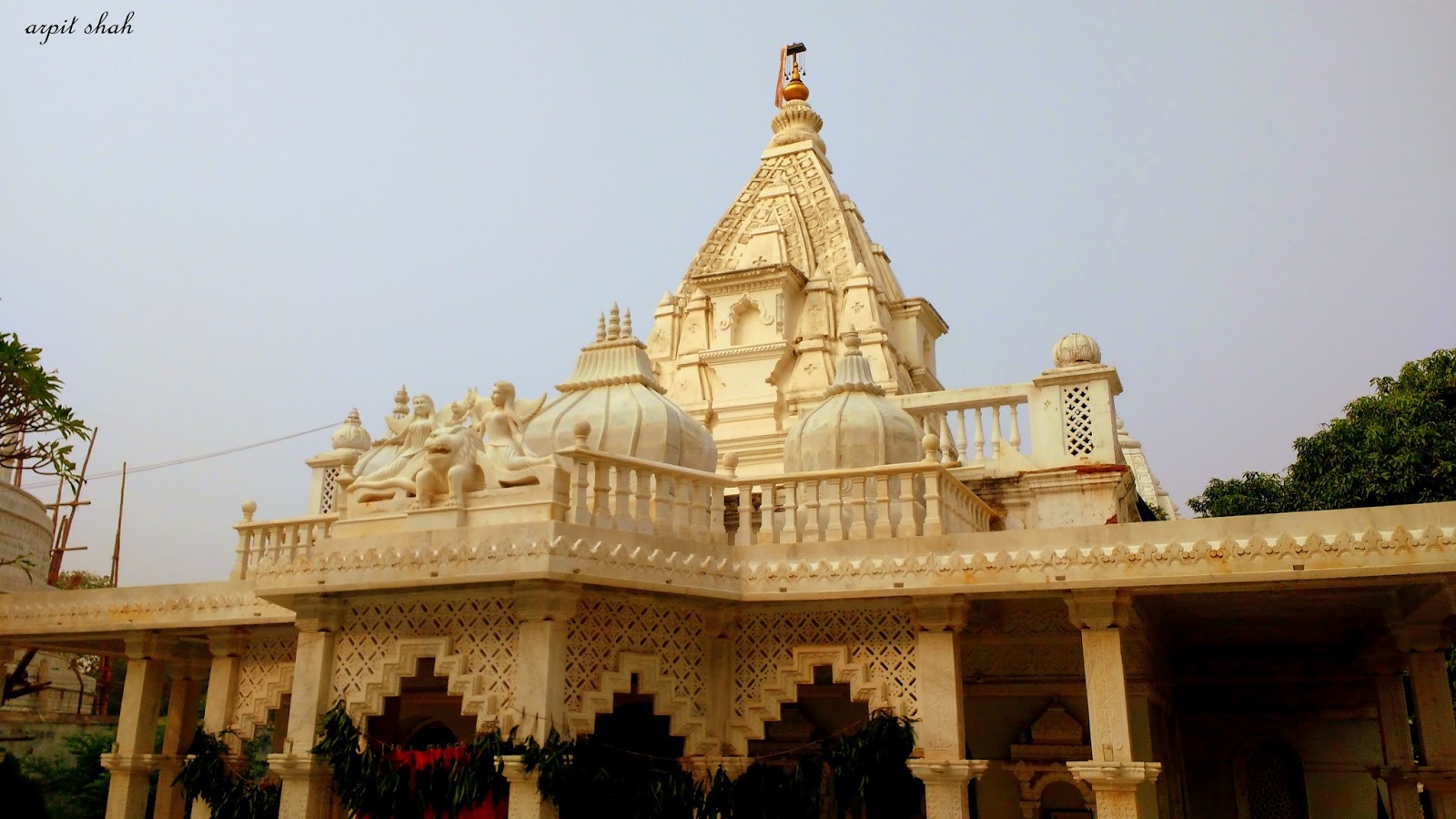 Constructed during the Gupta’s reign, the Colganj Rock Cut temple is one of the best examples of exemplary architectures of ancient India.

Even though the temple is mostly destroyed, you will still be able to see its ruins. The temple was initially built between the 5th or 6th century and is one of the best places to visit in Bhagalpur, Bihar. Throughout the temple walls, you will be able to notice rock-cut carvings of Buddhist, Hindu, and Jain idols. These ruins are found in the Kahalgaon and Sultanganj area of Bhagalpur.

According to popular belief, Colganj Rock Cut temple existed during emperor Akbar’s time, but it has not been proven. Many archaeology enthusiasts and researchers from all over the world visit the temple to study the carvings. 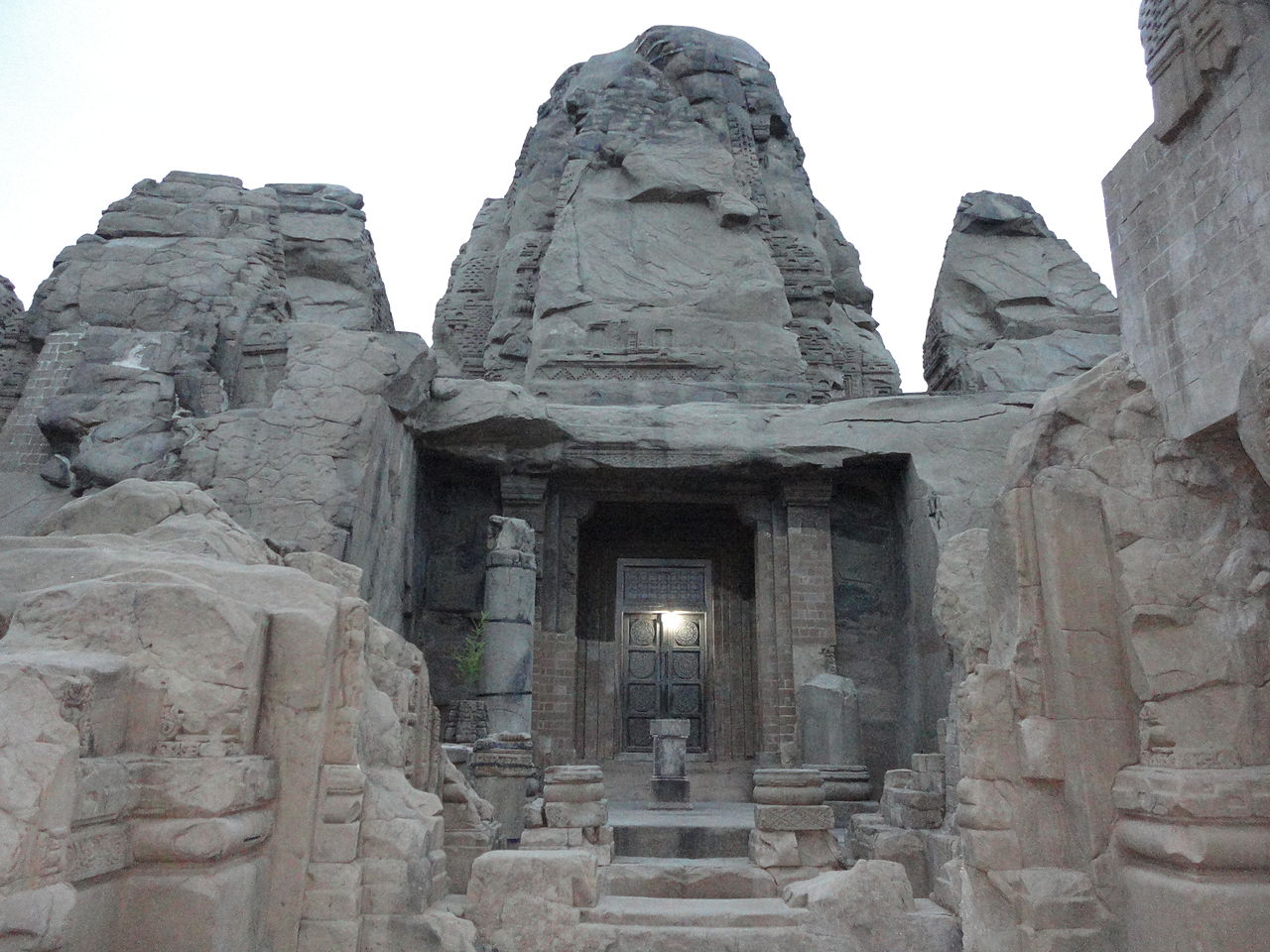 Dedicated to Lord Shiva, Ajgaivinath is a beautiful temple located 39 km from Bhagalpur. Harinath Bharati founded the temple in the 16th century. As the temple is one of the most important places for the Hindu people, several tourists and pilgrims from all over India go there during the Shravan festival. People usually visit there during the said time to collect the sacred water of the river Ganga. After collecting the water, they typically start their journey towards Deoghar to offer the water. According to common belief, the river Ganga is seized over there due to a curse of Janhu Muni. People also believe that by the penance performed by King Bhagirath, river Ganga was released from there.

Even if you are not a spiritual or religious person, you will find the temple incredibly gorgeous. The temple’s architecture is quite grand, and you will be able to see it from far away. Moreover, as the temple is situated on a rock over the river Ganga, you will see that the scenic view surrounding it is mesmerizing. 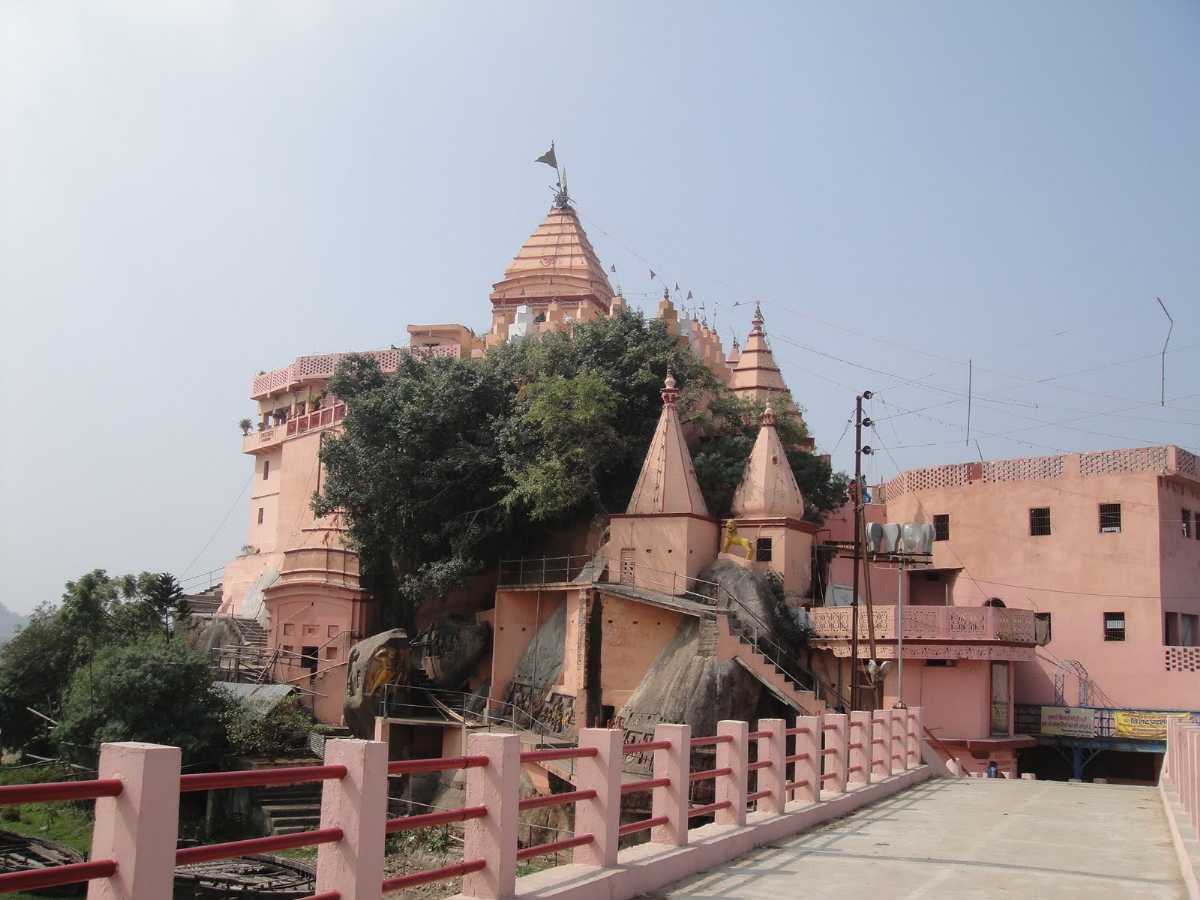 Located in the Champanagar area near Bhagalpur, Vasupujiya Swami Jain Temple is another sacred place for the Jain community. The temple is relatively modern and is beautifully decorated with ceramics and tiles. As the temple is located right at the center of Champanagar, you will have no problem finding it. This temple is dedicated to the Swetambara Jainism sect. Inside the temple, you will be able to see the shrine of Shantinath. 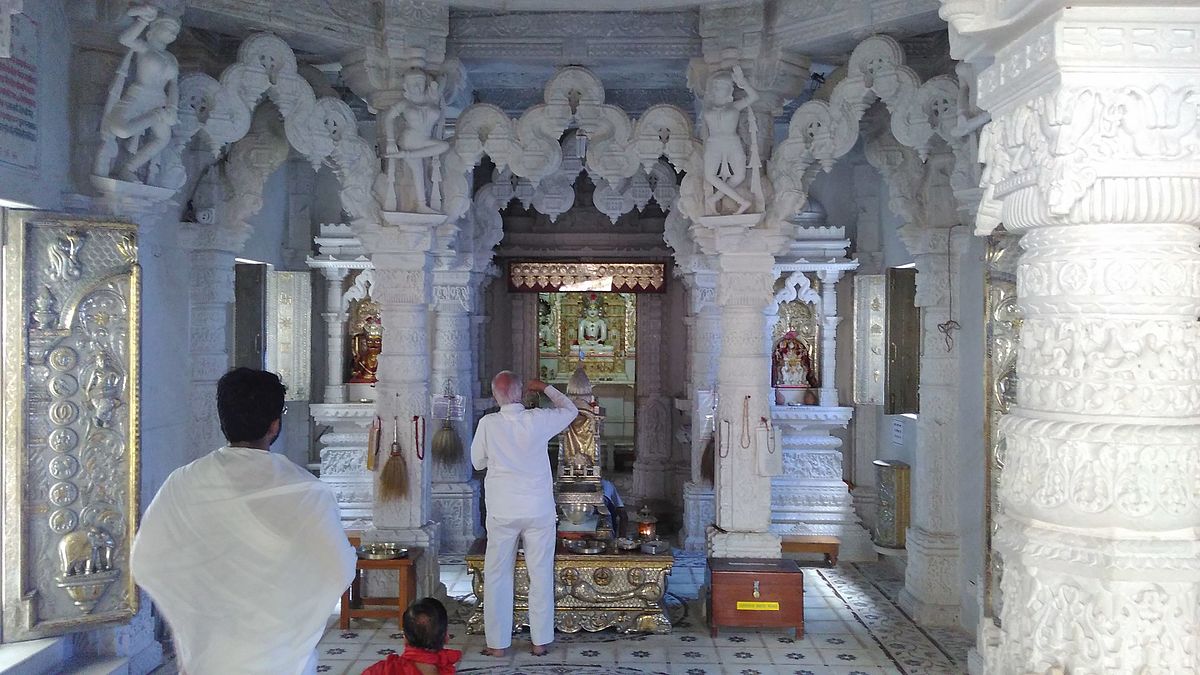 Mostly famous for the Shravani Mela held during July and August, Sultanganj is one of the best places to visit in Bhagalpur. The town is located only 28 km from Bhagalpur, and people usually start their trekking from there to reach Deoghar. One of the most important places to visit in Sultanganj is the temple of Baba Ajgaibinath. During the Sharavana Mela, people collect the water from the sacred Ganges river and offer that water to the Baidyanath temple in Deogarh. The most amazing part about the trek is that pilgrims cover this entire journey in bare feet.

Another exciting aspect of this town is that a stupa containing a large bronze statue of Lord Buddha was found over there. That statue was so archaeologically significant that it is preserved in England in the Birmingham city museum. 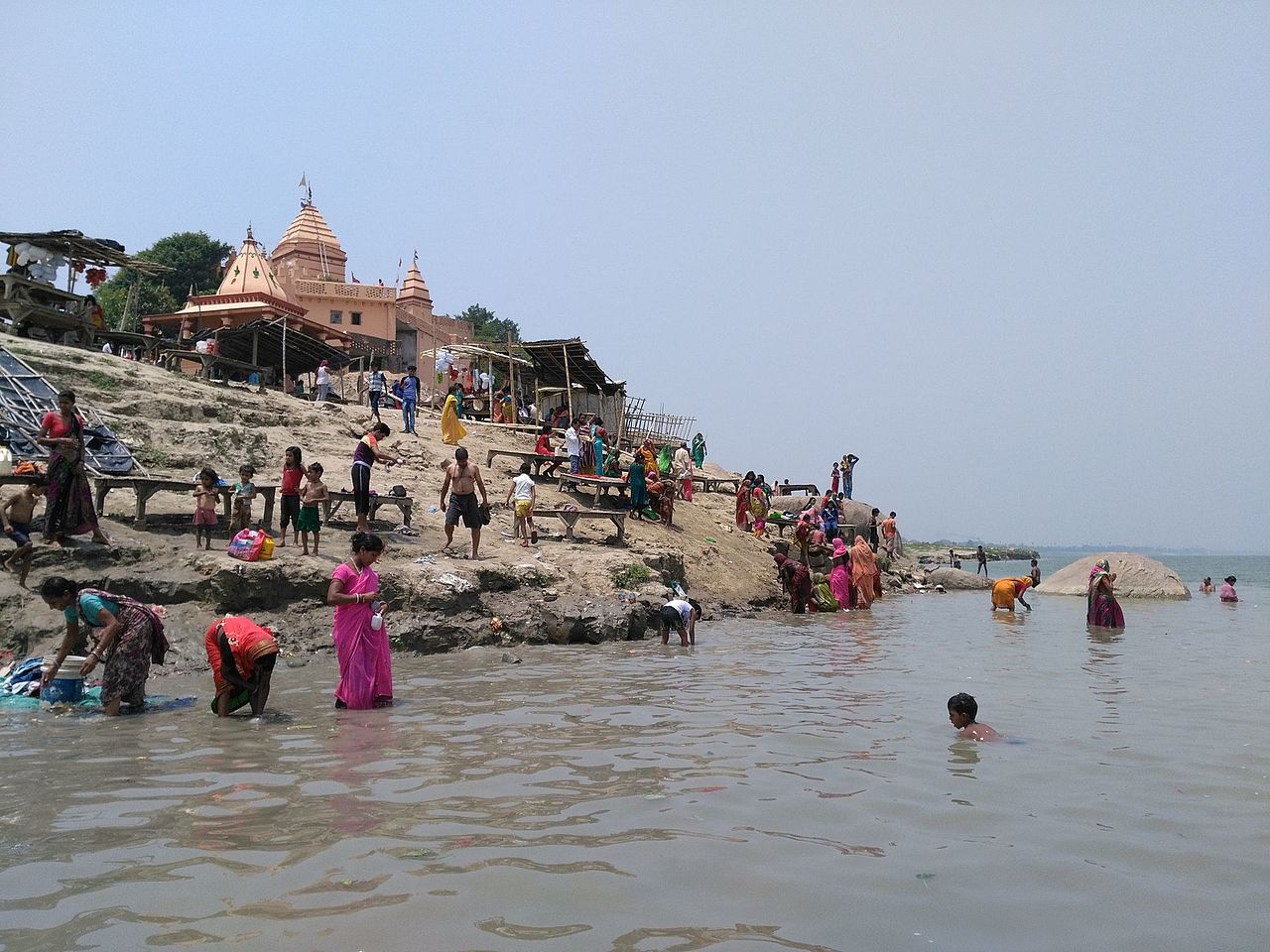 The Gangetic Dolphin Sanctuary is located along the river Ganges bank from the Sultanganj to the Kahalgaon area of Bhagalpur. A few decades back, Bhagalpur was lucky enough to be the home of several dolphins. But soon, the number of Gangetic dolphins started to diminish, and now only a few hundreds of them have survived. That is why the sanctuary was constructed in the year 1991 to protect them from any outside harm. These dolphins have been declared as the national aquatic animal of India in 2009. They are also protected by the Indian wildlife protection act of 1972.

If you visit the sanctuary, you might also see other wild and aquatic animals like Gharial, otter, turtles, etc. 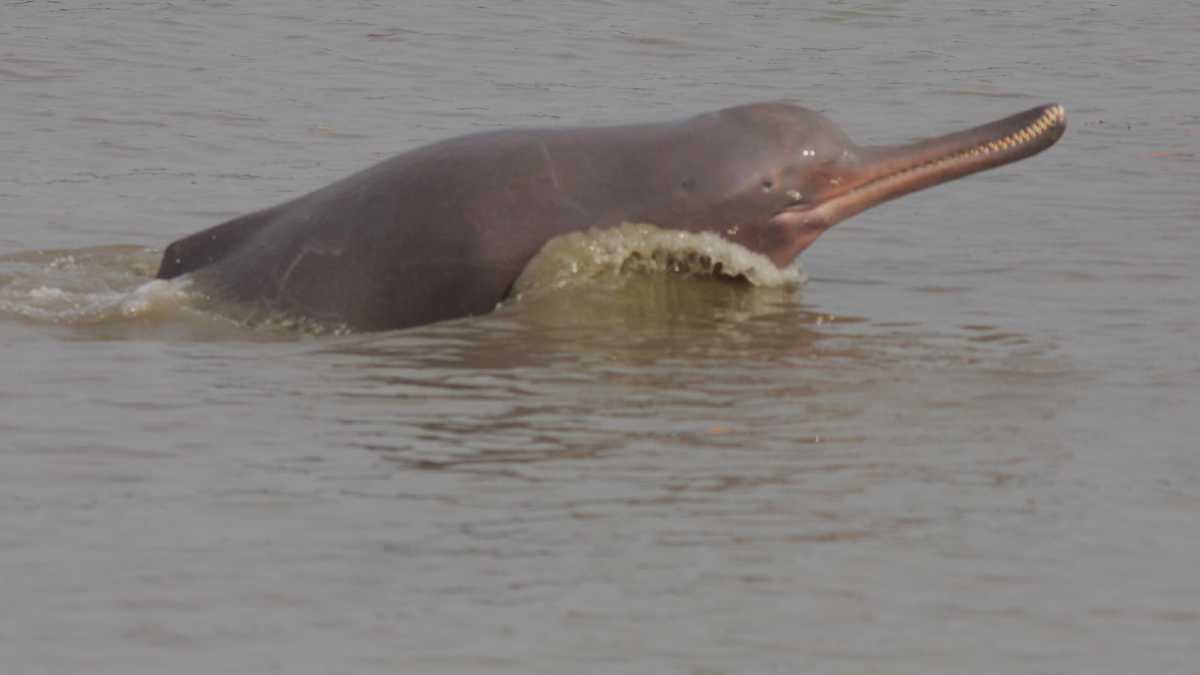 Even though Bhagalpur is most sacred to the Hindu, Buddhist, and Jain community, it is also essential to the people of the Muslim community. Khanqah e Shahbazia mosque is one of India’s most sacred mosques, and it is located right by the Bhagalpur railway station. The mosque is famous because it has the shrine of Sufi Shahbaz Rahmatullah. Originally the mosque was built by Aurangazeb. Many people believe that the pond’s water adjacent to the mosque is sacred and has medicinal qualities.

Many devotees from Bangladesh visit the temple to seek blessings. Even if you are not a Muslim, you should see the site as archaeologically it is pretty significant to India.

Bhagalpur is an integral part of Bihar and is a great tourist place for people interested in ancient history and religion. The best part about this town is that it is an amalgamation of different religions in India. By visiting Bhagalpur, you will learn a lot about India’s various cultures and religions. The places we have mentioned in the blog are essential, and you must visit at least some of them to finish your trip. 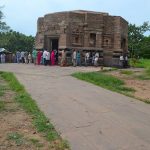 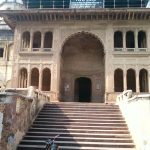 Visit Qila Mubarak, Nabha: History, How to Reach, Nearby Attractions. (2022) Next 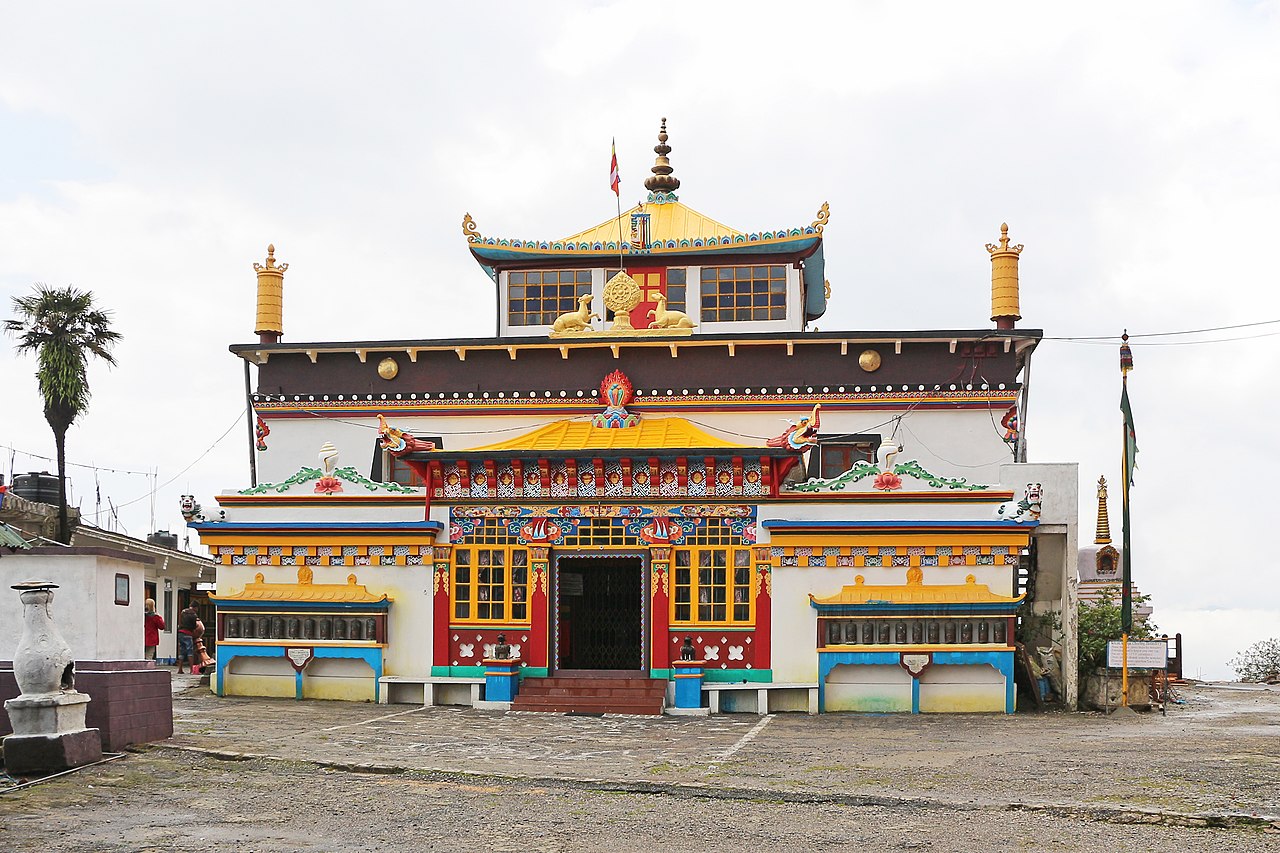