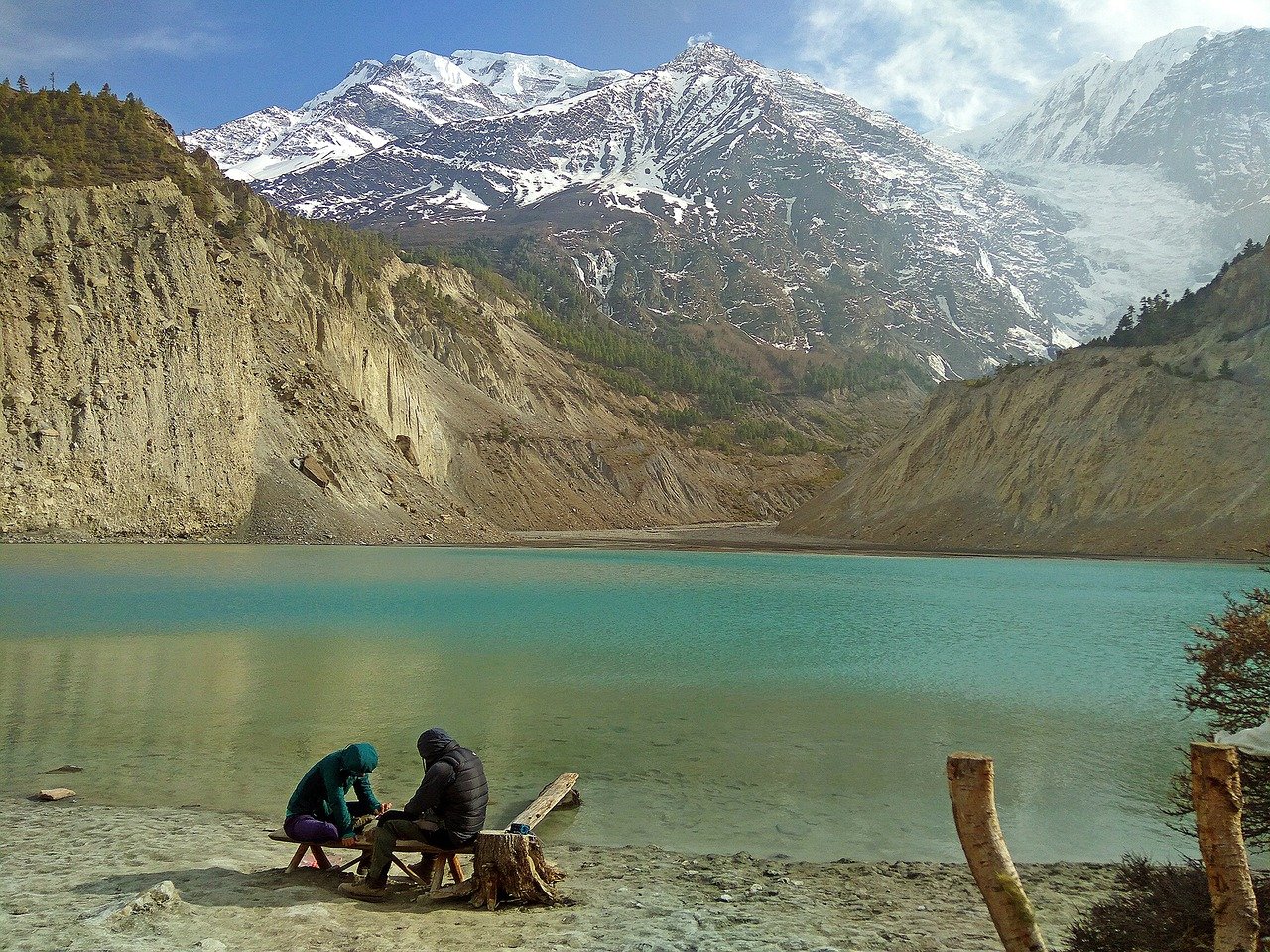 Located at the height of 11,545 feet, Manang is an unlikely candidate for becoming one of Nepal’s most-visited villages. But in reality, it is one of the sites along the Annapurna circuit trek, where people love to spend some time. Many tourists love staying for a few days amid the majestic beauty of Manang. As this tiny hamlet is located by the Marshyangdi river, the babbling of the flowing river can be heard throughout this enchanting town. This river flows towards the easter part of the Annapurna mountain. This tiny settlement belongs to Nepal’s Gandaki province and is home to a mere population consisting of 6500 people.

Unlike other Himalayan regions, the beauty of Manang does not lie in the lush greenery of the dense pine forests. Instead, its grandeur lies in its barren land and dry terrains. Even though the Marshyangdi river passes through the valley, its region is not fertile. When you see Manang for the first, you will be taken aback by its usual spectacle. The houses of this town match its barren aesthetics. Usually constructed of stones, the houses and cottages in Manang are quite different from those found in other towns in Nepal. As this is one of the biggest villages along the Annapurna circuit trek, trekkers go there to rest for a few days.

From Manang, you will get to see some of the largest peaks in the world. You will get to witness the Annapurna III and Gangapurna peak from any corner of its area.

The warmth of the locals of Manang also makes this site worthwhile. Buddhism is quite prevalent in this region of Nepal. That is why you will notice that most of the houses in Manang are decorated with Buddhist prayer flags. If you are participating in the Annapurna circuit trail or are planning on exploring Nepal’s obscure regions, you are at the correct place. In this guide, you will get a lot of important information regarding Manang that will help you plan a great trip to the beautiful village.

Manang is an exceptionally intriguing village where you would genuinely lose yourself. To genuinely be a part of it, you will have to partake in the following activities after going there.

One of the most important things to do in Manang while staying there is visiting its cultural museum. This museum is a great place to learn about the local life of the village. You will get a lot of information regarding the life of the people living there. The residents of Manang lead a pretty difficult life. Living at such a high altitude takes a toll on these people’s health. In this museum, you will know how they acclimate themselves during the harsher weather in the village. Before visiting the museum, you should know that it is closed between January and February.

Watching a movie while exploring a tiny part of Nepal might sound like a dumb idea, but in Manang, it is a novelty. At the height of more than 8500 feet, having a cinema hall in a tiny village is a big deal. That is why we would suggest you watch a movie while staying in Manang for a few days to help the site boost the economy. The town is quite proud of its theatre. In the hall, you will get to see movies like Everest and Into the Wild. Both of these massive Hollywood blockbusters were shot in Manang.

There are many cafes and bakeries located in Manang that sell lip-smacking baked goods. Most of these delicacies are prepared with fresh apples. You can also get a cup of freshly brewed coffee while staying in Manang. Gorging on a piece of delectable pastry along with a piping hot cup of coffee and enjoying the breathtakingly beautiful surroundings of Manang is one of the best things to do while staying there.

There are several sites that one can explore while visiting Manang. We have included some of the most popular ones in the following part of this guide.

Praken Gompa is one of the most spectacular sites located in Nepal. This Buddhist Stupa is located at an altitude of 11466 feet and can be reached by foot. The ascend to this Gompa might be exhilarating, but the views offered by it will make everything worth the trouble. From this Gompa, you will get to enjoy the panoramic views of the majestic mountain peaks, including Annapurna II, Tarke Kang, and Gangapurna. The view of these snow-peaked mountains from such a high altitude will offer you an otherworldly feeling. You will require almost an entire day to visit and return from Praken Gompa. Apart from Praken Gompa, you can also explore the Kagud, Bocho, and Karki Gompa, located pretty close to it.

Located at approximately 15,500 feet, the ice lake is one of the most famous sites near Manang. The trail to this lake is certainly challenging. Adventure seekers and mountaineers worldwide partake in this trek to witness the spectacular view of the lake and its surroundings. The trail to this trek is quite steep. Moreover, the intense cold at increasing altitude makes the trip quite difficult for many tourists. If you are a nature lover, you will love the entire hike. Throughout the trek, you will get to see the majestic beauty of Nepal. Apart from the mountain peaks, the entire region itself is enchanting. When you reach the lake, you will be stunned. The view of the lake amid the backdrop of snow-capped mountain peaks is mesmerizingly beautiful. 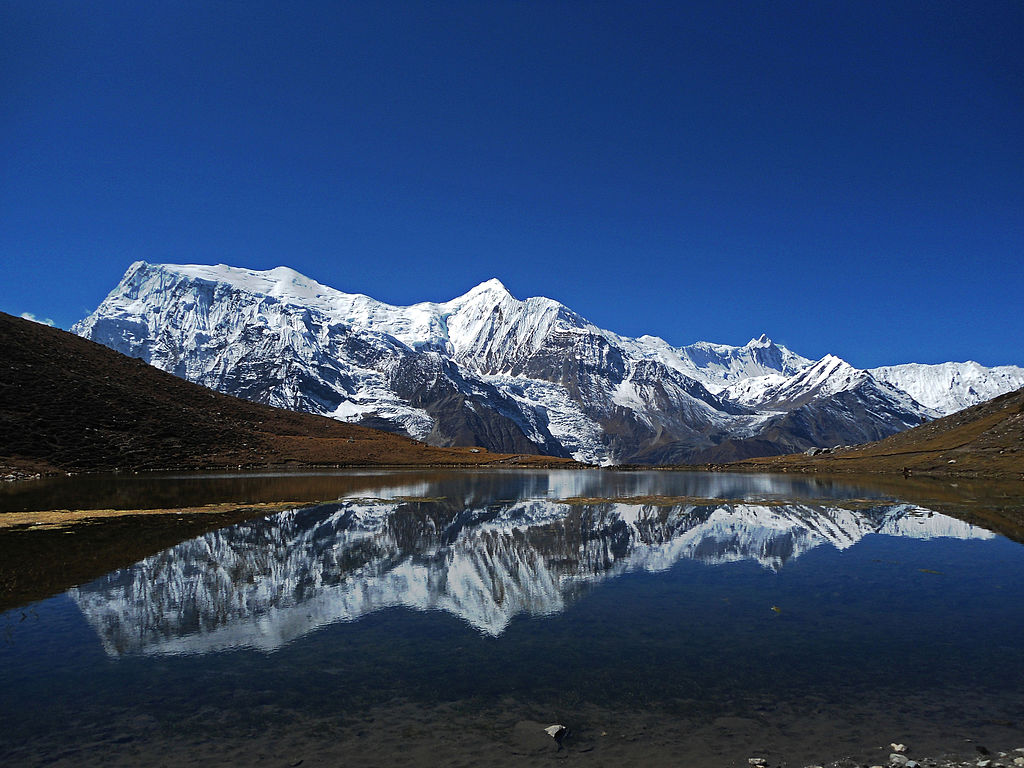 The Milarapa’s Cave is one of the most interesting places to visit near Manang. This site is quite important to the Nepali as well as Tibetan people. This cave is named after the famous Tibetan poet, Milarapa, who meditated in this cave. After reaching the site, you will see the statue of Milarapa. Even though the trek to this cave would take you around six hours in total, you will genuinely enjoy the beautiful surrounding views. From the site of Milarapa’s Cave, you will get to see the surrounding glaciers. This site is situated at an altitude of 14170 feet approximately.

Gangapurna Lake is located quite close to Manang. You will have no problem reaching this site. Within an hour you will be able to walk to this lake. The beautiful site is quite notable due to its turquoise blue color. This color of the lake’s water is not due to the sunlight but because of its sediments created by the Gangapurna Glacier. After reaching this site, do not forget to click many pictures as the entire setting is immensely picturesque. 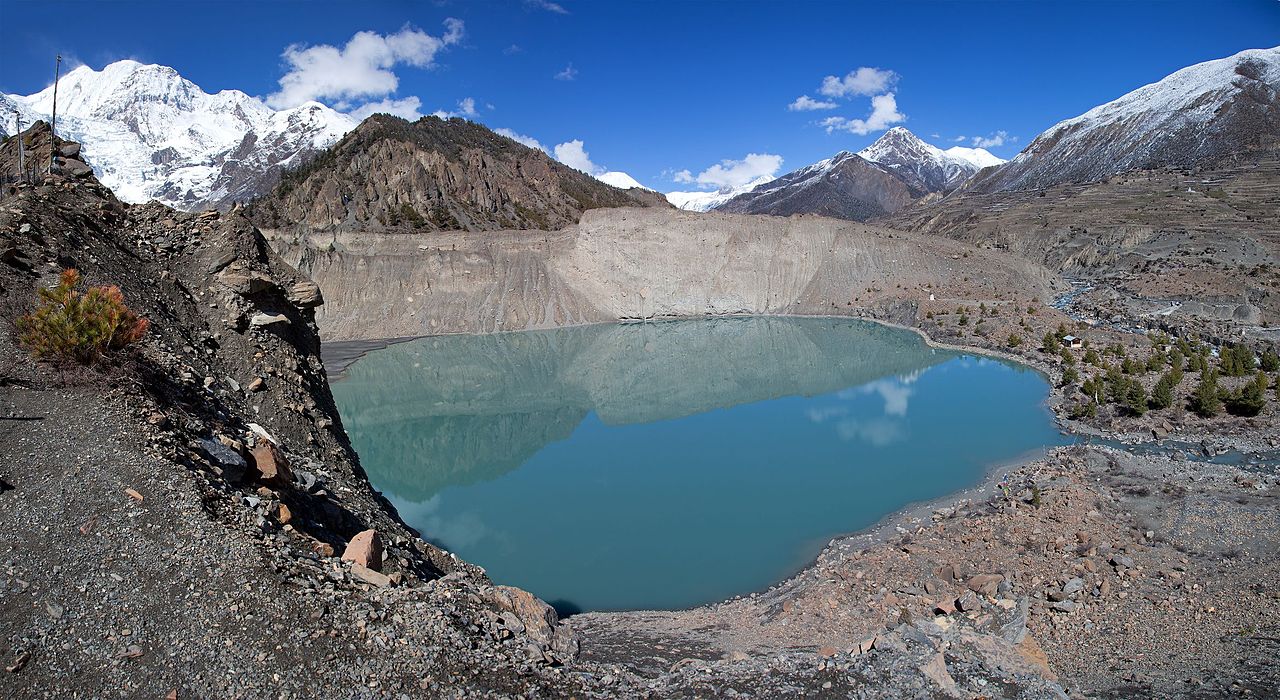 Manang is one of the most beautiful sites in Nepal that can only be reached by hiking. We are providing a brief about the trekking expedition to Manang in the following part of the blog.

To reach Manang, first, you will have to get to Jagat. Jagat is a town in the Manang district of Nepal and can easily be reached by a jeep from Kathmandu. Usually, the trip from Kathmandu to Jagat would take you around eight hours. Many people prefer to take a jeep from Beshisahar, while others like to travel from Kathmandu. Beshisahar is another tiny town in Manang where you could rent jeeps to reach the trek’s starting point. After staying for a night in Jagat, you will start your trekking journey in the upcoming day.

During the next day, you will have to trek to Bagarchhap from Jagat. Along the way, you will get to witness several mesmerizing sites, including Chamje waterfall. The views of the majestic Himalayan peaks, including Annapurna II and Lamjung Himal, will also make you extremely happy. While trekking to Bagarchhap, you will come across different Nepal villages, including Karte, Dharapani, and others. Remember to get to know about their daily lives by talking to the locals of the said regions. After arriving at Bagarchhap, you will have to stay there overnight.

The second day of your trek will take you to Chame, a breathtakingly beautiful village. After starting your hike, you will notice that the terrain towards Chame is quite challenging. As Chame is the Manang district headquarter, do not forget to shop for any essential you require for your trip from there.

After spending a peaceful night in Chame, you will have to start your trekking expedition towards Pisang on the third day of your adventure. Finally, on the fourth day of your hiking trail, you will reach Manang from Pisang.

Usually, tourists end their trip from Manang. Jeeps are available from Manang that will take you back to Kathmandu. Although it is advisable to trek to Manang from Jagat, many people prefer to start their hike from Chame. Some jeeps take tourists to Chame but are warned, the roads to Chame are horrendous and extremely dangerous. Many adventure enthusiasts prefer to take motorbikes from Pisang to get to Manang. If you want to quicken your trip, you can opt for the said options.

The weather in Manang varies a lot throughout the year. That is why you must visit there at the correct time to enjoy it at its fullest glory. As reaching Manang involves a lot of hiking, you will require visiting there in the months with the least amount of rainfall and optimum climate.

If you visit there between October to November, you will get phenomenal weather with a clear skyline. In these months, you will get to see the majestic beauty of the Himalayas quite easily while visiting Manang. The temperature might drop by many degrees during the night, but in the day, the weather will be perfect for adventurous explorations.

You can also visit there in May. In this month, the longest period of sunlight is available in Manang. Even though the daytime might be uncomfortably warm in May, the nights will be pretty cold.

No matter, when you visit Manang, always steer clear of July and August. You will not be able to explore the region without any hindrance during these months of tremendous rainfall and landslides.

March and April are also great for visiting Manang, as the Tibetan New Year is celebrated. If you are always intrigued about unknown cultures and traditions, going there in the said months is perfect for you.

Best Places to Stay in Manang

Even though the number of hotels and homestays in Manang is not staggering, a few places are located over there that are perfect for spending a few days. Some of the top places are provided below.

Tilicho Hotel is one of the most popular hotels in Manang. From the outside, this property looks like a Gompa, but it is quite cozy from the inside. You will get to stay in comfortable rooms and get to have home-made and delicious meals by staying there. From Indian to American cuisine, the cook at Tilicho hotel is quite capable of preparing delicious dishes. 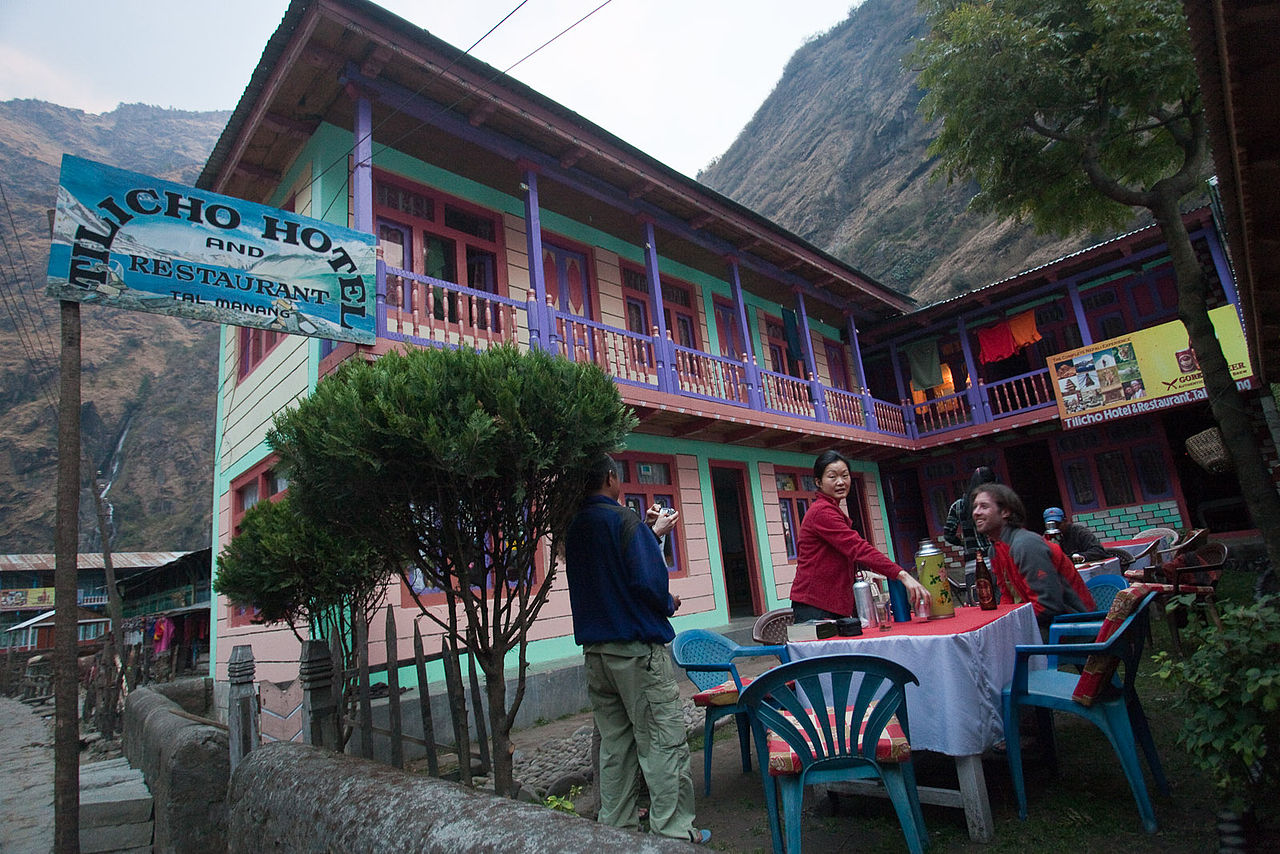 Price of a room per night: Call the hotel phone number.

Hotel Yeti is another property in Manang that is quite famous among tourists. Some tourists prefer staying there repeatedly on their multiple treks to the Annapurna Circuit. All the rooms in this property come with attached bathrooms. There is a bakery attached to this hotel. You will get to taste a variety of delicious goods while staying there. From pies to pastries, from coffee to jams, this hotel is quite famous among food-lover travelers. 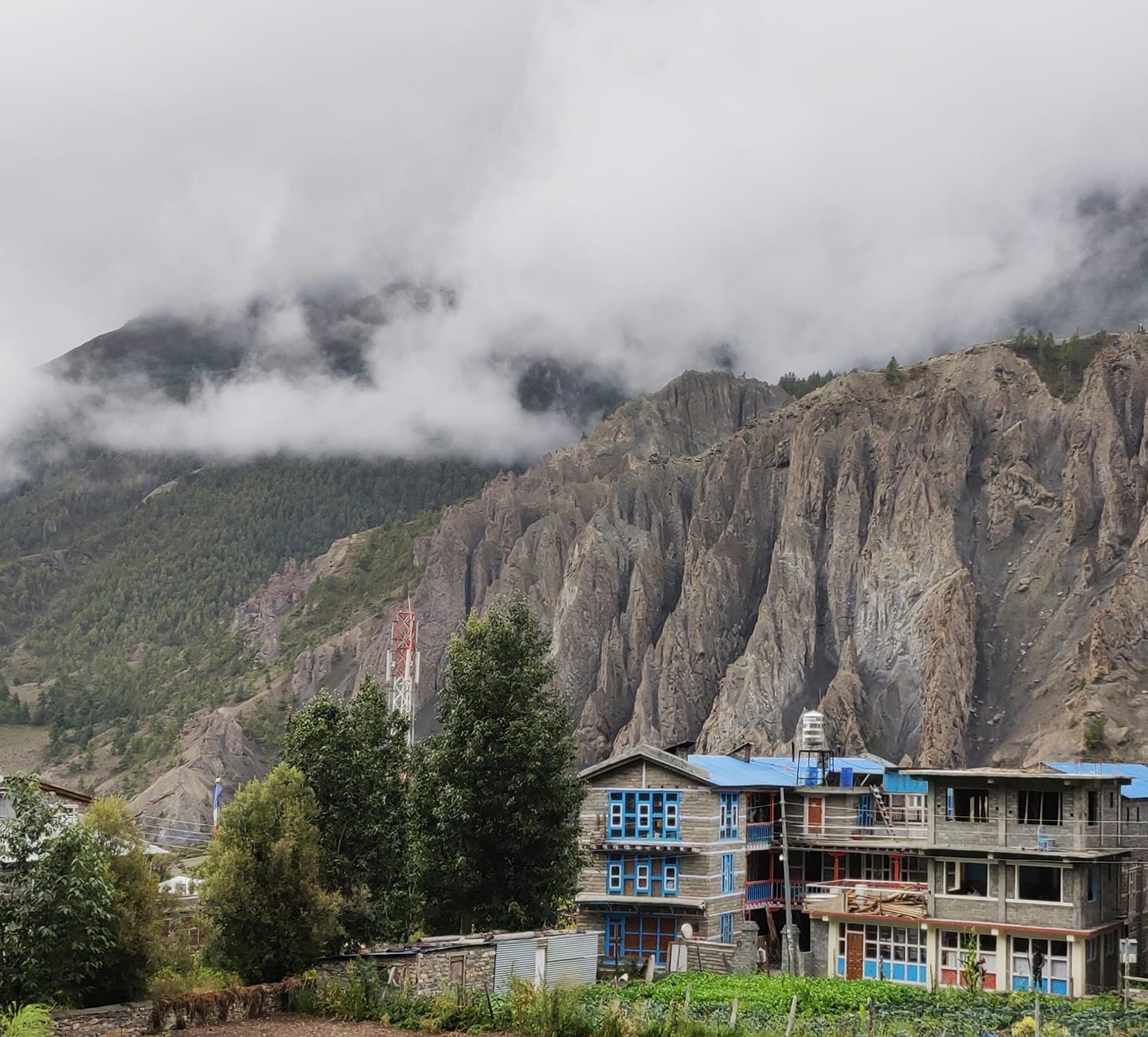 Price of a room per night: Call the hotel phone number.

Manang is a magical place in Nepal. Spending even a few days on this site offers you a new outlook on your life. Navigating your way through this obscure village might seem difficult, but reading this guide will help a lot in overcoming your doubts. We hope by studying this detailed travel guide helped you sort some of your queries regarding Manang easily.

We wish you good luck on this new adventure to Manang. 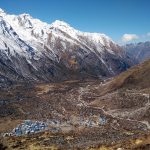 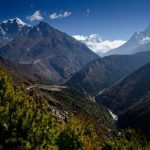