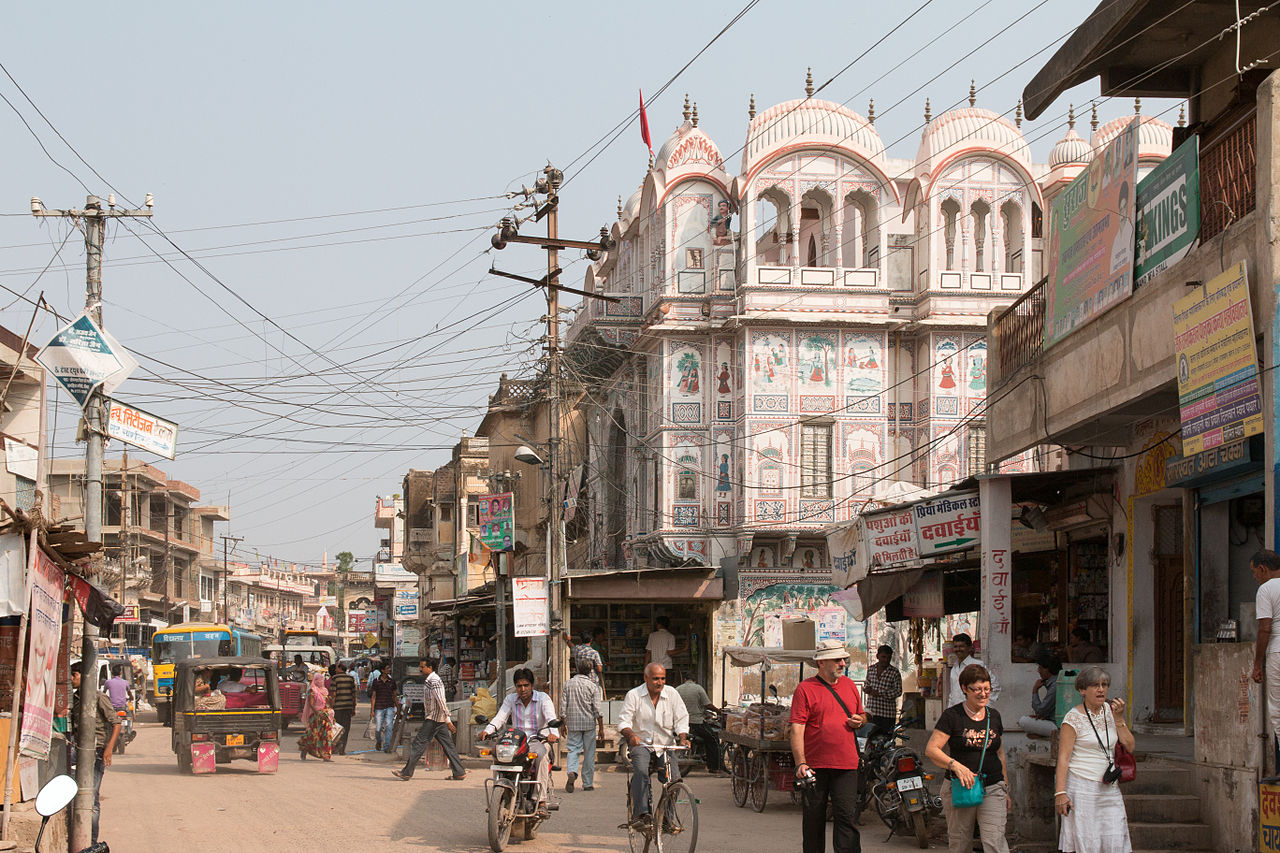 Visit Fatehpur in Rajasthan: 4 Popular Places to Visit in and Around Fatehpur, Rajasthan (2023)

Rajasthan is one beautiful state that the country boasts of. Well-known for its rich heritage, ethnic culture, vibrant festivities, delicious cuisine and royal past, the Indian state of Rajasthan is nothing short of a paradise for every traveller to explore. However, like any other place, Rajasthan also has some of its popular tourist attractions and some not so famous ones. Situated in the Sikar district of the Indian state of Rajasthan, Fatehpur is an ancient town. A prominent part of the Shekhawati region, Fatehpur is a perfect destination for all those people who are looking forward to exploring a new and offbeat place.

Though not much well-known but this ancient town of Fatehpur is quite popular among those people who have a special place for art and culture in their hearts. In this travel guide for Fatehpur, Rajasthan, we have gathered some important information about Fatehpur which you must know before visiting the place. Continue reading to know more!

Located in the Shekhawati region of the district of Sikar which was the old capital of the Indian state of Rajasthan, Fatehpur is today a popular offbeat tourist destination of the state. Established in the year 1451 by Nawab Fateh Khan, the city of Fatehpur got its name from its founder. 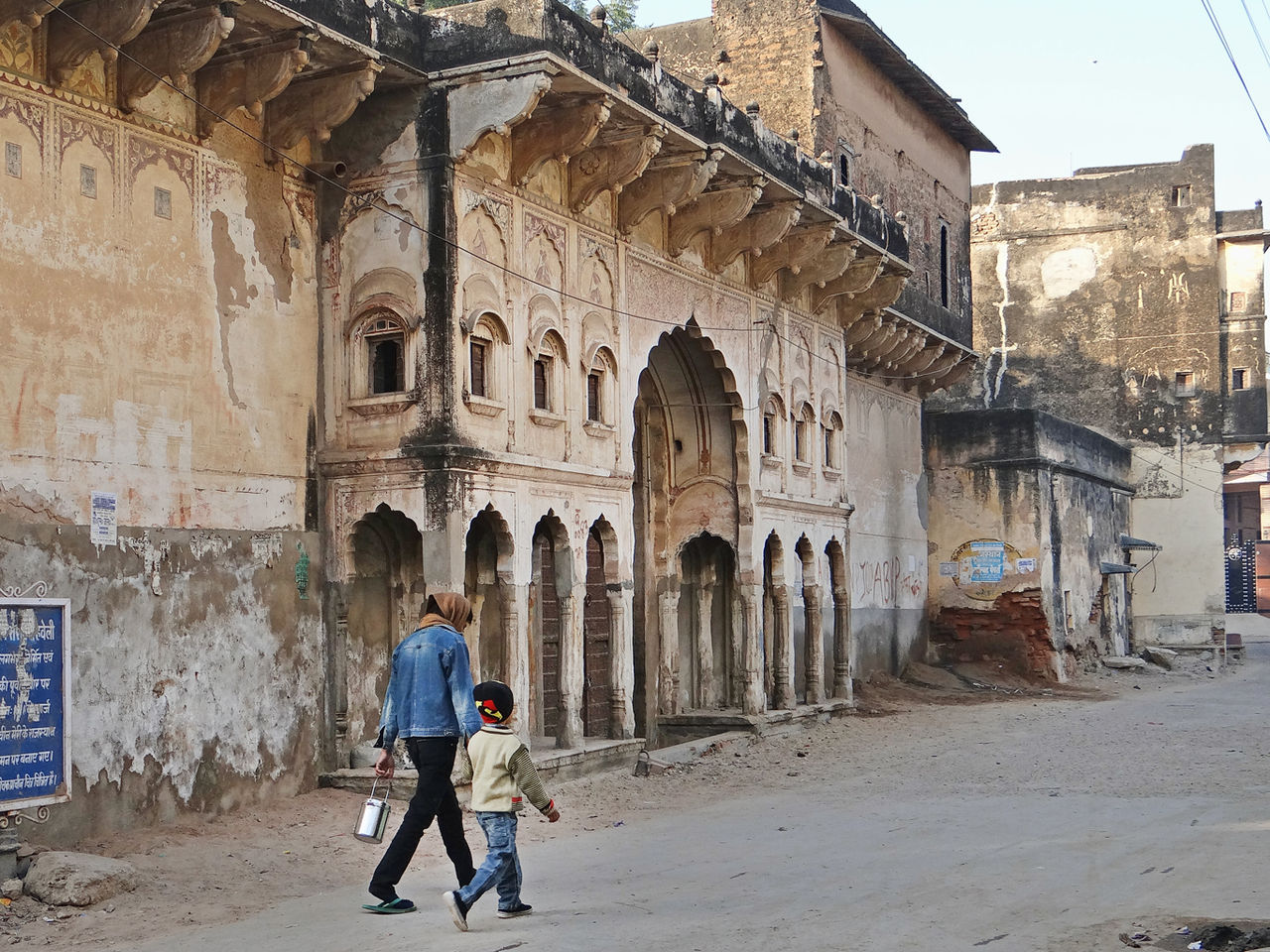 Image Source
After Nawab Fateh Khan, the city was ruled by his son Jalal Khan, who founded the village of Jalalsar. Other than that, this ancient town of Fatehpur has witnessed a rule by a plethora of other rulers such as the son of Maharaja Vijay Singh of Shekhawati, Rajkunwar Digvijay Singh and a series of his descendants. Fatehpur with a rich historical past is mainly popular today for housing several grand castles. It is owing to this fact only that this ancient town of Fatehpur has alone managed to capture the attention of tourists from all over the world.

If you are someone who doesn’t like overcrowded places and prefer simplicity, then Fatehpur is just the right vacation destination for you. Fatehpur is one ancient town where you can witness the magic of beauty along with simplicity at just the same time. Owing to the fact that the city is a house to several grand havelis and beautiful temples, Fatehpur is often referred as the cultural capital of Shekhawati region. A French artist purchased the Deora Haveli and transformed it into an amazing cultural centre in the year 1999 and since then it is a popular attraction of the Fatehpur town. The Dua Janti Balaji Dham Temple, dedicated to Lord Hanuman is also a major highlight of the city as it attracts huge crowds of devotees from all over the country. There are many religious beliefs surrounding the temple. There are many other mesmerising havelis located in the city of Fatehpur which are immensely popular among travellers because of their old, authentic and mysterious charm. Adorning several stunning fresco paintings and murals, the haveli walls truly reflect the rich and vibrant culture of the place.

4 Popular Places to Visit in and Around Fatehpur, Rajasthan

Fatehpur is one amazing tourist place to visit in Rajasthan state, especially for all the offbeat travellers. Talking particularly about the sightseeing attractions located in Fatehpur, then you don’t have to worry much as there are a plethora of interesting and exciting spots nestled in the town.

Ranging from a number of majestic palaces to grand forts, there is a lot for one to explore in Fatehpur. Adorning the mesmerising craft of fresco, the palaces and forts here are truly a treat to explore, especially if you want to break out of the vicious cycle of your monotonous routine. Some of the must-visit places in and around Fatehpur are:

This is one of the grand havelis for which the ancient town of Fatehpur is immensely popular. A property of the Deora family until the year 1999, when they sold it off to Nadine le Prince, who was a French Artist. The entire haveli was then modified and renovated by the artist to convert it into an amazing cultural centre. Showcasing different impressive artwork of French as well as Indian modern artists, this cultural centre is one of the most popular tourist places to visit in Fatehpur, Rajasthan, especially if you are an art lover. Adorning stunning fresco craft predominantly in the hues of blue, Nadine Cultural Centre also boasts of holding plenty of art exhibitions which further display brilliant masterpieces of contemporary as well as modern art. 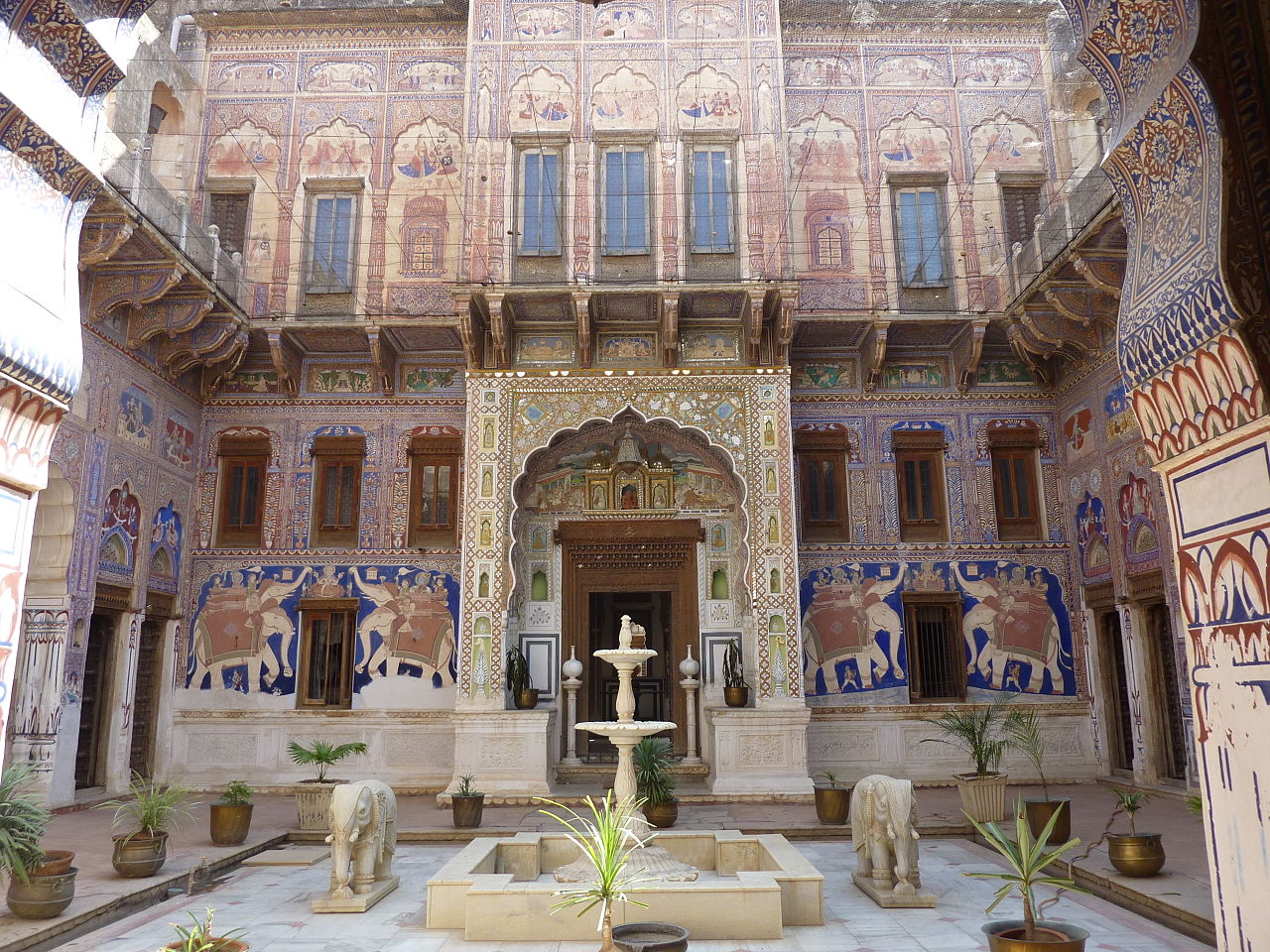 If you are looking for something religious or spiritual in the ancient town, then Dwarkadheesh temple is one of the most popular attractions of Fatehpur. Tracing its origin in the pages of history back to about the 19th century, this temple is quite popular among people and attracts devotees from all over the country. Since the temple was constructed by the sons of Seth Ashram Ji Poddar in the memory of their loving father, this temple is also well – known by the name of Ashram temple. You can find a plethora of stunning murals housed inside the temple which wonderfully represent the famous Shekhwati wall paintings and also known by the name of ‘Open Air Art Gallery’.

The posh and luxurious lifestyle of the royal nawabs of Rajasthan is pretty much evident from the magnificent havelis. The Jagannath Singhania Haveli is one such popular haveli located in the Fatehpur town. Popular for housing several artistic paintings and mesmerising sculptures which were built during the British reign, this haveli is a prime tourist attraction of Fatehpur. Built in the year of 1860, the main attraction of the haveli is its series of marvellous paintings. Boasting of a height of 50 feet, the haveli has a special room which has nine doors. Some of the other rooms which you can visit inside the Jagannath haveli are the Baithak which is a five-door room, Rangeen karma which is a colorful room displaying many hand-made paintings of Radha Krishna and Buran which is an underground safety room that served as a safety valve for the royals in the past. You will be pleased to know that this fascinating mansion even boasts of housing a huge pool and a stunning garden with colorful and well – maintained plantations, reflecting the rich culture of Shekhawati.

Serving as the house of a plenty of royal families, the town of Fatehpur houses a plenty of magnificent havelis. Sitaram Kedia ki Haveli is one such amazing haveli that is believed to be constructed by Seth Shree Bohitram Kedia who was the grandfather of the late Sitaram Kedia. Rajendra Kumar Kedia who is an eminent author and his son, Anurag Kedia are the current owners of this stunning haveli in Fatehpur, Rajasthan. The haveli sports two huge courtyards with a beautiful garden and a fountain. One can find plenty of traditional wall paintings throughout the haveli. It is believed that this was the first haveli in Fatehpur to have electricity via generators which also gave it the name of Bjiliwali Haveli. Though now, most of the rooms of the haveli are locked but still the magnificence and exceptional charm of the haveli makes it a must-visit attraction in Fatehpur, Rajasthan. 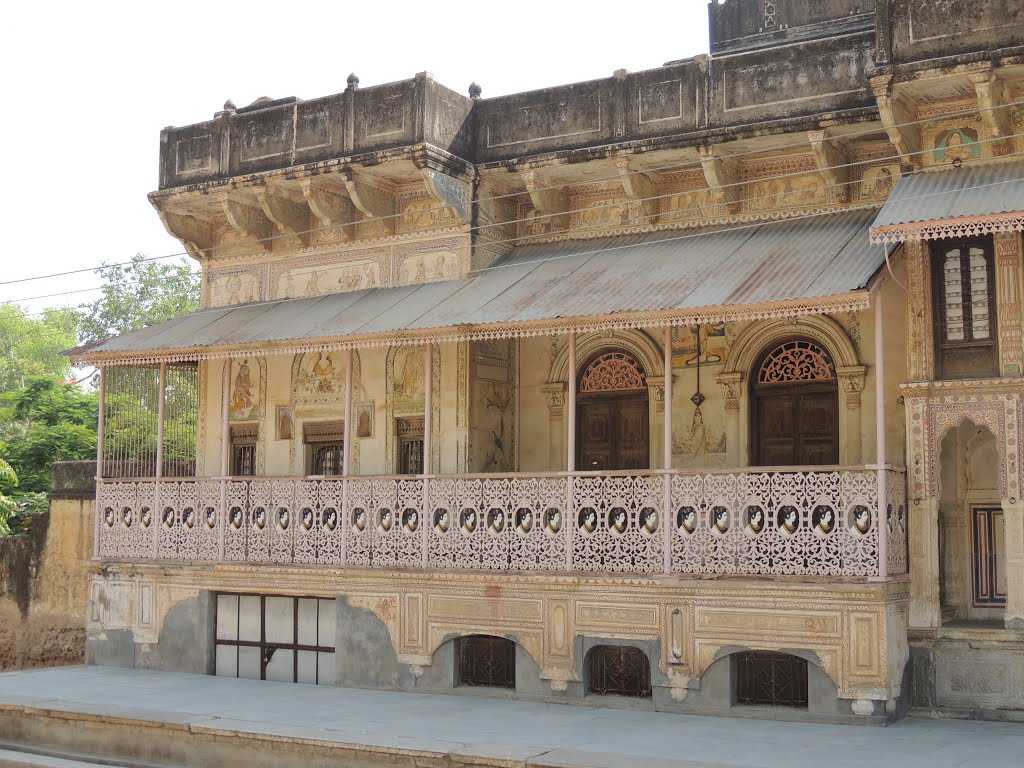 How to Reach Fatehpur, Rajasthan?

Located right on the Delhi – Jaipur highway, the Fatehpur town is easily reachable. So, you don’t have to worry about facing difficulty in reaching this ancient city. It is well – connected with almost all means of transports. You can reach it:

The ancient town of Fatehpur welcomes travellers from all over the country throughout the course of year. However, if you are looking forward only to the best experience, then the best time to visit Fatehpur for you will lie somewhere in either the autumn or spring season. Try avoiding visiting the Fatehpur town during the summer or winter season. While summers can be extremely harsh with the high temperatures, the winter season on the other hand are not liberal too as the temperature drops down to 2 to 3 degrees. Hence, the ideal time for you to visit Fatehpur would either be in the months of February to March or from October till November.

Offering a sneak peak in the Rajasthani culture, rich historical past, lovely hospitality and the love of art and culture, Fatehpur is a great tourist place to visit in Rajasthan for almost everyone. No matter whether you are looking forward to a relaxing vacation or wish to explore a plenty of offbeat sightseeing places, the ancient town of Fatehpur will keep you entertained and engaged with its plenty of attractions.

Ans. Fatehpur is an ancient town of Rajasthan which boasts of being a home to a plenty of grand havelis, historic monuments with great significance and brilliant architecture. There are several beautiful wells and springs in the region too. The rich culture of the Fatehpur is another attractive feature.

Q2. How Is The Food Facility In Fatehpur, Rajasthan?

Ans. There are many good restaurants in Fatehpur that serve a variety of delicious dishes of the Indian cuisine.

Q3. Who Should Visit Fatehpur, Rajasthan? 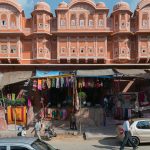 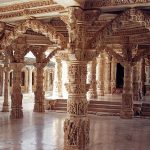 Mount Abu Travel Guide: The Only Hills Station of Rajasthan (2023) Next