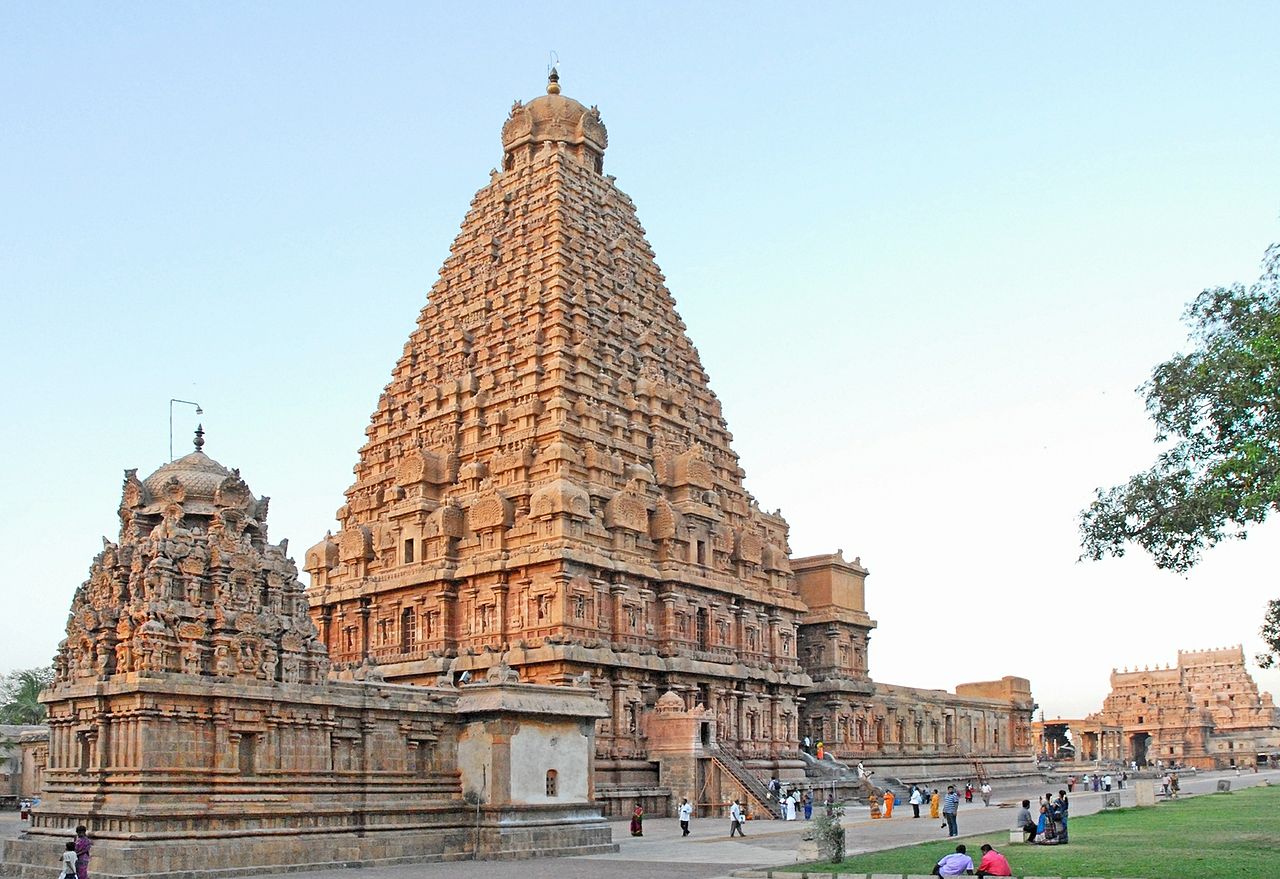 Visit Thanjavur: Is Thanjavur Worth Visiting & What Are The Best Tourist Places In Thanjavur In Tamil Nadu (2022)

Earlier known as Tanjore, Thanjavur is the city of temples in the southern state of Tamil Nadu. Thanjavur occupies an important place in history, as it was the capital of the great Chola Empire during its prime. Today, Thanjavur is a thriving and modern Indian town, but with rich glimpses of the past at every corner. Even today, thousands of people gather to worship at the grand Brihadishwara Temple of the Cholas, and the city’s royal palace preserves memories of these powerful dynasties and their royalties as if frozen in time.

What is Famous in Thanjavur?

Thanjavur is the cultural hub of Tamil Nadu and is famous worldwide for its renowned Tanjore paintings, handicrafts and antiques, sarees and textiles, Carnatic music, and the many ancient temples.

Is Thanjavur Worth Visiting?

Yes, indeed. Thanjavur is a temple city that is known for having some of the most magnificent examples of the great ancient architecture in South India. If you want to travel down history lane, then Thanjavur is the perfect place to visit. Let’s take a look at some of the best places to visit in Thanjavur.

What are the Best Tourist Places in Thanjavur?

This is Thanjavur’s biggest attraction, one of the most revered and well-known temples in all of South India, and it is also a UNESCO World Heritage Site.

The remarkable thing about Brihadishwara Temple in Thanjavur is that it is over 1000 years old and has withstood the brunt of numerous earthquakes. Built by the Chola King Raja Raja I out of granite sometime in the 11th century, the Brihadishwara Temple is a massive symbol of the Chola dynasty’s unrivaled might and spread over this region.

The Brihadishwara Temple is part of the Great Living Chola Temples, all of which are UNESCO World Heritage Monuments. The Airavatesvara Temple and the Gangaijonda Cholapuram temple are the other two temples that make up the Great Living Chola Temples. They are located 70 kilometers and 40 kilometers to the northeast of the Brihadishwara Temple, respectively.

The Brihadishwara Temple in Thanjavur is protected by deep trenches on both sides and the Grand Anaicut River runs through one side. The shrine alone is a 216-feet structure, with a colossal statue of Nandi the Bull welcoming devotees at the entrance. Dedicated to Lord Shiva, the sanctum of this temple is full of paintings from the Nayak and Chola period.

Made from granite, the vimana tower of the Brihadishwara Temple located above the sanctum is said to be the tallest in all of South India. In fact, at the time of its construction, in all likelihood this tower was one of the tallest structures in the world.

The Brihadishwara Temple in Thanjavur is also known for its massive corridor and for having one of the biggest Shiva lingams in India.

Apart from the Shiva lingam, the complex also has shrines dedicated to Nandi, Goddess Parvati, Kartikeya, Ganesha, Dakshinamurti, Varahi, Chandeshvara, Sabhapati, and others.

The Brihadishwara Temple is not just the most visited tourist attractions in Thanjavur but also in all of Tamil Nadu. 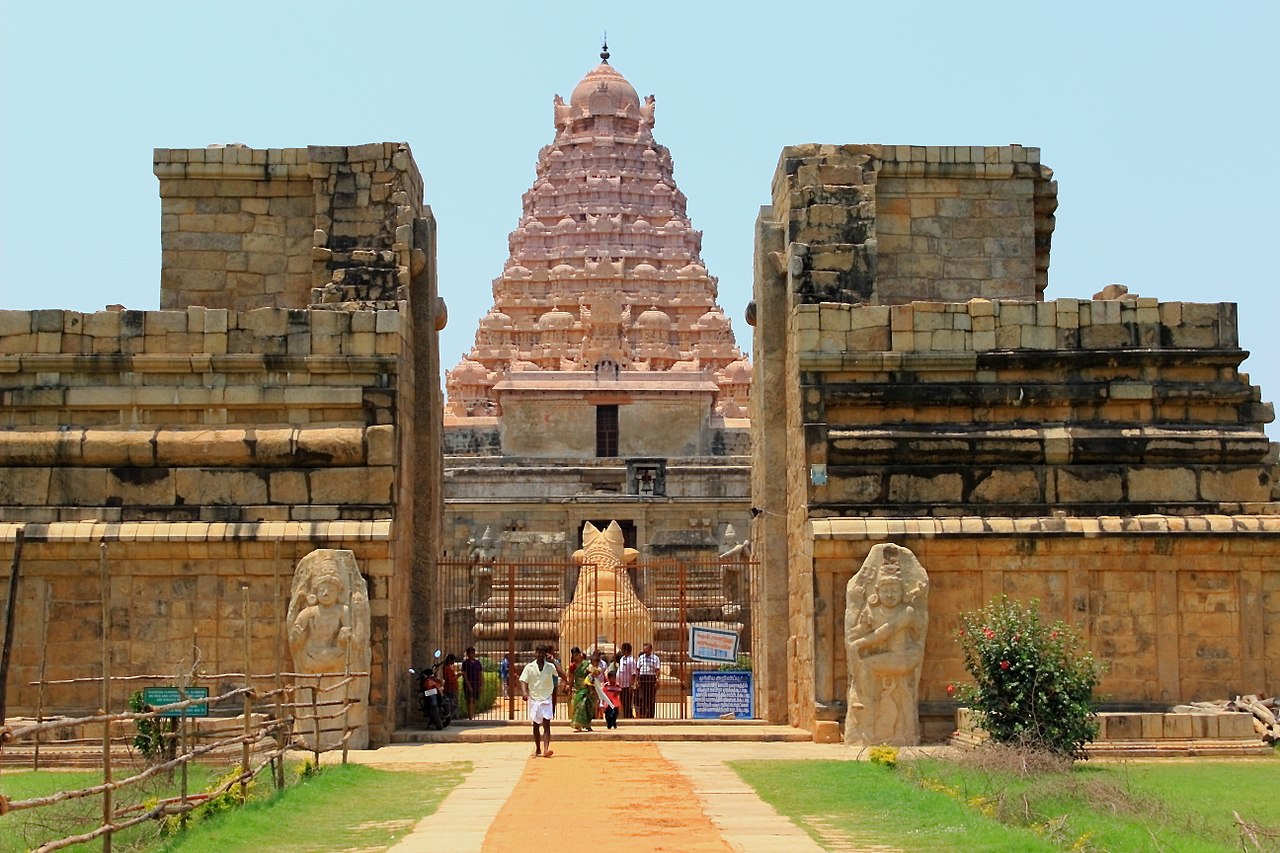 Image Source
The Gangaikonda Cholapuram in Thanjavur used to be the capital city of the Chola Empire for over two centuries. The place holds remarkable historical importance as the Gangaikonda Cholapuram was witness to the beginning of one of the greatest reigns in the history of South India. However, today, this great city has been reduced to just a small villa with a small Shiva temple in the center as a symbol of the erstwhile grandeur that the walls witnessed.

The best time to visit this tremendous architectural marvel in Thanjavur is during the months of November to January since the weather is pleasant and ideal for outdoor sightseeing and humidity is also very low.

It is recommended that you carry your own water and a packed lunch when visiting Gangaikonda Cholapuram as there are not many shops r restaurants are available there.

The Shiva Ganga Garden in Thanjavur is a very well maintained garden that is a delight to visit. Located within the premises of the Vijayanagar Fort, the garden is open to public. There is a square tank situated in the garden that was built in the 16th century to provide water supply to the Tanjore Palace. Surprisingly, this tank is still in use today and is famous for having sweet tasting water. 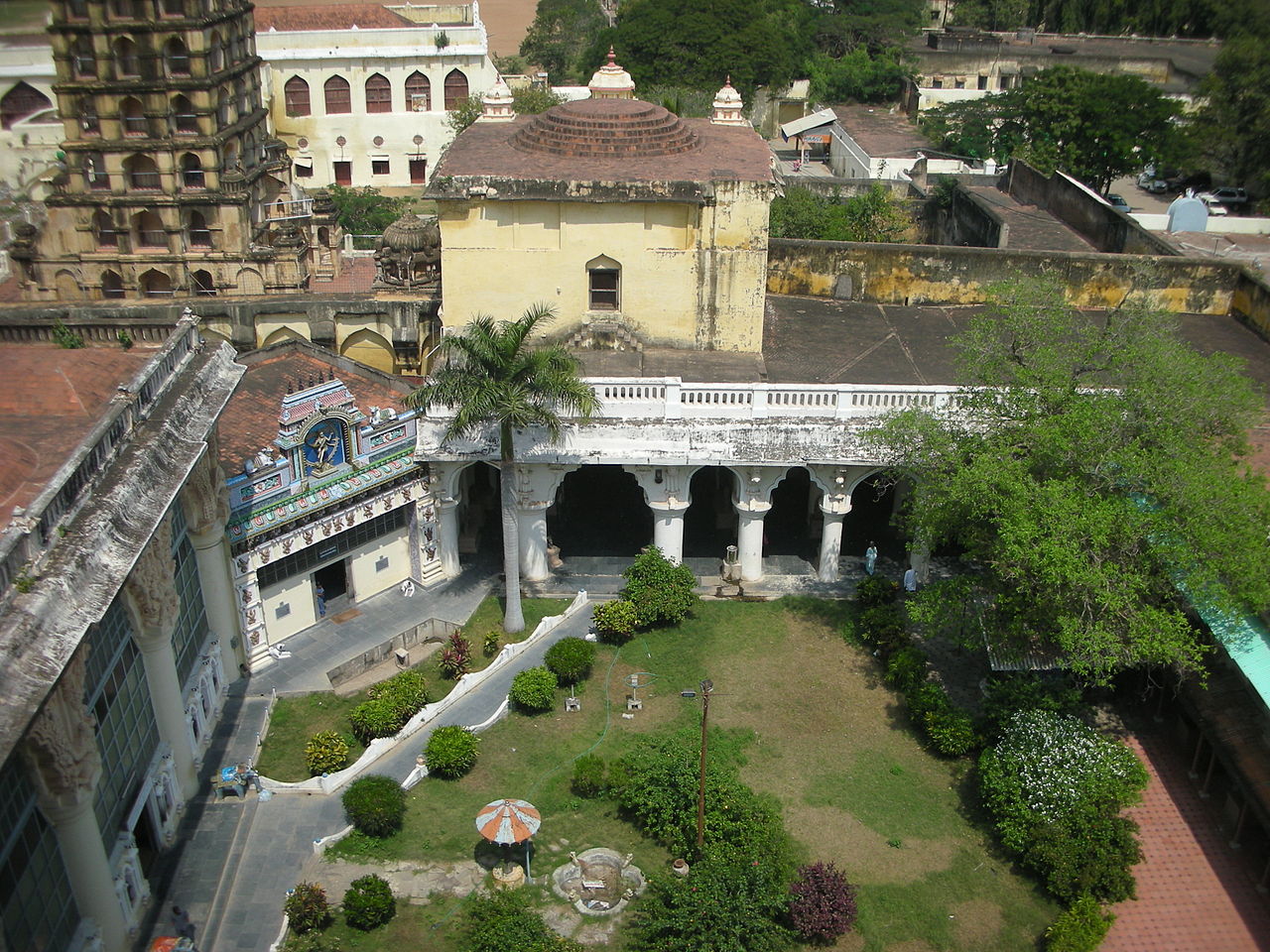 The Thanjavur Maratha Palace Complex is a sprawling 10-acre royal palace that is located very near to the Big Temple on East Main Street. The main attraction of the palace is the beautiful view of its ornate exterior you get from the road itself. However, if you head on inside expecting to see the same type of architecture, you are in for a disappointment as over time, the architecture of the Thanjavur Maratha Palace Complex is no longer the same. 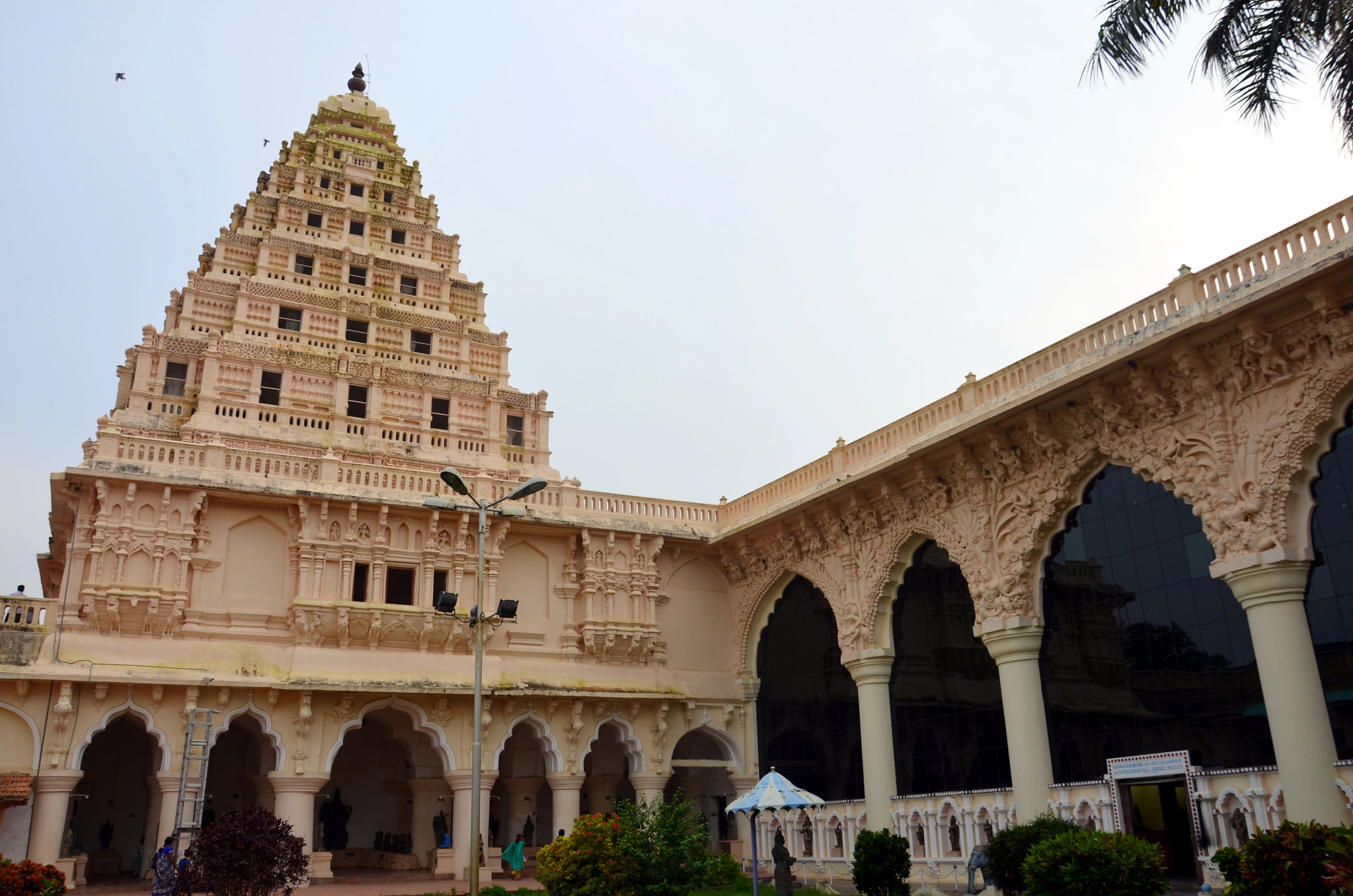 However, there are still many other exciting things to check out here. The lack of opulence in the interiors is because the palace was initially constructed to be a fort by the Nayak Dynasty rulers in the 16th century. The Marathas, over time, renovated the palace and enlarged it further, and many descendants of the royal family still reside in one portion of the palace even today.

The present royal family has put on display various personal regal memorabilia in the private Rajah Serfoji II Memorial Hall museum, which opens daily from 9 am to 6 pm.

The most spectacular sight at this palace is the colorful Durbar Hall, which has some of some beautifully painted pillars and arches.

You will need to purchase an entry ticket for the whole palace complex. Tickets are priced at Rs. 50 for Indian tourists and Rs. 200 for foreigners. If you want to use a camera, you will need to pay additional fees.

The Vijayanagar Fort is another famous tourist attraction in Thanjavur. It is also located just two kilometers from the Brihadiswara Temple. Built by the Nayak Dynasty, this majestic fort was renovated and enlarged by the Maratha rulers in early 1550 AD. 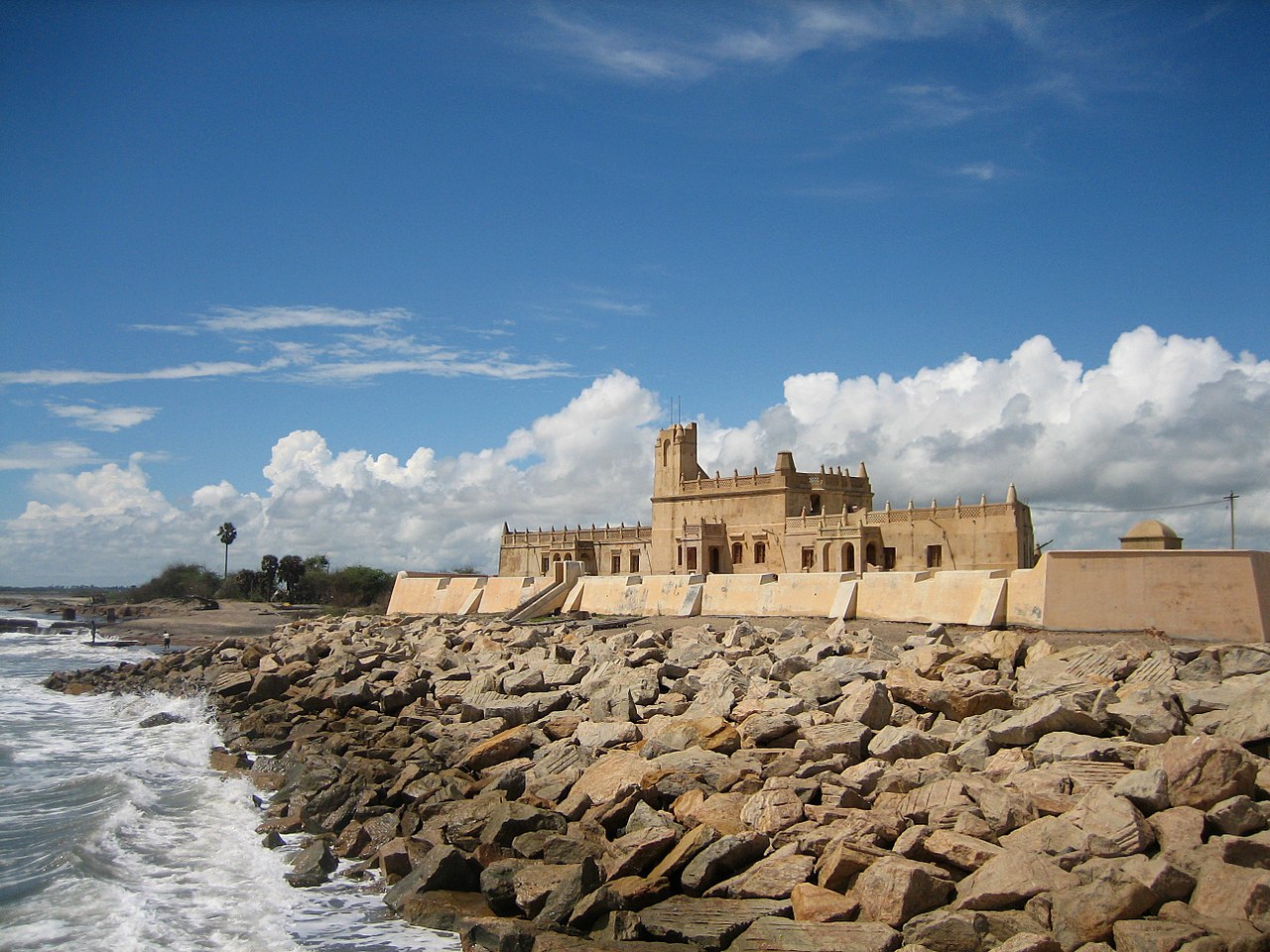 The fort complex includes the Tanjore Palace, Sangeetha Mahal, a library, and an art gallery that includes many paintings and sculptures from the original heydays of this fort.

Though today the fort is mostly in ruins, the royal grandeur and strength still echo from its corridors even now.

When you are in Thanjavur, don’t complete your Thanjavur Tour before seeing one of the oldest libraries in Asia. This government-run medieval library is also known as Thanjavur Maharaja Serfojis Saraswathi Mahal Library. The library is said to have been established in the 16th century during the reign of the Nayakas. Some of the famous collections of the library include a rare collection of palm leaf manuscripts on display, some of the first papers written in Sanskrit, Tamil, and some other indigenous languages of India. The collection of the library has over 49,000 volumes of ancient books, though only a small part of this is on display. 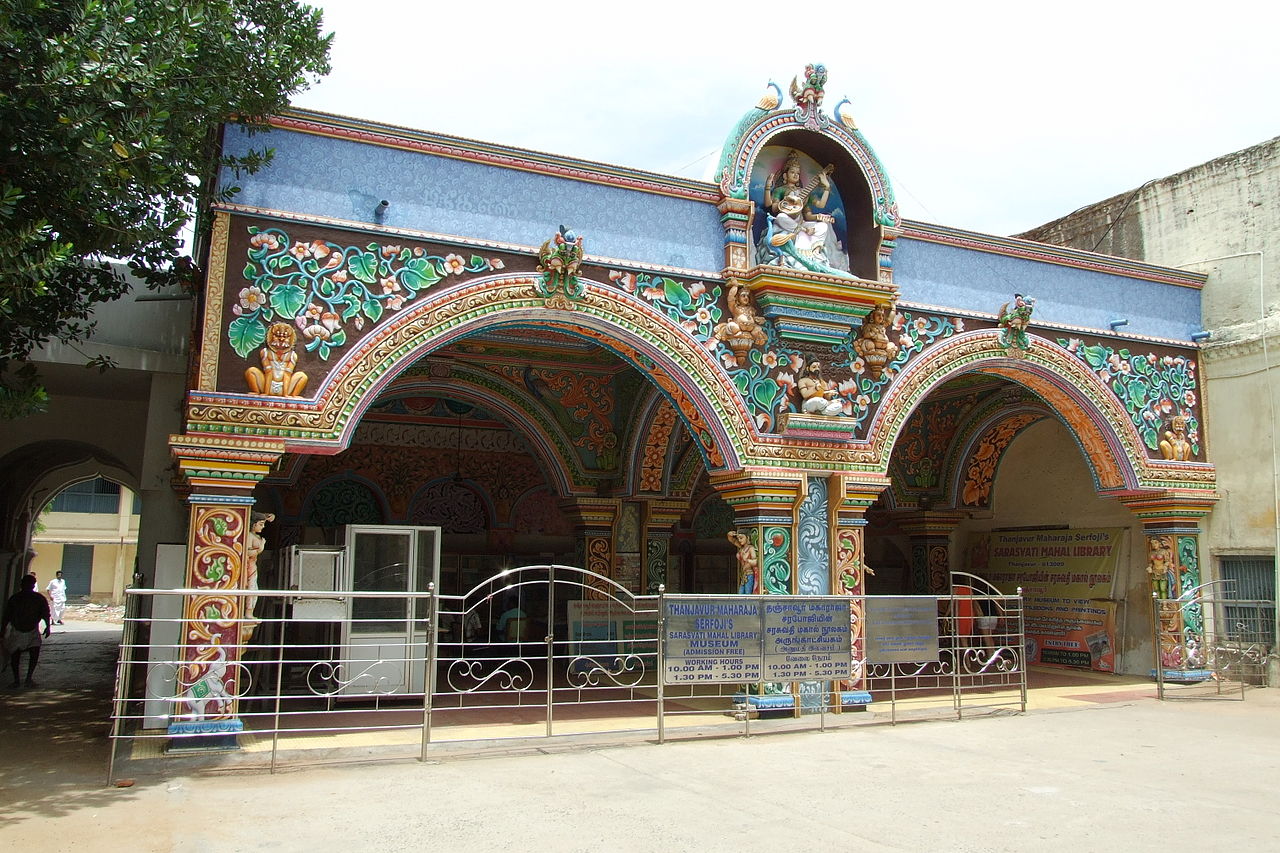 The Saraswathi Mahal Library in Thanjavur is open to the public, and it is also one of the rare places in India that even today supports the publishing of rare manuscripts from their collection. The staff here takes painstaking efforts to preserve their collection on microfilm.

The temple city of Thanjavur is one of the top places to visit when you are in Tamil Nadu. No trip to Southern India can be complete without a visit to Thanjavur. The many rulers of Thanjavur, from the Cholas to the Nayakas, have ensured that Thanjavur transformed into a central cultural hub of India, and even today, the city continues to attract artisans and performers from all over the country. 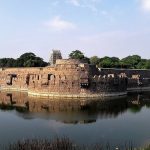 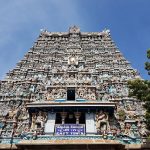 Visit The Mesmerizing Meenakshi Temple in Madurai (2022) Next