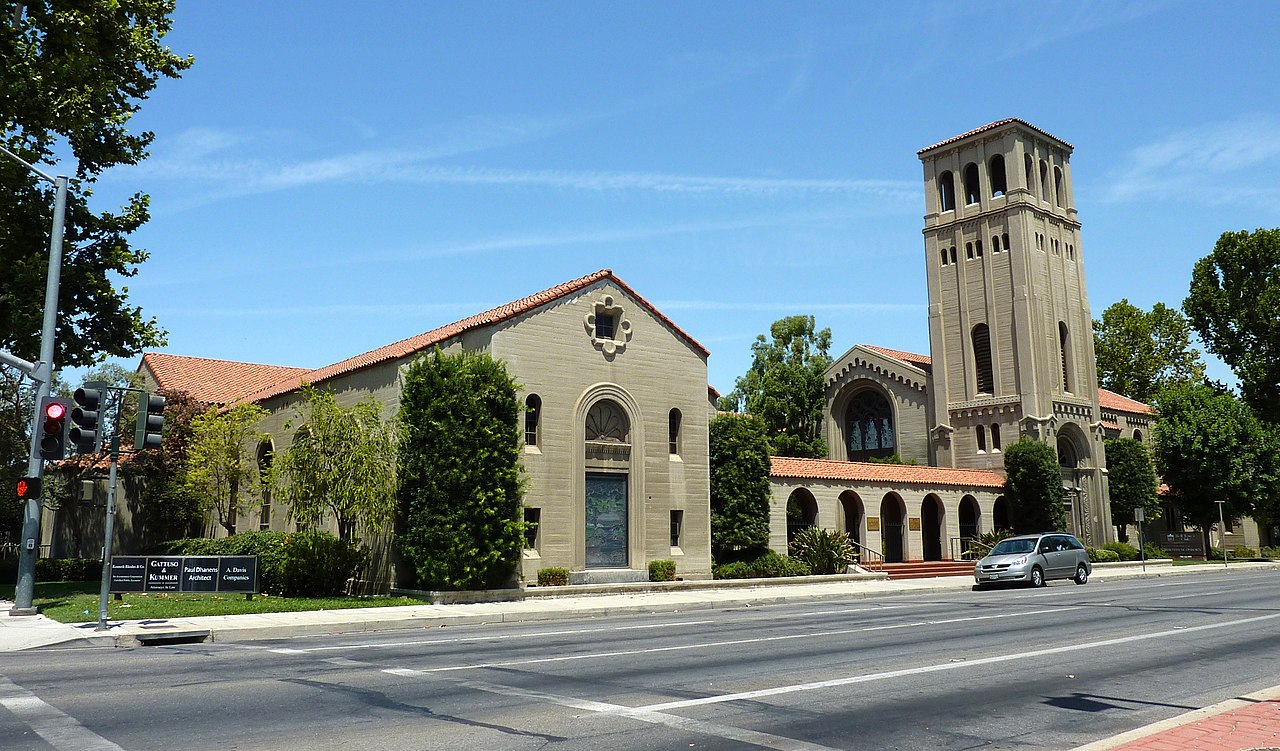 7 Amazing Historical Places and Landmarks to Visit in Bakersfield (2022)

Bakersfield is the largest city of Kern County, located at the southern end of the Central Valley. It is a city known for endless outdoor activities and an array of historical sites. It is one of the richest agricultural regions in the world and also noted as California’s oil capital. The history of this famous Californian city holds much about the discovery of oil and discovery of the Kern River oil field, which later brought reform in the entire Kern County and also showed visible effects on the State.

Bakersfield is home to some really exciting historic sites registered at the national, State, and city levels. Despite the damage from the earthquake of 1952, much of these sites have been restored and are today serving as important tourist spots in the city. Have a look at the 7 Most Popular Historical Places and landmarks to visit in Bakersfield.

7 Amazing Historical Places and Landmarks to Visit in Bakersfield

One of the most popular historical landmarks in Bakersfield, the Kern County Museum celebrates the rich culture and history of the county. It is located on Chester Avenue and is spread over an area of 16 acres. The entire location consists of over 50 original historical buildings that relate back to the 19th century. It plays a major part in the early days of California, and today you can learn here about Native Americans, the Golden Rush, agriculture, mining, the railroad, the first oil derricks, one-room school, the early settlers of State, and much more. A visit here takes you near thousands of historically and culturally significant artifacts that are neatly exhibited on 16 meticulously landscaped acres. 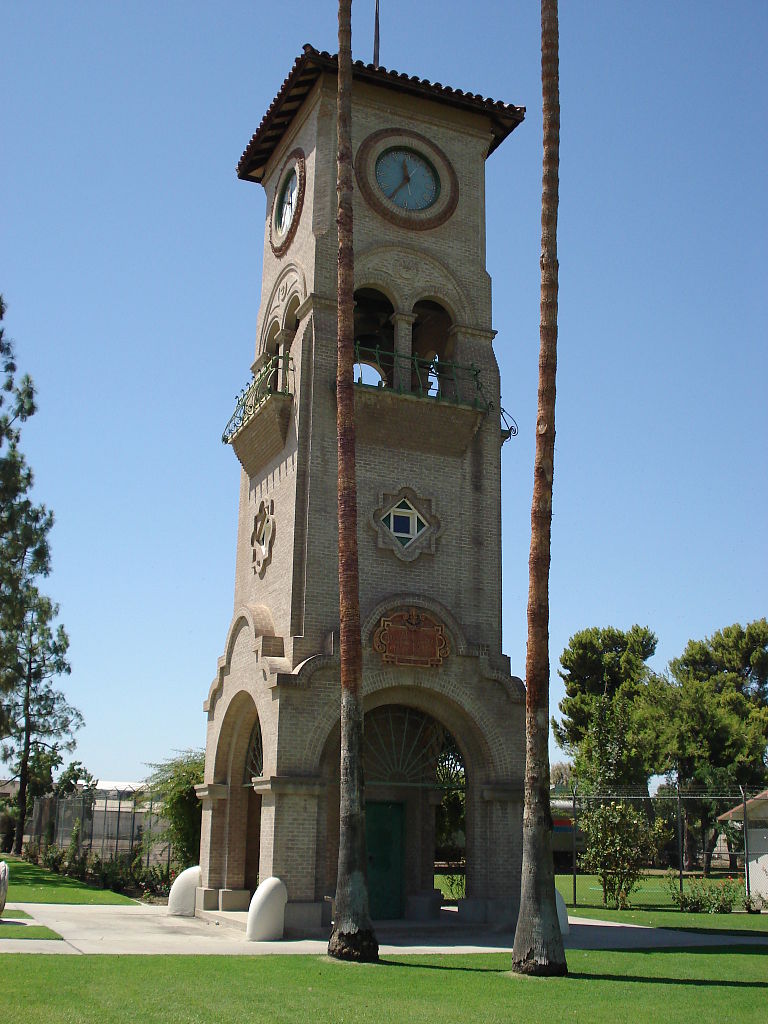 Some of the most recognizable structures and sights that you must not miss in your visit to the Kern County Museum are the Beale Memorial Clock Tower, the Pioneer Village, the Black Gold exhibit, and the Lori Brock Discovery Centre. While going back, you can shop from the Artisan Market as well. Considering it is a huge sight, make sure you take at least 2 hours in hand to explore nicely.

One of the sights that hold significant importance in Bakersfield history is the First Baptist Church. Located in downtown Bakersfield, it is also known by the name “Bell tower” and holds its history back to the year 1931. It is one of the great examples of decorative concrete structures in the San Joaquin Valley. It is basically a structure built of reinforced concrete with red, Spanish tile shingles covering the roof. The robustness of its engineering can be measured with the fact that the church smoothly survived the 7.3 Richter Kern County earthquake in the year 1952.

First Baptist Church is registered National register of historic places; however, presently it is used as an office building. The church, its bell tower, and the landscaped courtyard are surely a delight to watch when in Bakersfield.

Noted as the Best tourist spot and historical sight in Bakersfield, the Fox Theatre is something that you cannot afford to miss. The treater dates back its history to the early years of the 1900s and is also one of the last built in the Gilded Age of cinema. The exteriors of the building are inspired by the Spanish Colonial Revival style, whereas the interiors have a mix of the Mediterranean and most of the Art Moderne style. 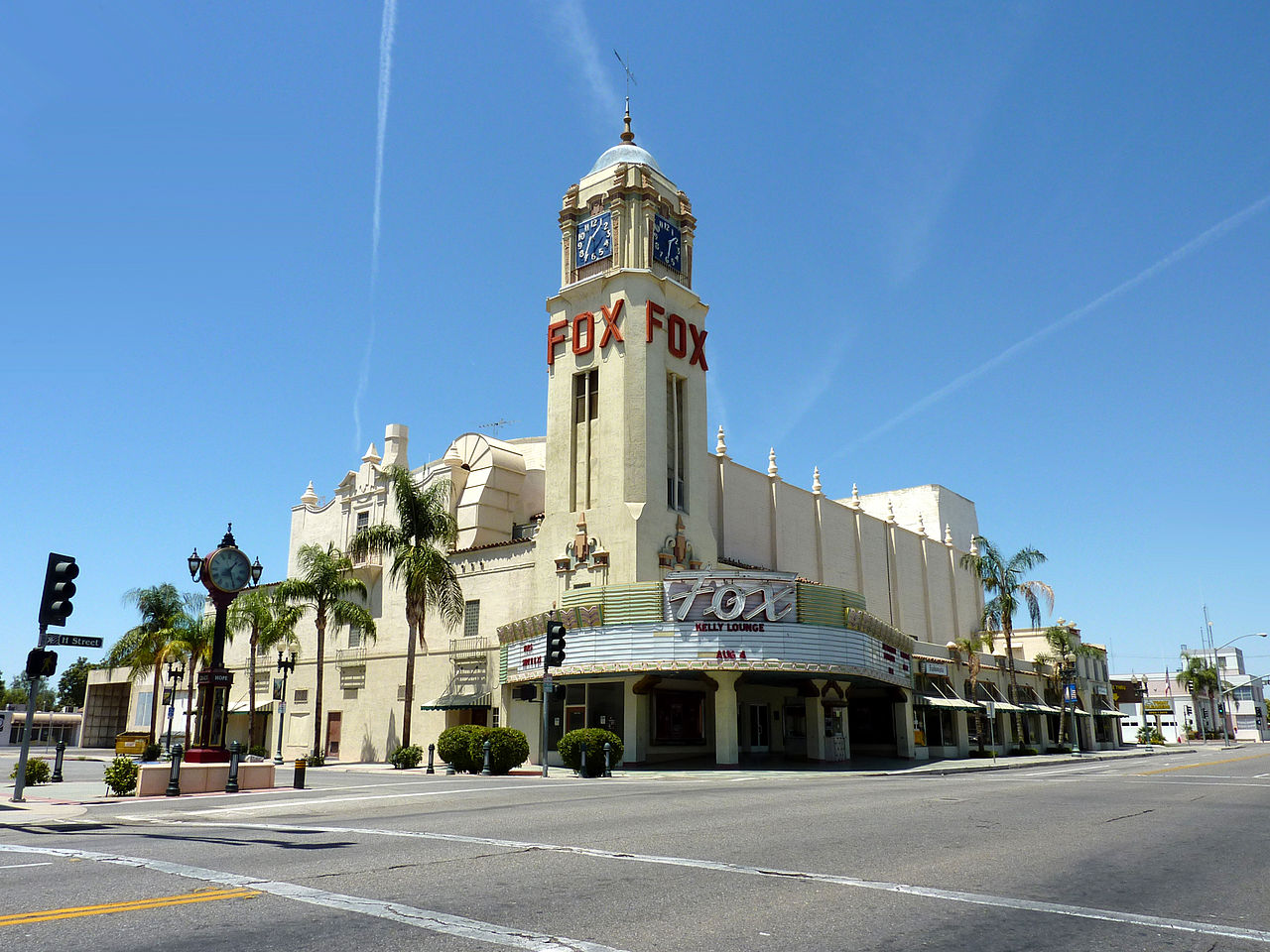 Today the Fox Theatre is a famous spot for live shows with top musicians, comedians, ballets, pop artists, and rock performers. Visit here anytime from fall to spring and be a part of the international film screening or plan for evening hours and enjoy the astonishing performance by the local artists.

Beale Memorial Library, which is also known as the Baker Street Library, is the oldest library in Bakersfield that holds its history back to the early 1900s. It is built in Classical Revival style with an elaborated interior inspired by classical and Renaissance themes. The library building is the only surviving building in Bakersfield, which was designed by Clark. 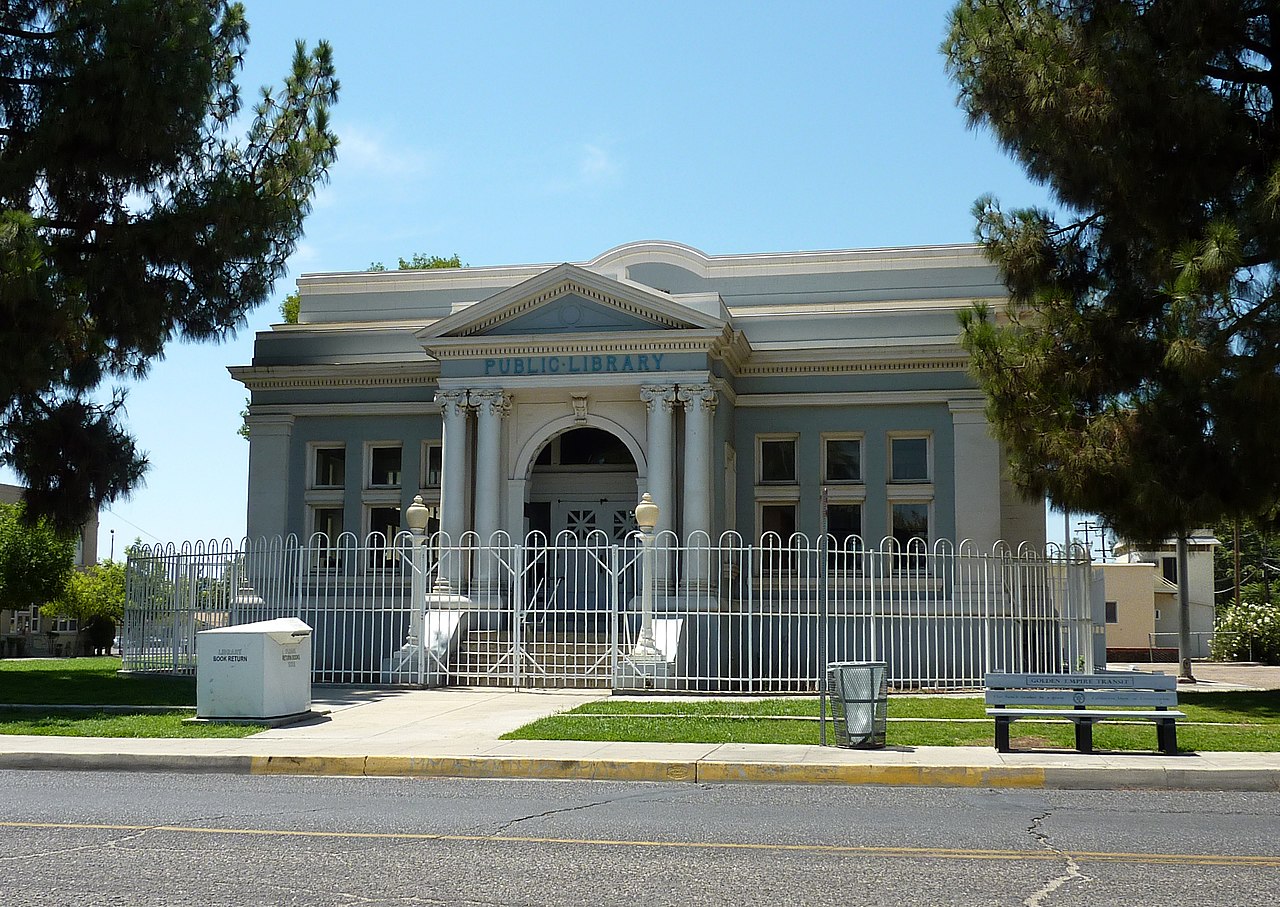 Beale Memorial Library is located at 1400 Baker St. and is open for both local and traveling visitors. The building has two wings at the east and west ends and a central block. The main entrance is on the east wing. One can spare some hour a visit the library either to read a book or simply appreciate the interiors of this historical sight.

The Grace Memorial Circle, or simply The Circle, is one of the prominent State Historical Landmarks located in Bakersfield. It is an open-air landmark, basically a Traffic circle right at the intersection of 30th Street, Golden State Avenue, Chester Avenue in Bakersfield. There’s a huge 22 feet Father Francisco Garces sculpture in the center of the circle, which is originally a work of the famous American sculptor artist John Palo-kangas. 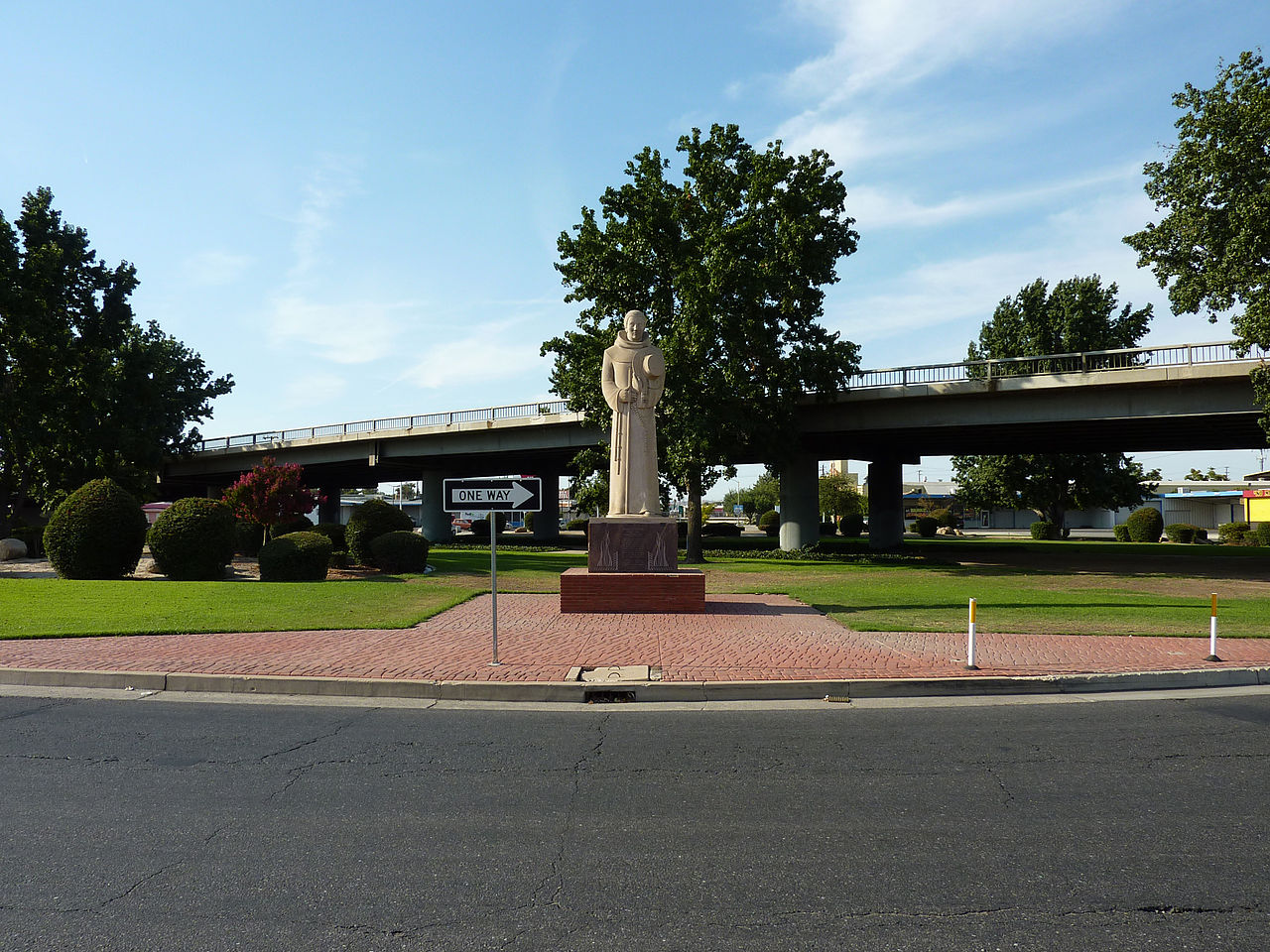 It is one of those sights which does not require hours and effort for visiting. While you are driving past the sight, you can simply stop, spend some minutes and click some pictures for memory here.

Gordon’s Ferry Historic Landmark serves as both a historical site and a geographical landmark in Bakersfield. It is located southeast of the Kern River bridge, on China Loop 1,000 ft South of the Round Mountain Road. The sight is named after the ferry that was operated during the 1850s by Major Gordon. It was operational for a few years; however, it was later abandoned and left as a geographical sight.

Today you can find locals fishing aur strolling here all throughout the day. It is a good place to fish for smallmouth Bass, even some large ones as well. Though it isn’t a great place for swimming and thus it is always better to refrain from doing so.

Korean Veterans/ War Memorial isn’t precisely a historical landmark but a sight dedicated to the unforgettable war history of Kern County. The Memorial is dedicated to the American soldiers, dedicated the ones from Kern County who fought for the Korean War (1950 to 1953), which is also known as “The Forgotten War.” It is located at the corner of Truxtun Ave. and S Street, right in downtown Bakersfield. Adjoining it is the Beale Memorial Library and the Beale Memorial Library. 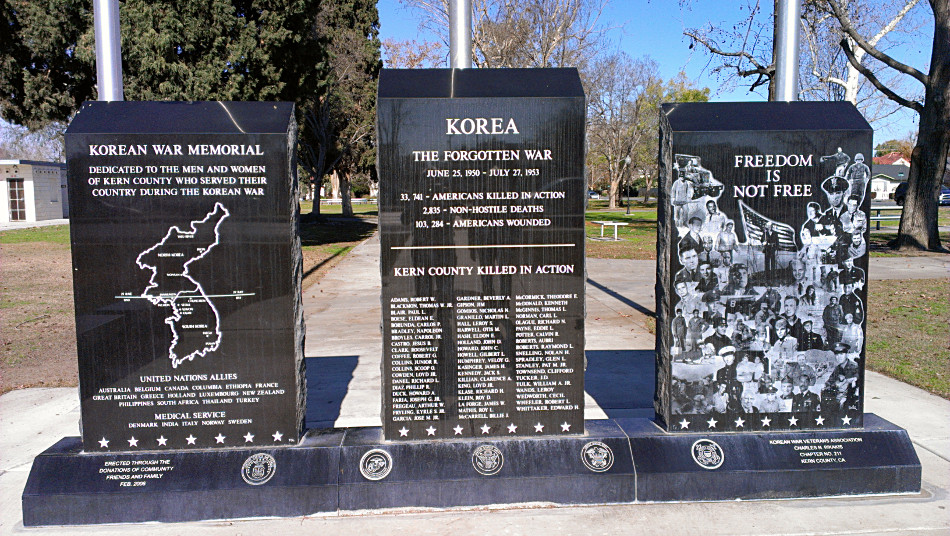 The Bakersfield Korean War Memorial is basically a huge regional park with three black granite shafts fixed on a three-meter-long pedestal. One can take a stroll of the sight any time of the day and remember the soldiers who lost their lives. 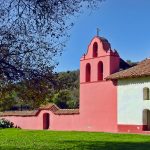 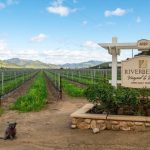 8 Top-Rated Wineries and Vineyards in Santa Maria (2022) Next