With a rich history and vibrant culture, Nawada is one of the most beautiful regions of Bihar. The town is located in South Bihar and is currently the district headquarter by the same name. During the time of Magadhan reign, Nawada was an essential part of India. The city saw many prominent rulers, including Brihadratha, Kanah, Maurya, Gupta, and others. Even in the history of the Indian National Movement, this city played a crucial role. The town witnessed a lot of disruption when it first got acquired by the East India Company from King Hisua in 1845. Later, the city erupted when the marauding parties ruled there in 1857 during the time of Sepoy mutiny. When you visit Nawada, you will get to learn a lot more about the city. Apart from the historical aspect, Nawada is quite sacred for the Hindu and Jain community as well.

Even though the town was more important to the Hindus during the Palas rule, the Jain community later became interested in Nawada due to the presence of many sacred Jain sites. According to local folklore, it is believed that Lord Krishna and his queens visited Nawada to take a bath in the holy waters of the Khuri River. Many even believe Mahavir’s disciple attained salvation in the Pawanpuri area of Nawada. That is why festivals like Janmashtami, Mahavir Jayanti, or Chatt Puja are celebrated quite widely in the region.

Reaching Nawada is pretty easy by trains as the railway station situated over there is well-connected to Bihar’s other major towns. But if you want to visit there by plane, you will have to arrive at Patna or Gaya as those are the nearest airports from Nawada. As the distance between Patna and Nawada is around 100 km, you will have to rent a car to reach there. If you want to explore the region of Nawada comfortably, September to March is the best month. The climate will be more favorable during that time. This blog will provide you with information about the best places to see in Nawada in depth.

The sites mentioned in the following part of this blog are quite beautiful and essential to Bihar’s culture and natural diversity.

Founded by the imminent leader Jayprakash Narayan in 1952, Sekho Devra Aasram is one of the most notable places to see in Nawada. The Ashram is located in a secluded area from the Sekho Deva village. When you visit the Ashram, you will notice that it is situated on some rocks’ foothills. As the entire area is surrounded by lush greenery, the scenic beauty surrounding it is quite astounding. Moreover, the Ashram is located around 55 km from the nearest village of Sekho Devra, and the route is quite scenic.
Jayprakash Narayan built this Ashram to pay tribute to when he hid behind the rocks located near the building. He was fleeing from Hazaribagh jail in 1942 when he spent his days hiding behind the rocks near the jungle. Many people prefer to live in the Ashram’s different huts, but you must know the living conditions over there are not that good. As there are no modern amenities available, you might not feel comfortable spending your time there. But the entire area is filled with natural beauty and wildlife. Some have even claimed to encounter deer, foxes, and even cheetahs during their stay in the Ashram. 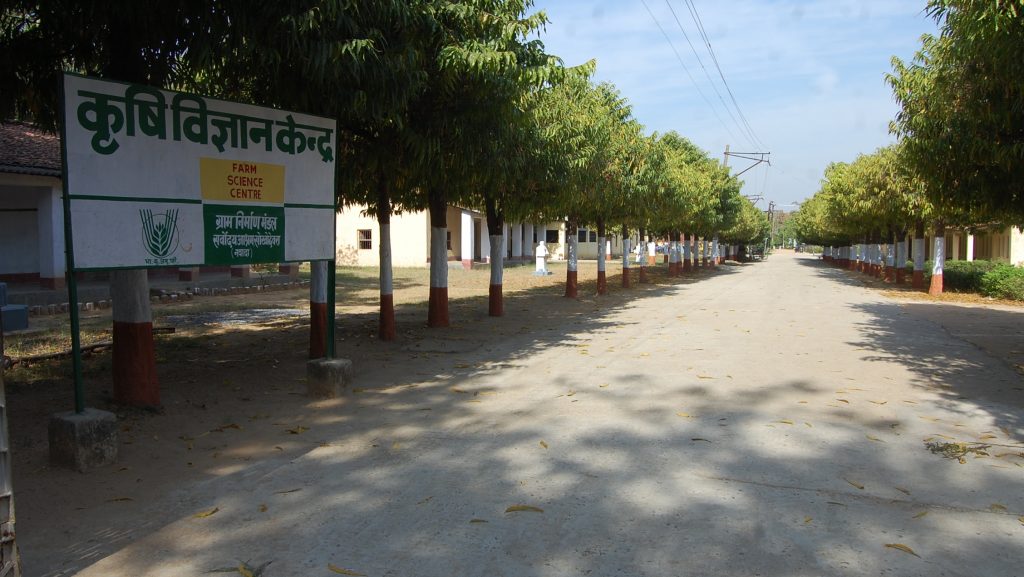 The distance between Sekho Devra Ashram and Nawada: 46 km.

Situated right by the Kakolat foothills, Kakolat waterfall is one of the most beautiful waterfalls in Bihar. Several tourists and locals visit the waterfall as it is gorgeous. As the height of the falls is around 150 to 160 feet, you will notice that the cascading water’s intensity is relatively high. Moreover, the area is located only 33 km from Jharkhand, that is why tourists and locals from that state visit the waterfall. Like most sites in Bihar, the Kakolat waterfalls in Nawada has some mythological stories attached to it. Many people believe that king of Treta Yug resided by the falls’ foothills as a python after being cursed by a Hindu sage. When the Pandavas arrived there to spend their time of exile, the King freed himself from the curse and declared that those who bathed in the Kakolat fall would never be reborn as a snake.

The said mythology is one of the main reasons why tourists flock the waterfall throughout the year. Many travelers from Bihar and other parts of India visit the region to spend the summer vacation. The area surrounding the waterfall is one of the best places to go picnicking in Nawada. People visit there during the summer because of another reason. The famous Chait Sankranti fair is held there in April or May. People bathe in the water, but they also take part in the three-day festival near Kakolat hills. As the fall volume is relatively high, the reservoir located below it acts as the primary water supply source for the local people over there.

The distance between Kakolat Waterfalls and Nawada: 33 km.

Located in the town of Nawada, Nardah museum was founded in 1974 by the then district magistrate, Shri N. P. Singh. You will be surprised to know that almost all the artifacts which can be witnessed inside the museum all belonged to the said I.A.S. Officer. He donated all of his findings to the Government of Bihar. When you visit there, you will notice some interesting and unique artifacts from the time of Palas and other ancient reigns. In the museum, you will see paintings, old metal objects, coins, stone pieces with the Pala dynasty’s inscription, and many more. If you are a history buff, you will genuinely like this small museum. 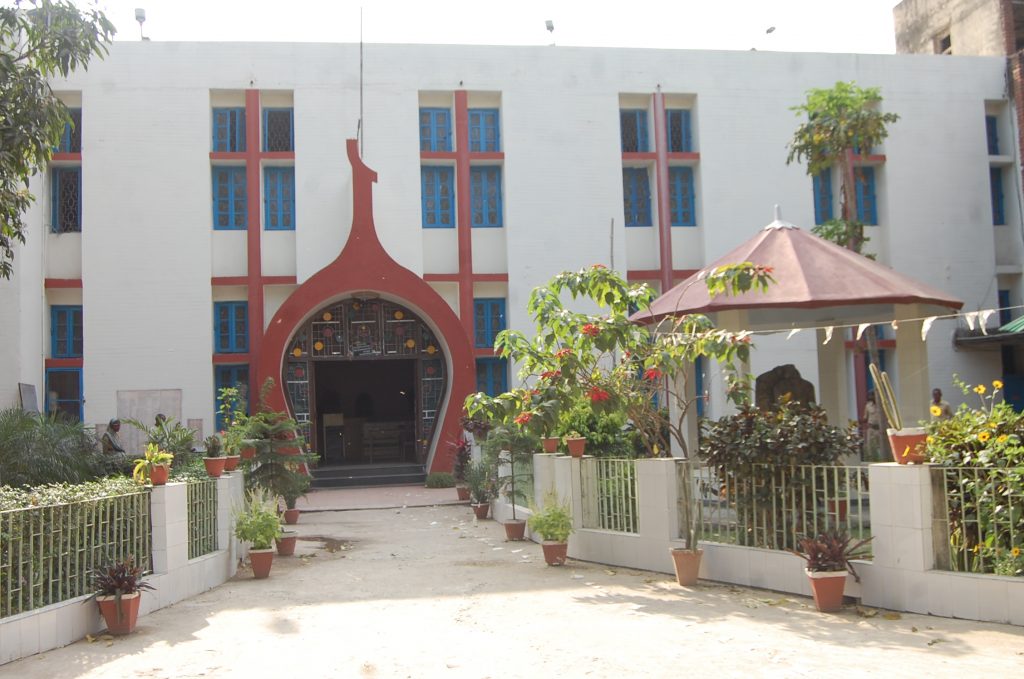 The distance between the Nardah museum and Nawada: 10 km.

Commonly known as the Rajgir peak, the Griddhakuta Mountain is one of the best places to see in Nawada. Most people visit this site whenever they are visiting Rajgir or Nawada. Not only is the peak stunning, but it has a religious significance also. In this location, Lord Buddha performed his preaching. The Vishwa Shanti Stupa is located quite close to this hill. Most tourists visit the Stupa by taking the ropeway from the mountain. While exploring this hill, you will find three different caves. 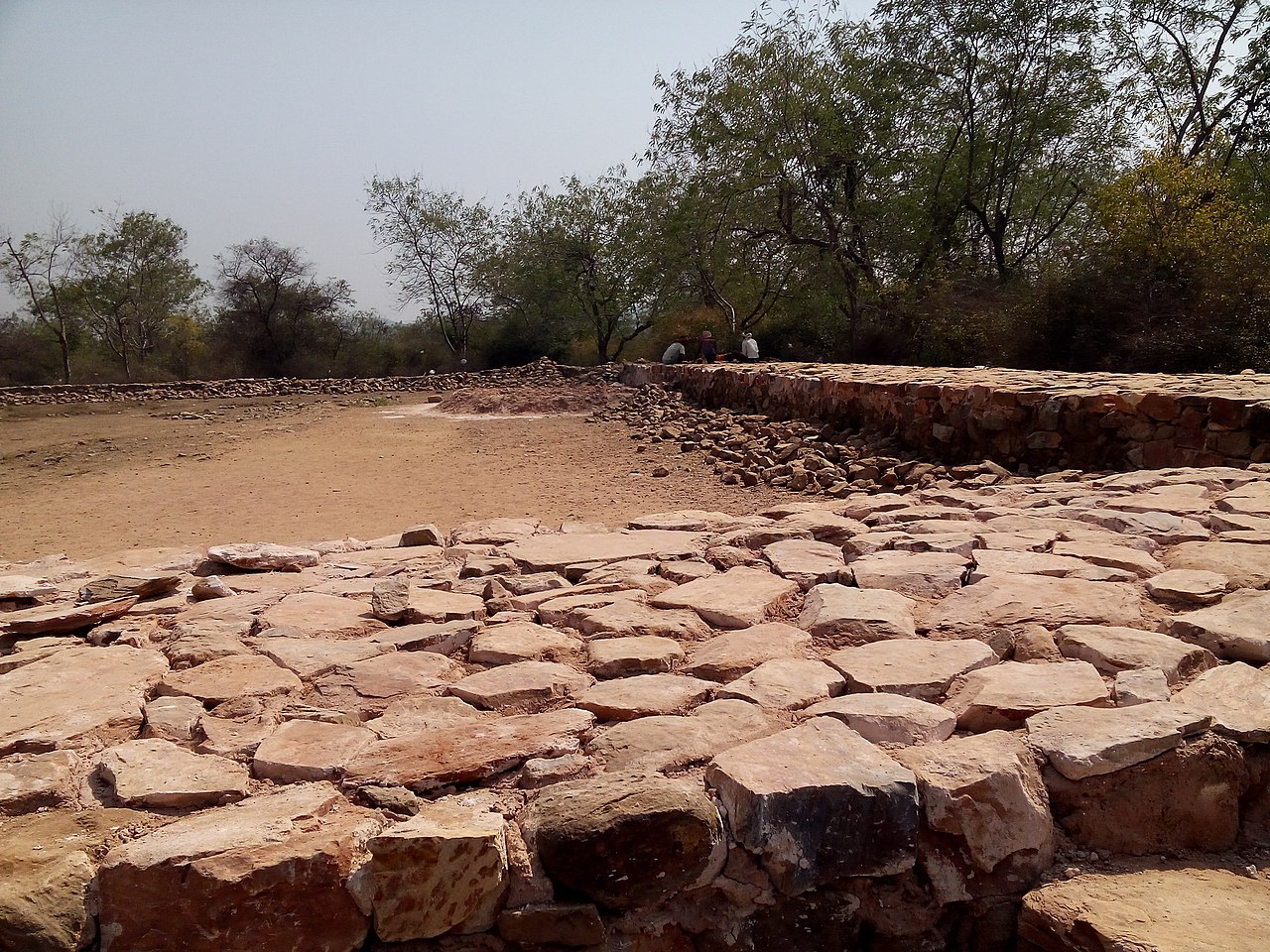 People believe that in this caves, Lord Buddha and his two disciples Rahula and Sariputta, lived. If you notice closely, you will know that Rahul and Sariputta lived in the first and second caves, respectively, whereas Lord Buddha lived in the third cave. The best time to visit the hill is during the winter season, as you will get quite uncomfortable during the humid summer months. You will be quite pleased with the panoramic view that you will get to see from the peak of the mountain. It is genuinely breathtakingly beautiful.

The distance between Griddhakuta Peak and Nawada: 30 Km.

Founded in 1800, the Budhauli monastery is one of the fascinating places to visit in Nawada. As the Math is located in the village of Budhauli in the Pakribarwan block of Nawada, you will find the location surrounding the monastery to be quite serene and beautiful. Most people visit the Math to see the larger pond located inside it. Local people believe that the pond has been formed by using waters from all the rivers in the world. That is why people feel the water to be quite sacred. 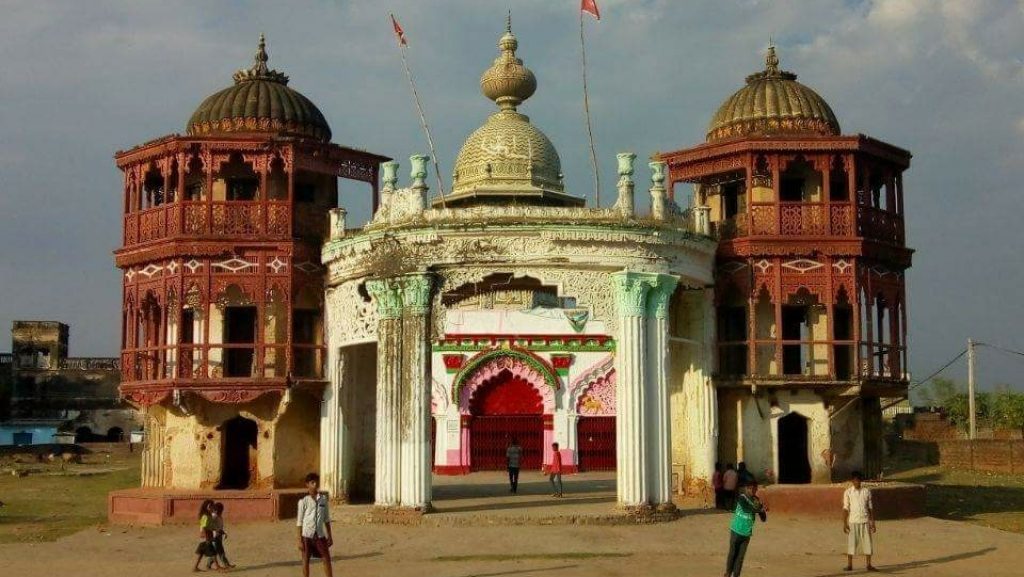 Every Navratri, the Math becomes lit with lights and Diyas. If you visit Navada during that time, you will get to see the worship of Goddess Durga in the Durga Mandir of the monastery. Now, the Math’s glitz and glory have diminished, but in the early days, it was one of the most important places in Bihar.

The distance between Budhauli monastery and Nawada: 31 Km.

Gunawa is a tiny village located in Nawada, which is quite crucial to India’s Jain community. While visiting the town, you will see an immensely important Digamber Jain temple dedicated to the Siddha Kshetra Guwaji. As the temple is located right in the center of a lake, exploring that area will be a unique experience for you. There are forty more surrounding temples located over there, which are all quite important to the Jain people. It is one of the most important Jain sites in India, as it is believed to be the location where Ganadhara Indrabhut Gautam attained his omniscience. 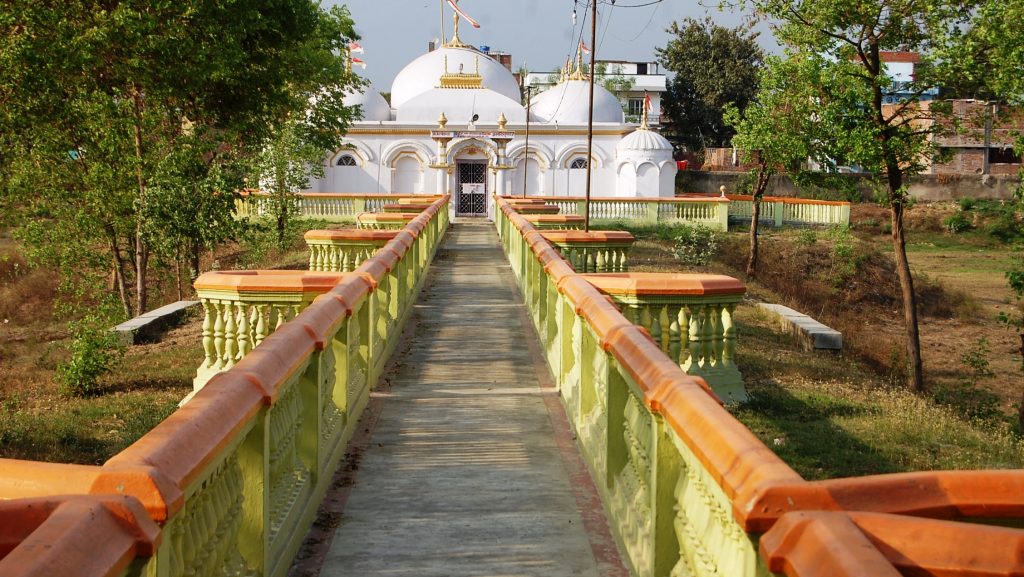 Moreover, while exploring the location, you can also visit the Guniyaji Shri Gautam Swami Mandir, which is located quite close to the Digamber temple. Even if you are not a spiritual person, you will feel quite serene and calm after visiting the temple.

The distance between Gunawa and Nawada: 3 Km.

Rajauli is one of the best places to visit in Nawada because Rajauli Ghat mountains’ gorgeous hills surround it. The entire area is surrounded by lush greenery and small hills. Many people travel to other exciting places like Kodarma or Jhumri Taliya from there.

As the area is located right by the Dhanarjay river, the region’s scenic beauty is even more beautiful. There are many temples situated in the region as well, which are pretty significant to the Hindu community. 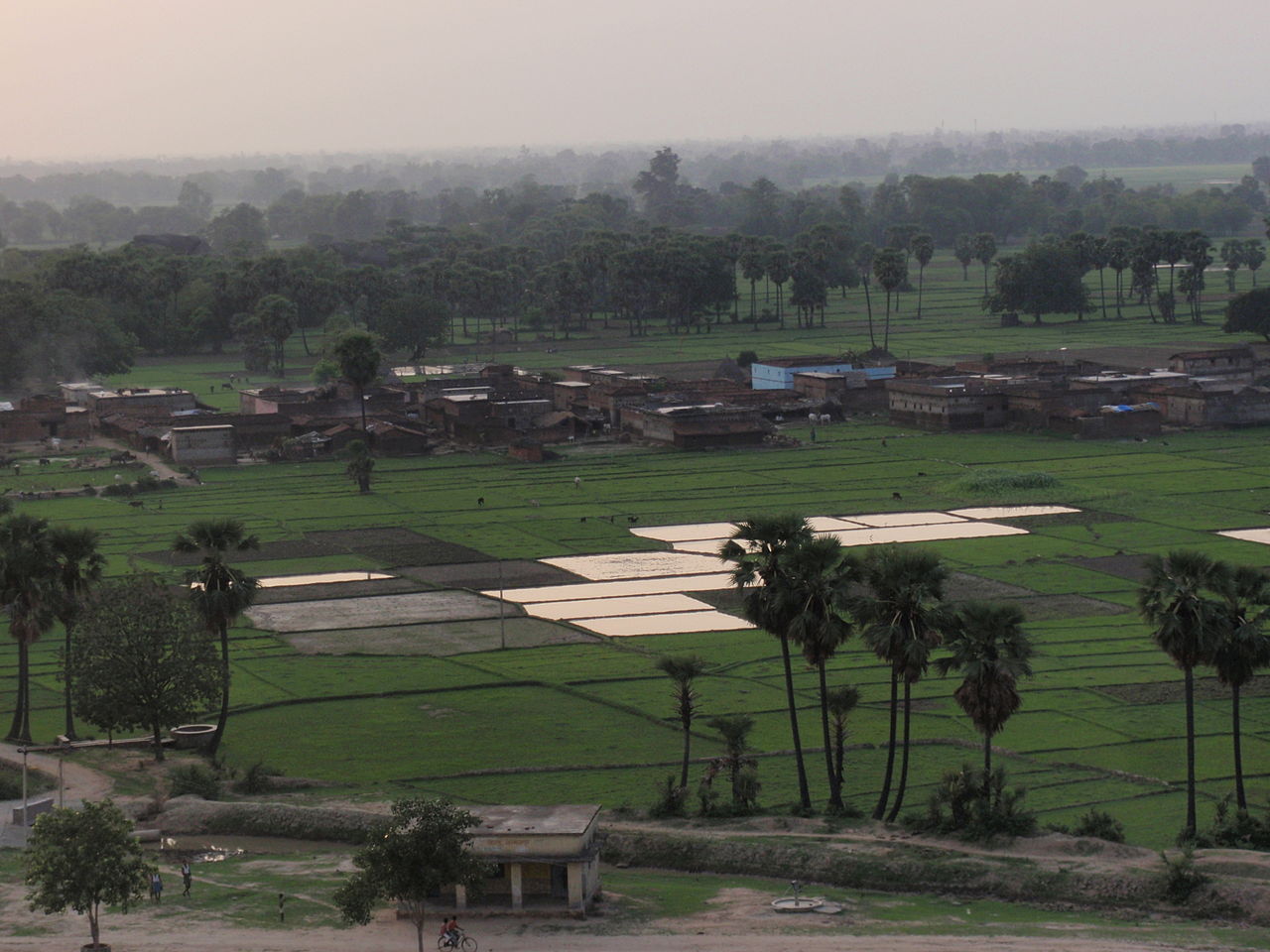 The distance of Rajauli to Nawada: 28 Km.

Mostly known for the famous Apsad Vishnu Temple, Apsad is another essential place to see in Nawada. The temple is not only crucial for religious aspects in India but archaeological elements also. While excavating in the region of Apsad, the Archaeological Survey of India discovered many artifacts that belonged to ancient times. Some of the items included terracotta figurines of humans and animals, glasses, beads, jars, pots, vessels, and many more.

The temple was created because of the discovery of the Vishnu sculpture during the excavation. This area should be on your list of the must-see places in Nawada, as it is unique and vital.

Nawada is an exciting and place in Bihar, which has a lot to offer. You might not have heard about it that much while finding places to explore, but we can assure you that it is unique. While exploring the area, you will learn a lot of history, archaeology, and Bihar and Indian traditions. We have tried to include all the essential places to see over there. We hope you will have a fantastic trip by following this blog. 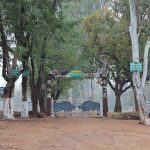 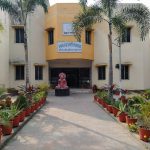 9 Places In Muzaffarpur Which Every Tourist Must Visit (2022) Next