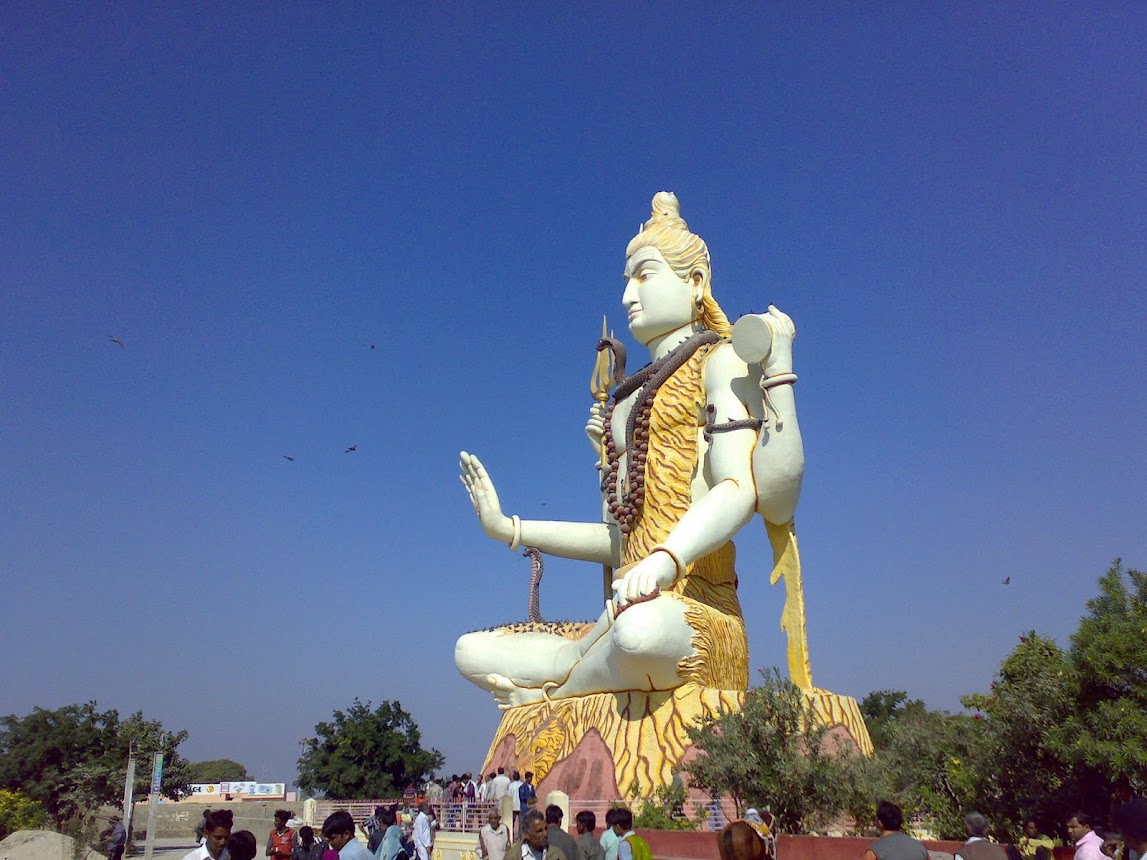 Visit Nageshwara Temple in Dwarka: The Temple with the Iconic Shiva Image (2022)

The Nageshwar Jyotirlinga is in Dwarka and is an important Hindu pilgrimage center. It is one of the twelve Jyotirlinga and finds mention in Shiva Purana, one of the major Puranas, a set of Sanskrit texts that mainly references Lord Shiva. The road to the Nageshwar temple is an open road without much traffic. There’s greenery on both sides, so the ride in itself is a thrilling and memorable experience.

A Jyotirlinga is one of the fascinating aspects of Hinduism as well. According to legend, Vishnu and Bramha disagreed about who’s stronger among the two. Shiva seared a pillar of light throughout the planet. He said that whoever will find out the pillar’s depth will be the strongest. While Brahma lied, Vishnu agreed that he couldn’t find the pillar’s depth. That pillar of light is the Jyotirlinga, which experts believe that there is a total of sixty-four such Jyotirlingas, but we know the location for only twelve. The Nageshwara temple has one of them.

Some legends in Hindu mythology connect to the Nageshwar Jyotirling temple. Legend states that Daruka, a demon harassed the people living in this village. In this village lived Supriya, a devotee of Lord Shiva, who ended up being abducted by Daruka. When Supriya was in captivity, he exhorted everyone to chant Om Namah Shivay. Lord Shiva then saved Supriya. It’s a fascinating legend, but there’s some confusion about the names and the characters, so it’s something that the tourist can explore on their own.

The Nageshwar Temple in Dwarka is a visual spectacle and is the home to the 85 feet tall Shiva idol, which is popular in contemporary culture. The Shiva idol is visible from a distance, and the entry to the temple begins with a deftly decorated arch.

The color combination here is a bit darker than the other temples we see in Maharashtra and Gujarat and is a tone of brown.

The Nageshwar temple is one of the few that have straight forward rules of photography and video shooting. You need to shoot your videos or take photographs from the endpoint of the temple, away from the sanctum sanctorum. A small shop inside the temple sells various artifacts that will serve as a memento of your visit to the Jyotirlinga.
Years ago, music baron Gulshan Kumar had decided to make the temple grander. After his death, his family ensured that the temple work was complete.

There are some other temples in the vicinity that you can visit. There’s a Shani Dev mandir and a Shiv Parivar mandir. If you book a tour, you will also visit the Bet Dwarka Mandir while on the route to Nageshwar Jyotirlinga.

You can spend about an hour at the Nageshwar Jyotirlinga. You will see the locals paying their respects to the Jyotirlinga, an experience in itself.

The authorities are taking good care of the temple, and you have enclosures everywhere, ensuring that the devotees move around in a simple, consistent queue, and darshan completes in a hassle-free manner. The interiors of the temple are mostly white and brown. Unlike the other temples that we see in Maharashtra and Gujarat, there’s no intricate carving or sculptures on the pillars and the walls.

You see the trident that’s at a different location, near the Nandi idol, something unique, as the trident is generally near the Lord Shiva idol. You can spend at least an hour marveling at the arches and looking at the architecture that’s a hark back of a bygone era. 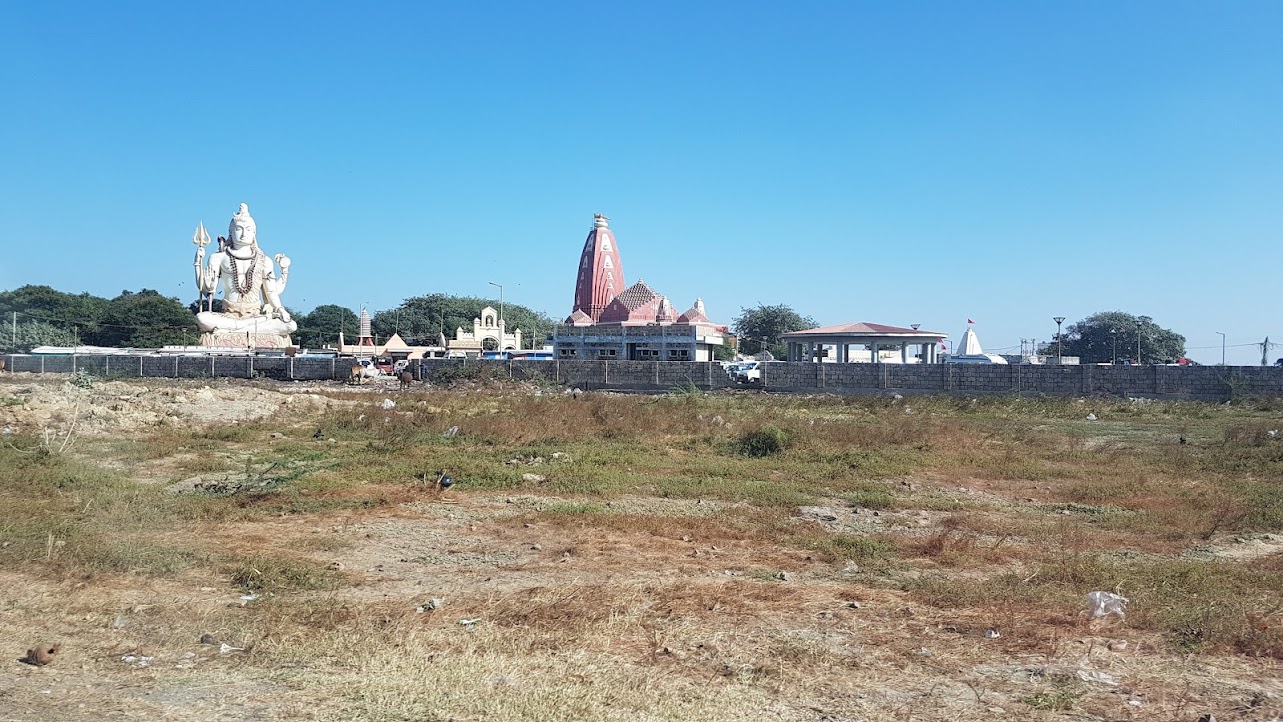 There is a lake nearby the temple, and an idol of the Shaneshwar Maharaj lodged below a tree.

The Nageshwar Jyotirlinga temple has some accommodation nearby, but those might not be available all the time. So, you might need to look for accommodation in nearby Ahmedabad. Near Nageshwar, the hotels have lesser prices, and some of them offer rooms at about 1000 rupees per day. The hotels in Ahmedabad offer more amenities and services, and the prices range from 1000 rupees to around 4000 rupees per day.

If you are booking the hotel room online, make sure to check the rules and regulations that they have. Some hotels might not allow a group of males, and some might not allow unmarried couples to share the room. Some of them might not have the cuisine that you wish. So, make sure that you check these aspects before you book a room.

Places To Visit Near Nageshwar Temple:

Nageshwar Jyotirlinga temple is in Dwarka, and you have several places to visit in this area, beginning with Bet Dwarka, the Gopi Talav, and several other locations that find references in the life and times of Lord Krishna. You also have the Dwarkadhish Temple and the Bet Dwarka Temple. If you are looking for something more comfortable, you can spend some time at the Dwarka Beach. Other places of religious and tourist interest at the Sudama Temple and the Sudama Setu, a bridge built in honor of Sudama, Lord Krishna’s childhood friend. 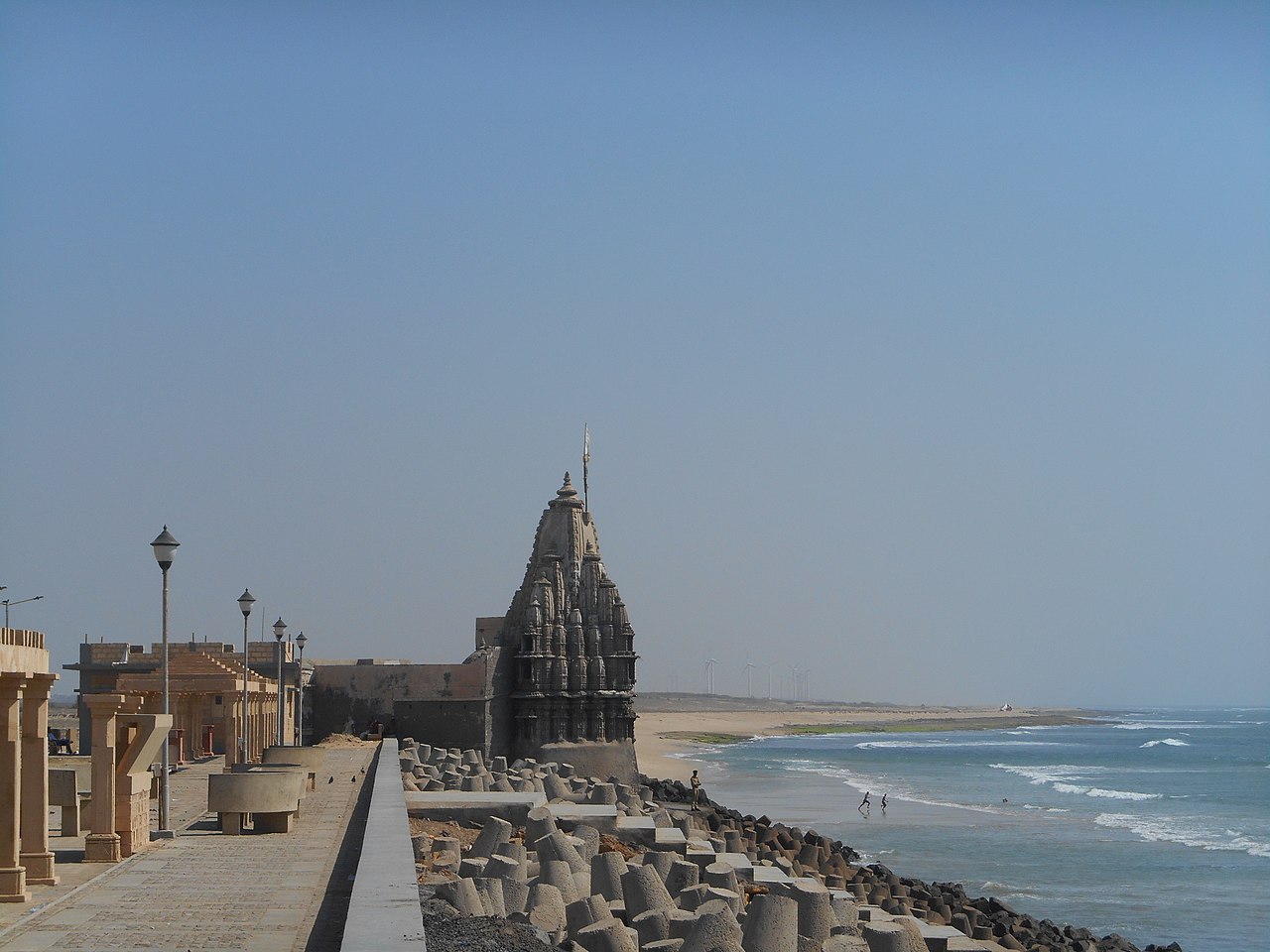 How To Reach Nageshwar Temple

To reach Nageshwar Temple, you first need to reach Dwarka. Dwarka connects well to other cities and states. Nageshwar Temple is about fifteen kilometers away from Dwarka, and you can hire local transport to reach Nageshwar from Dwarka. To travel by air, you first need to reach Jamnagar Airport, which is closest to the city of Dwarka and then travel from the airport Nageshwar by road. Dwarka is a five-hour drive from Gujarat. You can cover this distance by bus or by private car. You will also be able to hire a travels vehicle to ply you from Gujarat to Dwarka. 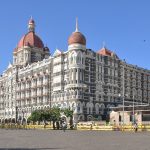 How Much Would It Cost For A Trip To India & When Is The Best Time To Get Great Deals in India? (2022) Previous 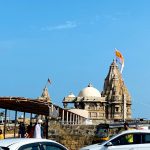 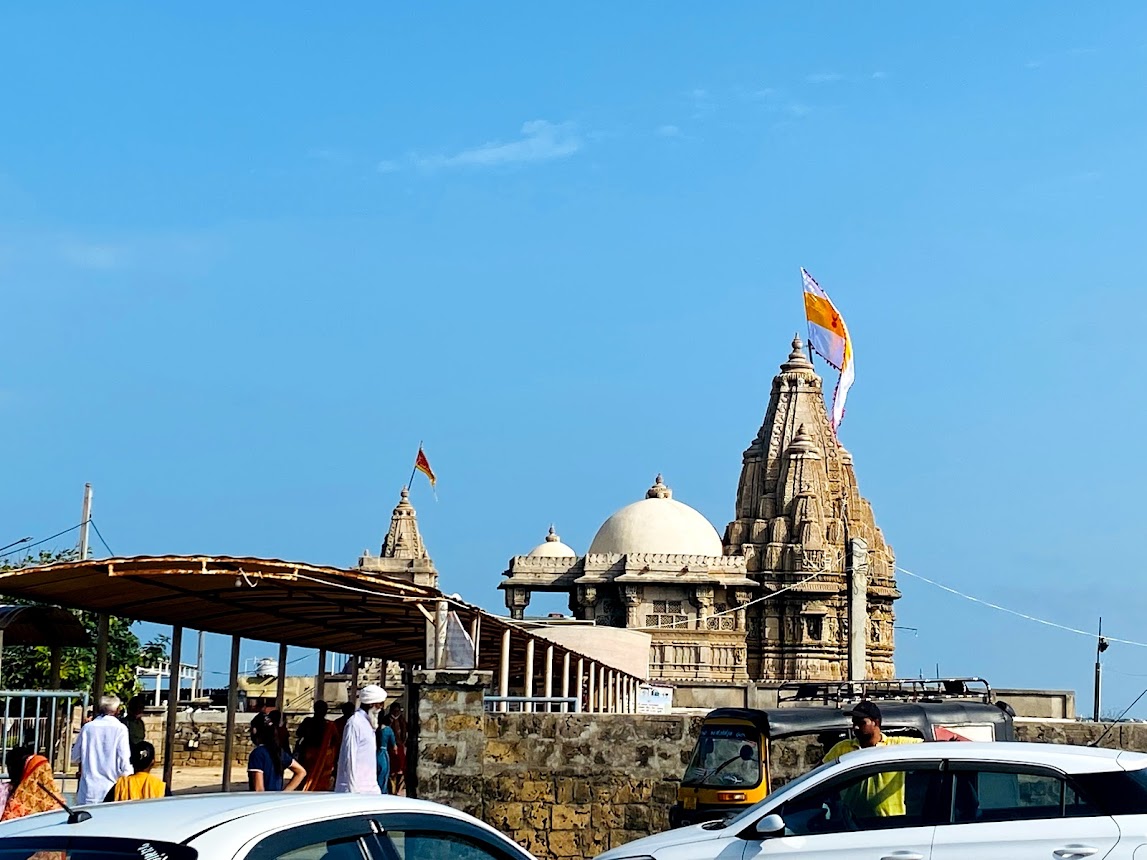 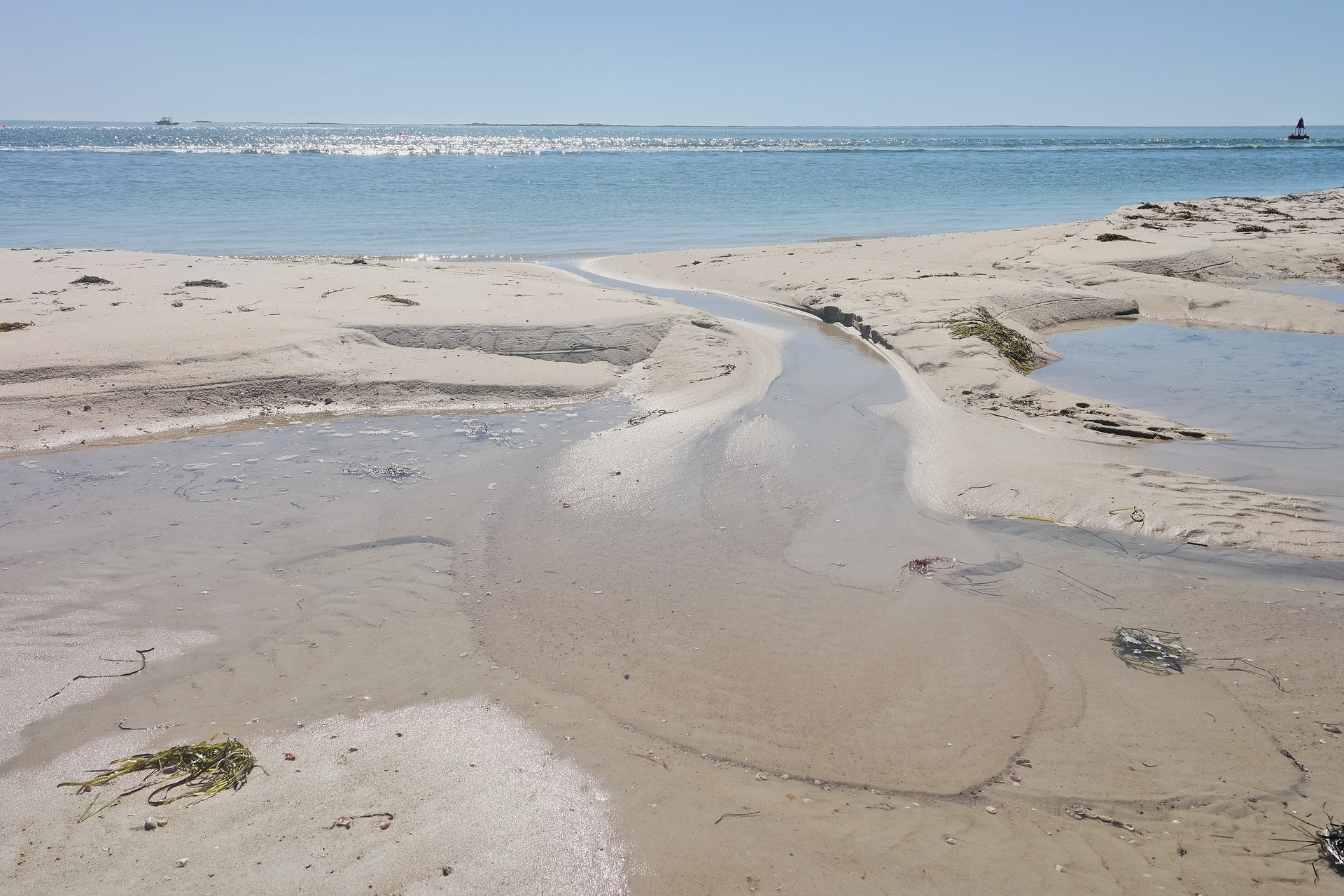 Visit Bet Dwarka Beach : One Of The Few Beaches That Give The Island Experience, Right Here In Gujarat (2022) 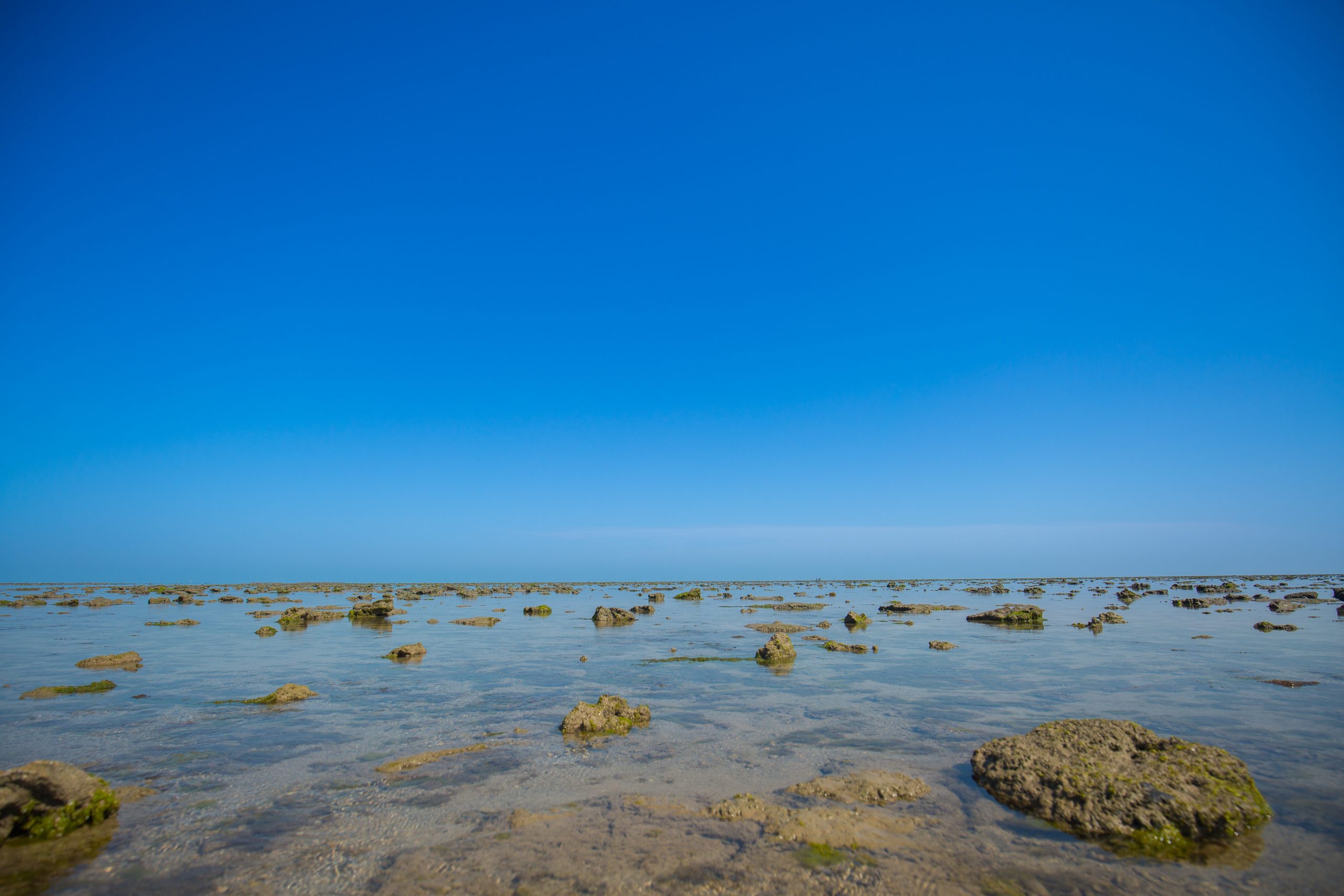 Visit Marine National Park: A Set Of Forty-One Islands That Is A Haven For Marine Life In Devbhumi Dwarka District In Gujarat (2022)