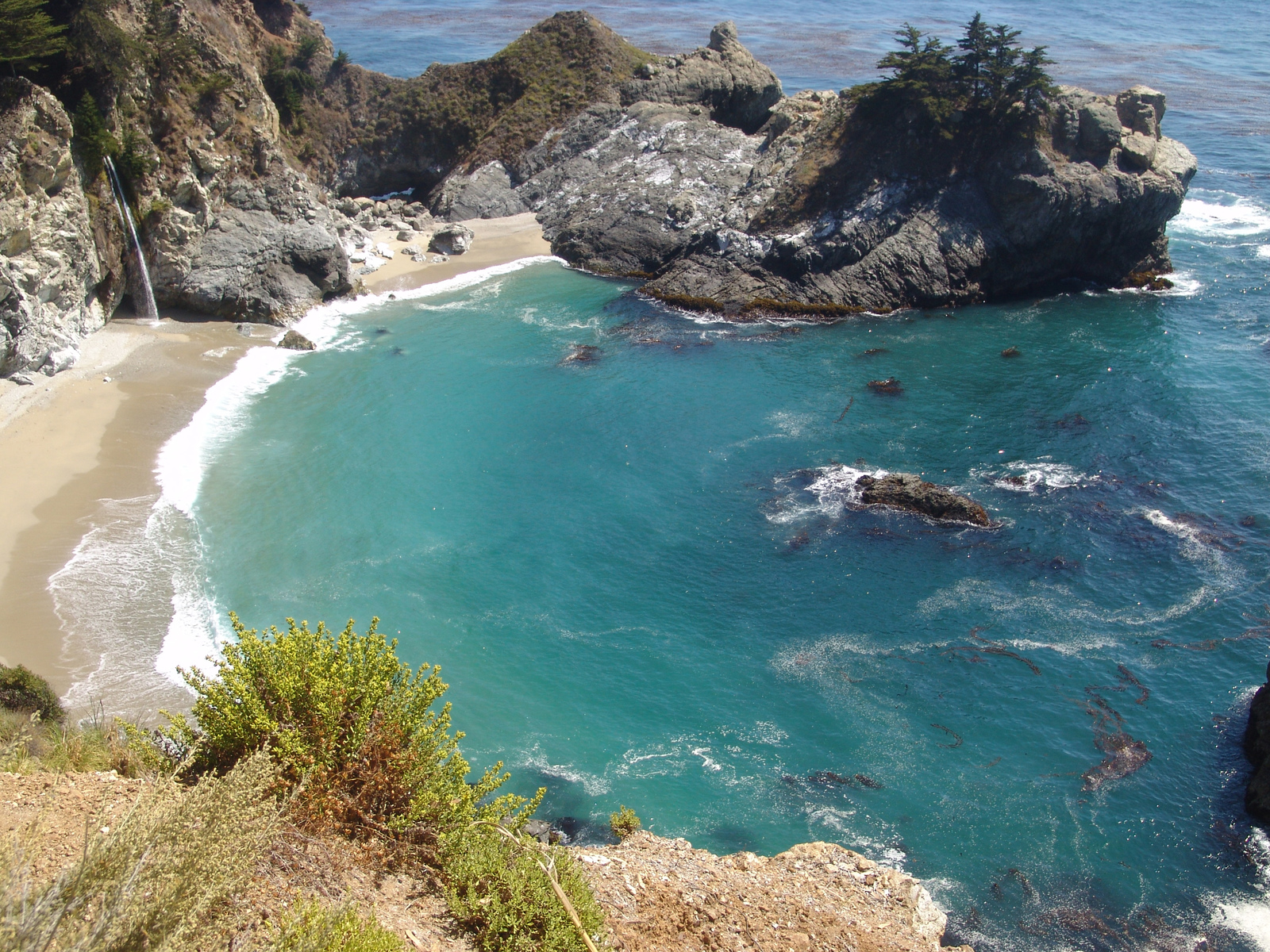 The diversity of nature and tourism in California is one huge fact, and there are never less of spots even if you categorize them. Being America’s third-largest State, nature has blessed California with abundance when it comes to beaches. Beaches are one of the most significant parts of the State’s appeal, and there are lesser states in the US that can compete with the essence of California Beaches. Its 800 miles long coastline says enough about how many options and variety of beaches one can find when exploring California.

Check out the list below and have a look at the “10 Prettiest Beaches in California”.

Situated on the north end of Monterey Bay, Capitola Beach is noted as one of the most beautiful beaches in California. It is known for the lovely and colorful seaside vibe that increases its charm, especially during the sunrise and sunset. The small townhome style colorful building right beside the beach reflects all the bright shades right into the water, creating a picturesque view. It also has a large fishing pier near the west end and a popular surfing area near the east end of the beach. A naturally formed lagoon behind the Capitola beach often becomes home to several tiny birds, which draws the particular interest of tourists. Summers in Capitola beach host live music plays, twilight concerts, art shows, and movies. Behind the beach, some excellent fine dining options are worth a try. 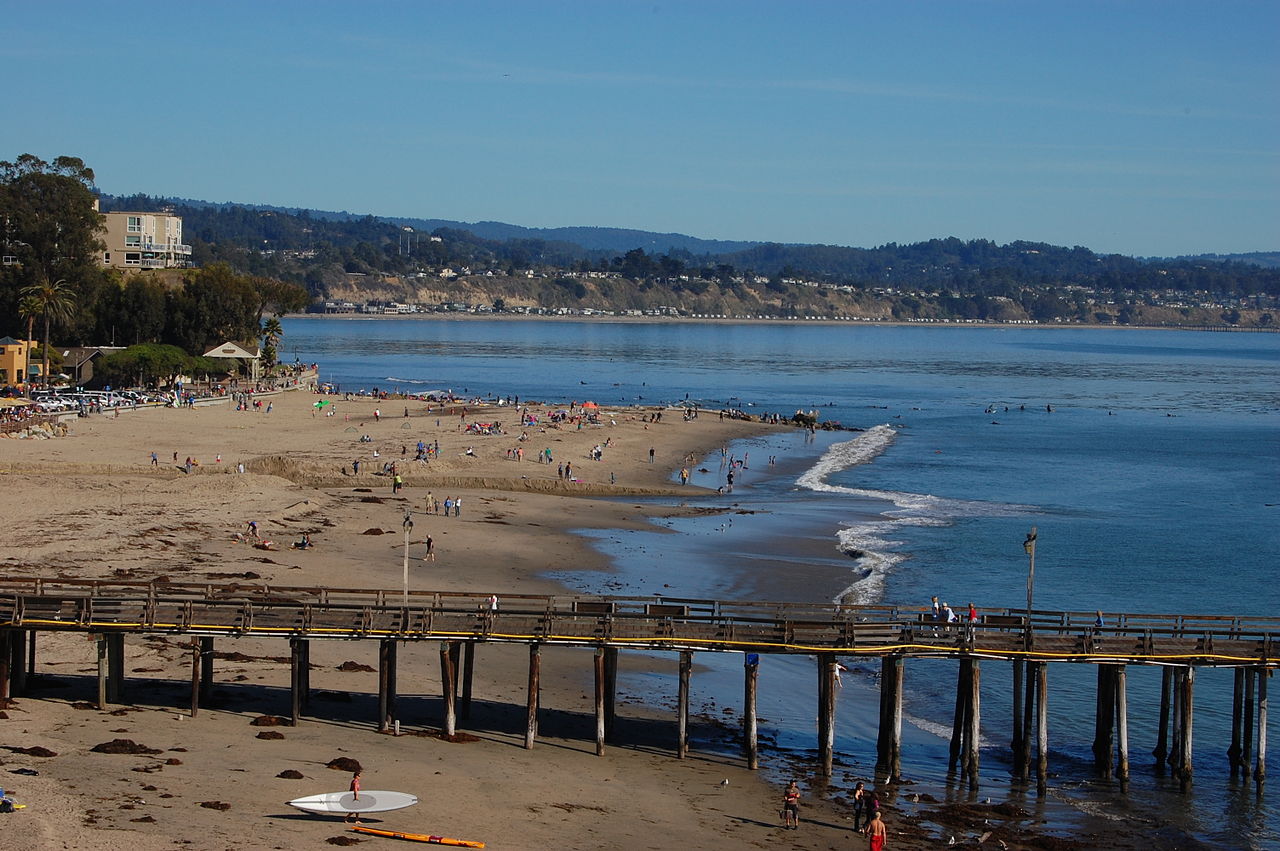 The magnificent crescent-shaped Pfeiffer Beach is no doubt one of the best beaches in California. Even the road towards the beach is even the most scenic driveway in California. It is best known for purple-hued sand and rocky outcroppings and a natural archway from where when the sun rays travel, it creates an alluring tunnel of light that is all worth traveling here. Whereas the purple-colored sand (under the regular earthy sand) is created when the rainwater run-off from the surrounding cliffs and the manganese garnet forms a unique coloration. The Pfeiffer Beach is often windy, making it dangerous for surfing here; however, walking along the beach area is soothing and relaxing. For visitors who want to explore an Instagram-worthy beach, Pfeiffer Beach is ideal for them 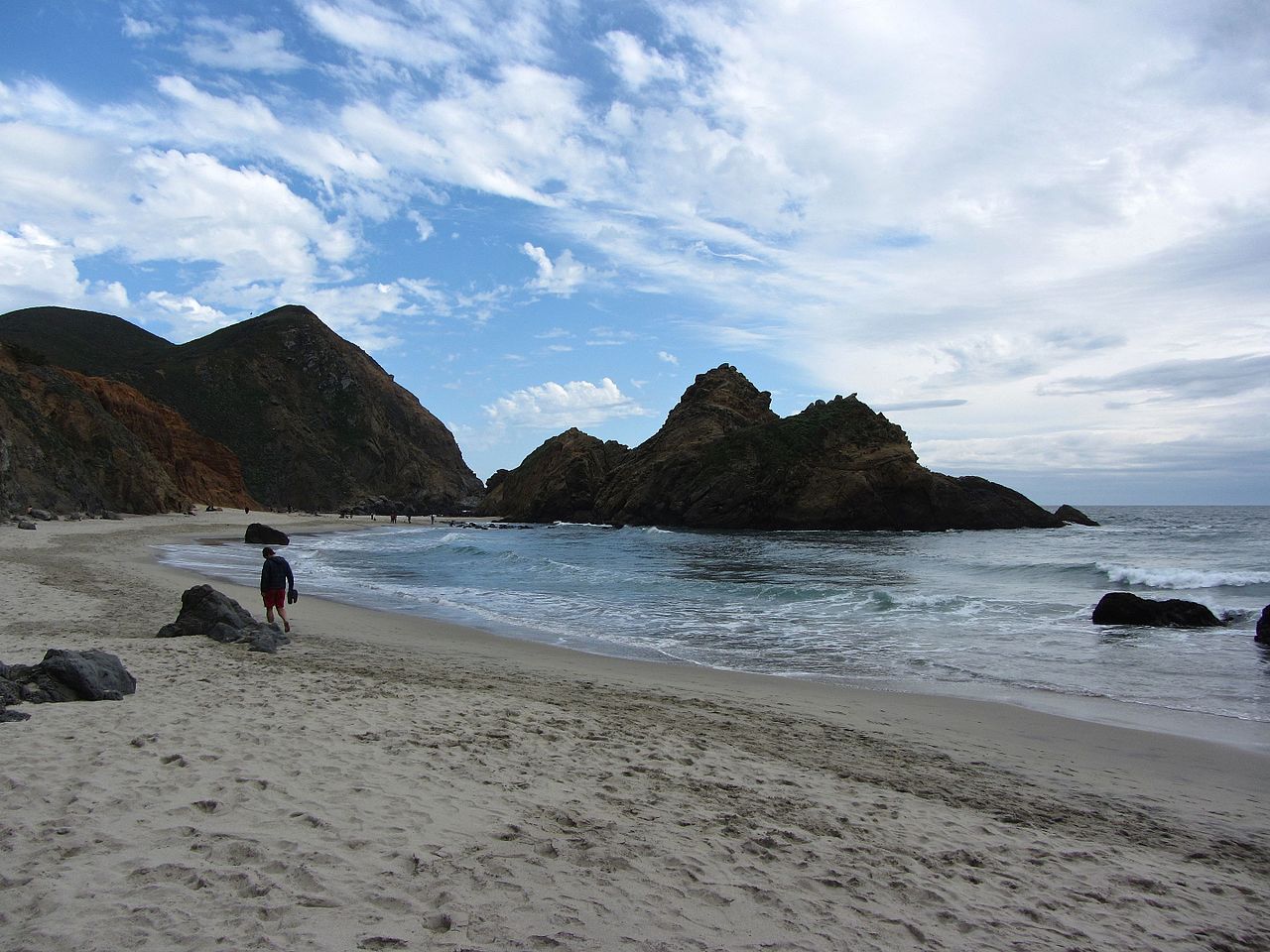 Coronado Beach is the most popular beach in San Diego. Best known for its wide stretched white & silvery sandy beaches, calm water, famous red-roofed buildings, and legendry sunsets, Coronado Beach is a family-friendly spot where you can either chill in the water or relax over the sand for an equally relaxing experience. It is a walkable beach and allows dogs as well. The beach lies just ten miles away from the north of the Mexican border. Thanks to the ideal water conditions, visitors here often learn surfing and brush their skills at the beaches’ Surfing Academy. Winters from December to February here bring the chance to watch whales from near as they can often get spotted closer to the beach. 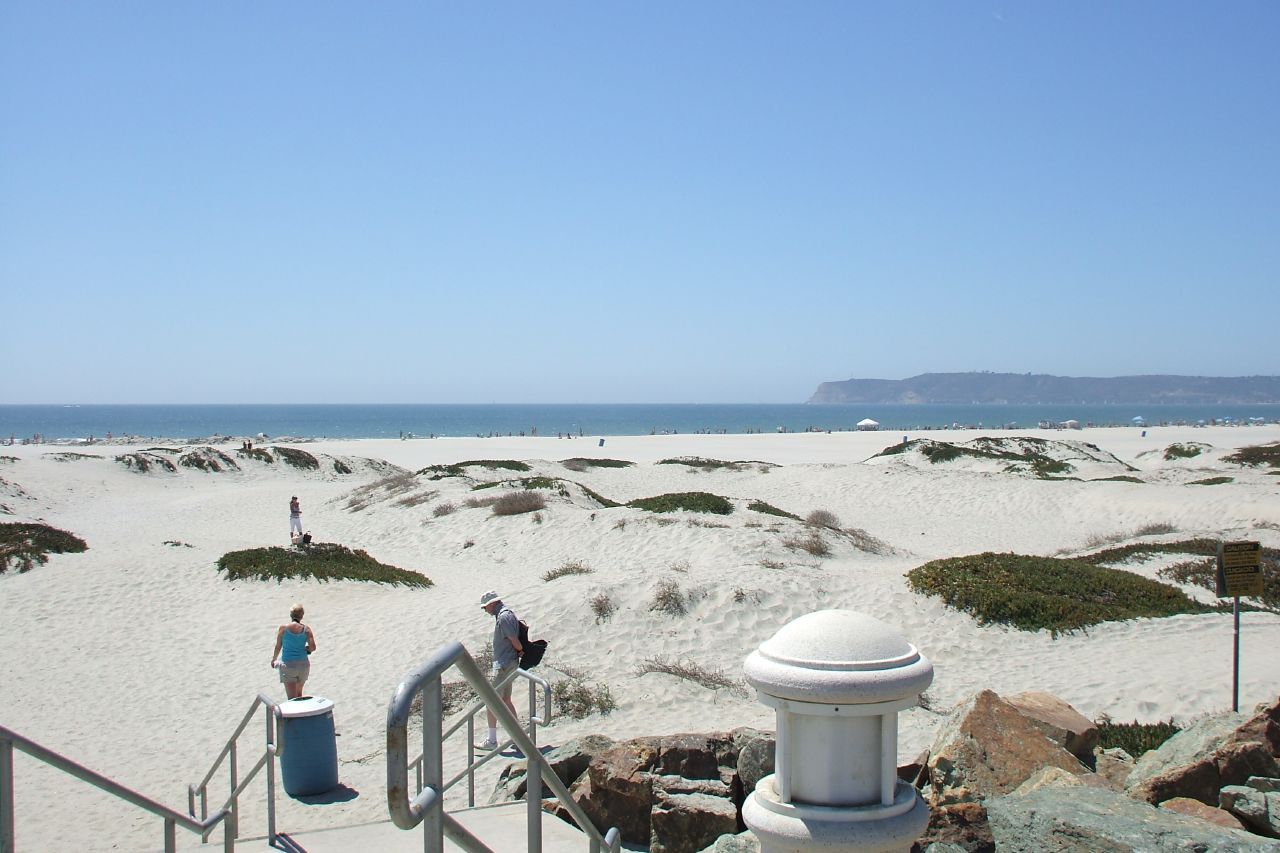 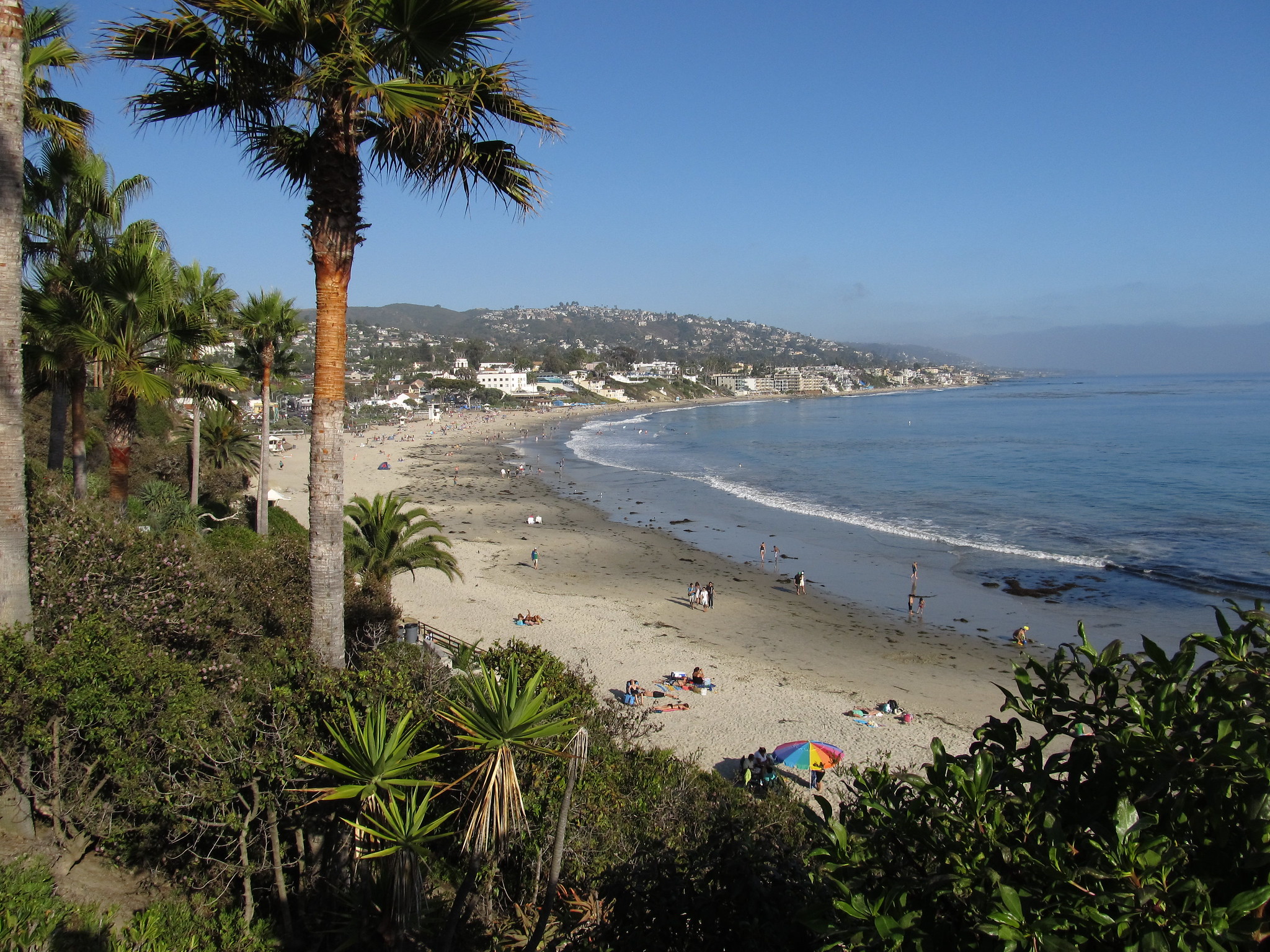 Not those regular California Beaches, Laguna Beach is a city with several beautiful beaches within the small coastal line in Orange County. Beaches at Laguna are naturally splashed with emerald green and blue tones, which during sunset dramatically turns into a fiery orange color creating a blissful sight. However, the beaches here are best known for are the tide pools and superb surfing conditions, which attract the most significant number of tourists every year. Being here, one can find over 30 coves, an ideal spot for luxurious coastal fun, and can indulge in various water activities, including surfing, paddle boarding, snorkeling, swimming, or beach sports like football, volleyball, and badminton. Even though the coastline of Laguna Beach is small, there’s something for visitors of all ages and interests.

Drive half an hour towards the South of San Francisco and reach the beautiful boardwalk of the Santa Cruz beach. It is a great sandy public beach with a vast, broad walk that offers a colorful oceanfront scene in the lap of a quieter atmosphere and a soothing environment all around. Besides the broad walk lies one of the popular seaside amusement parks in California that is defiantly worth a visit. Though the waves of the Pacific here are sometimes challenging, it is still one great spot for seasoned surfers who want to try their feet over the board here. When in Santa Cruz beach, do try the caramel apples sold by local vendors at the broad walk. 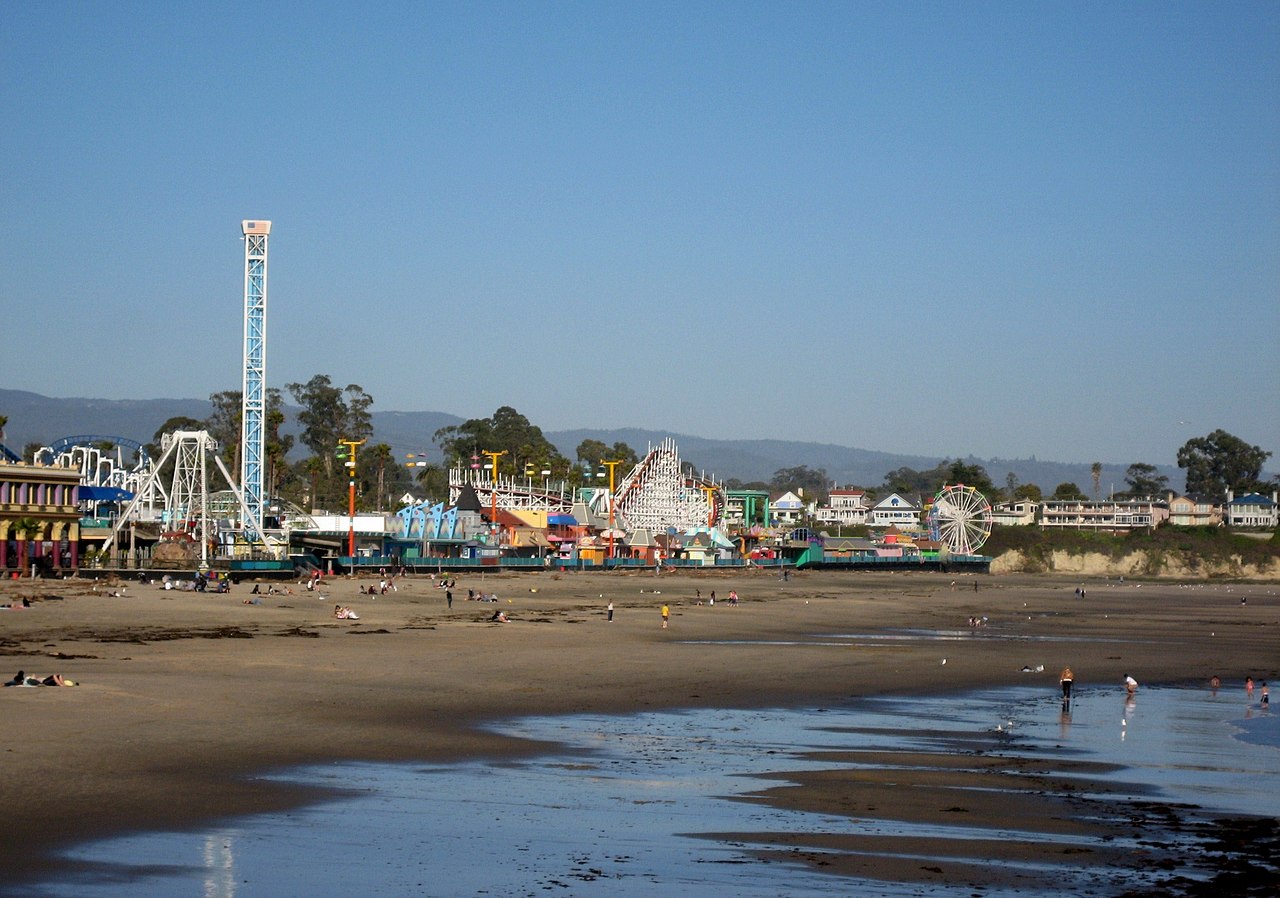 The Aspiring view of McWay waterfall and the McWay Cove Beach will leave your heart and mind spellbound with amazement. Though it is relatively smaller, the McWay Cove Beach is still one of the most amazing beaches in California. The beach is surrounded by small and medium heightened cliffs, and thus, reaching there is a slightly tricky task. For reaching there, from highway one, follow the trail towards the waterfall and then walk through the tunnel that emerges right before the ocean and then walk until you see the fall. McWay fall drops directly into the beach, which seems like a shower spray. The water here is extremely beautiful, with the maximum tone of emerald green and a layer of a thick feathery white sheet at the corners. McWay waterfall and beach is definitely one masterpiece of nature that cannot be missed when in California. 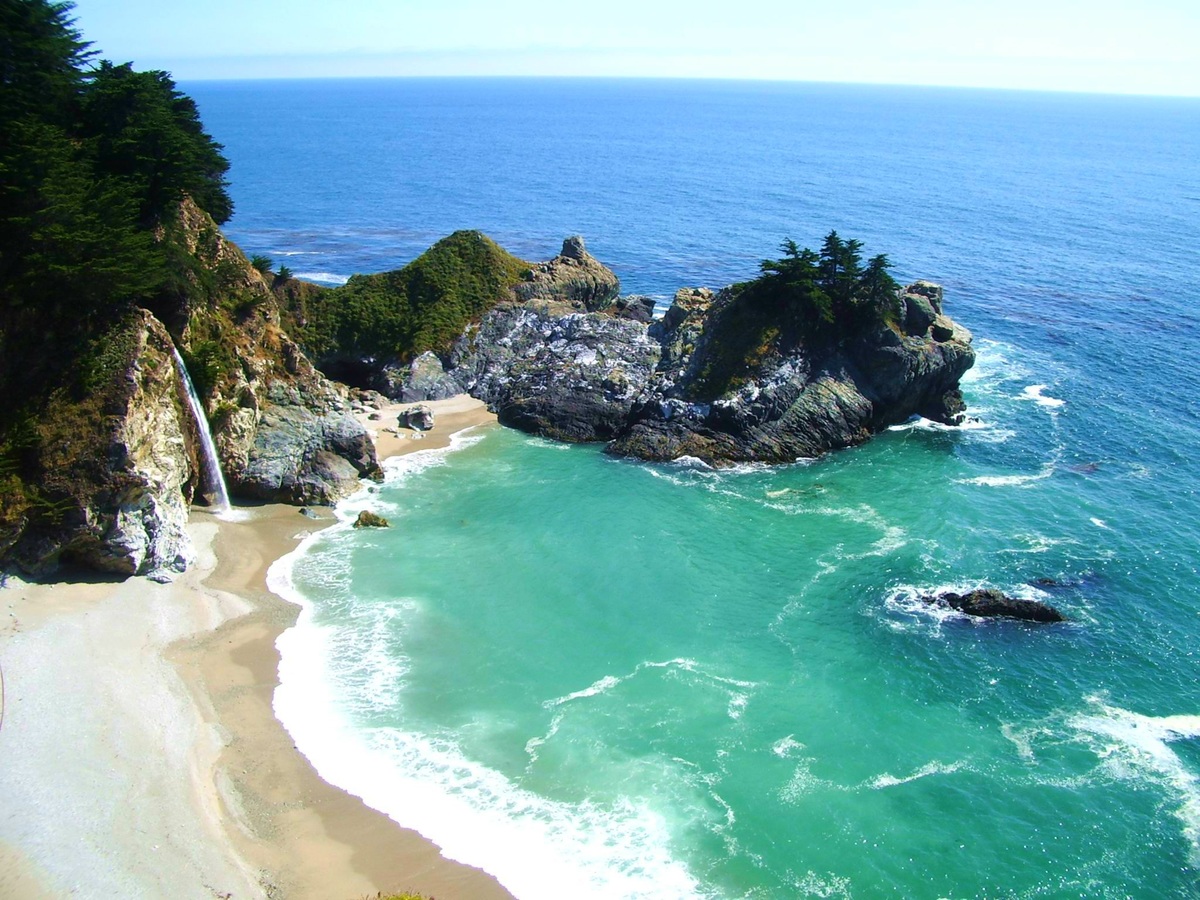 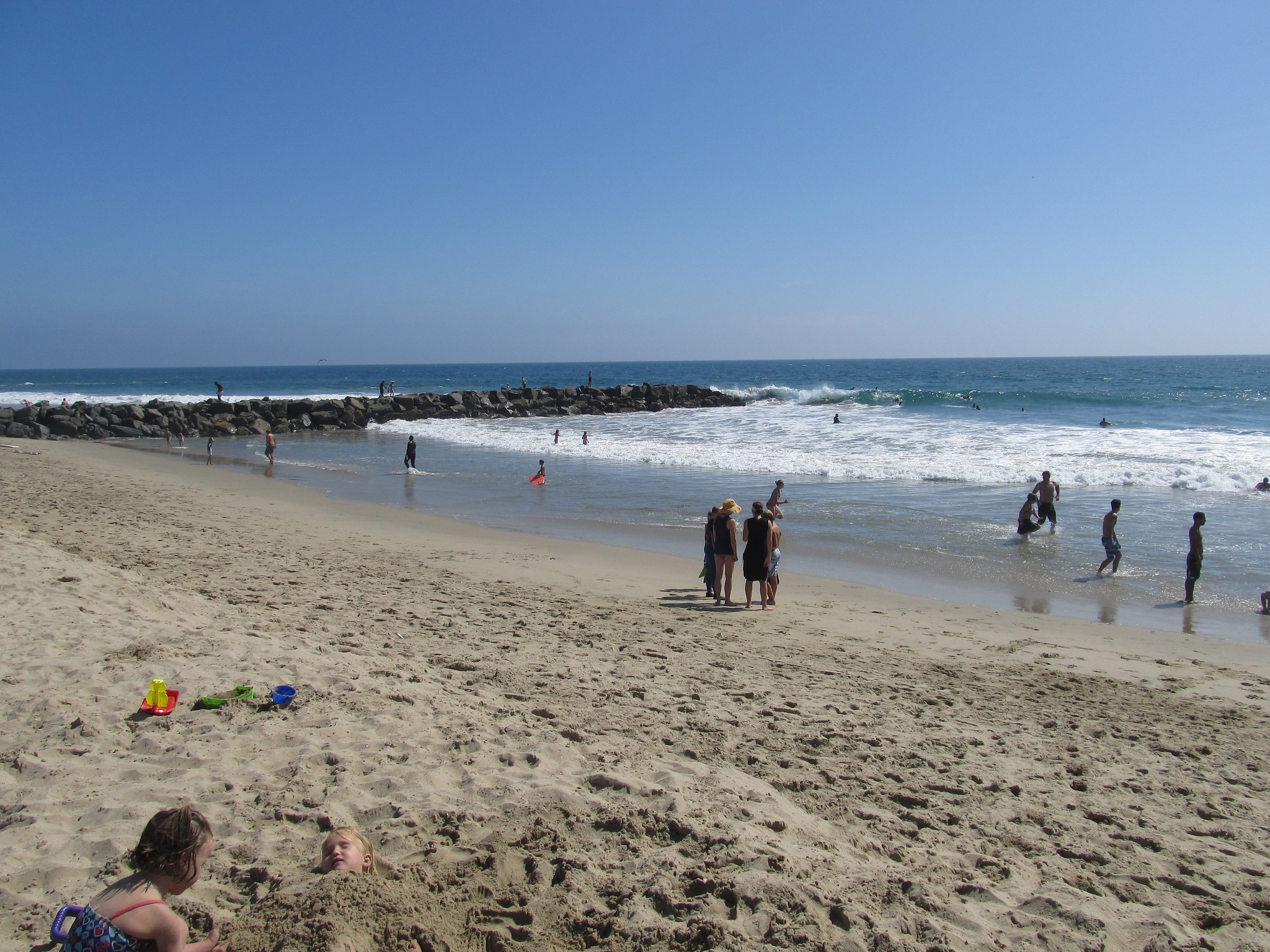 Newport Beach is highly famous amongst the visitors due to two specific reasons, great sunset views and one of the best surfing conditions. Here “The Wedge” is noted as one of the best-surfing sites in the world for both beginners and seasoned surfers. This westerly-facing beach in the State provides a clear and broad view of one of the best sunset experiences in California. The beach is a 5-mile long spread of silky sand that begins from Newport Pier and goes towards Balboa Pier. The historic pier and lifeguard stand here makes it look like a beach directly brought here from the past when the current demolished artwork used to be the beauty of this sight.

A unique picturesque beach with sand in various tones of black is the Black sands beach, shelter cove, California. It is similar to the one in Iceland and thus is known as one of the unique and memorable beaches in California. The coastline of Black Sands Beach stretches over 20 miles between shelter cove to the Mattole River Campground. It is an ideal spot of backpackers who often comes here to hike up the coast north to Lost Coast Trail or spend their nights and even weekend in the hike up the coast north to Lost Coast Trail. Being a west-facing beach, it provides a spectacular sunset view that looks more devine along with black sand, dark blue water, and dark orange sky. However, a part of the beach is restricted and blocked for human access due to the danger of high tide and the rip current. Swimming at the Black sands beach is also not a great idea as waves here come crashing at a very high-speed taking along anything that comes in contact. However, it is an ideal sight to adore the spectacular beach beauty of California from a safer distance and safer spots. 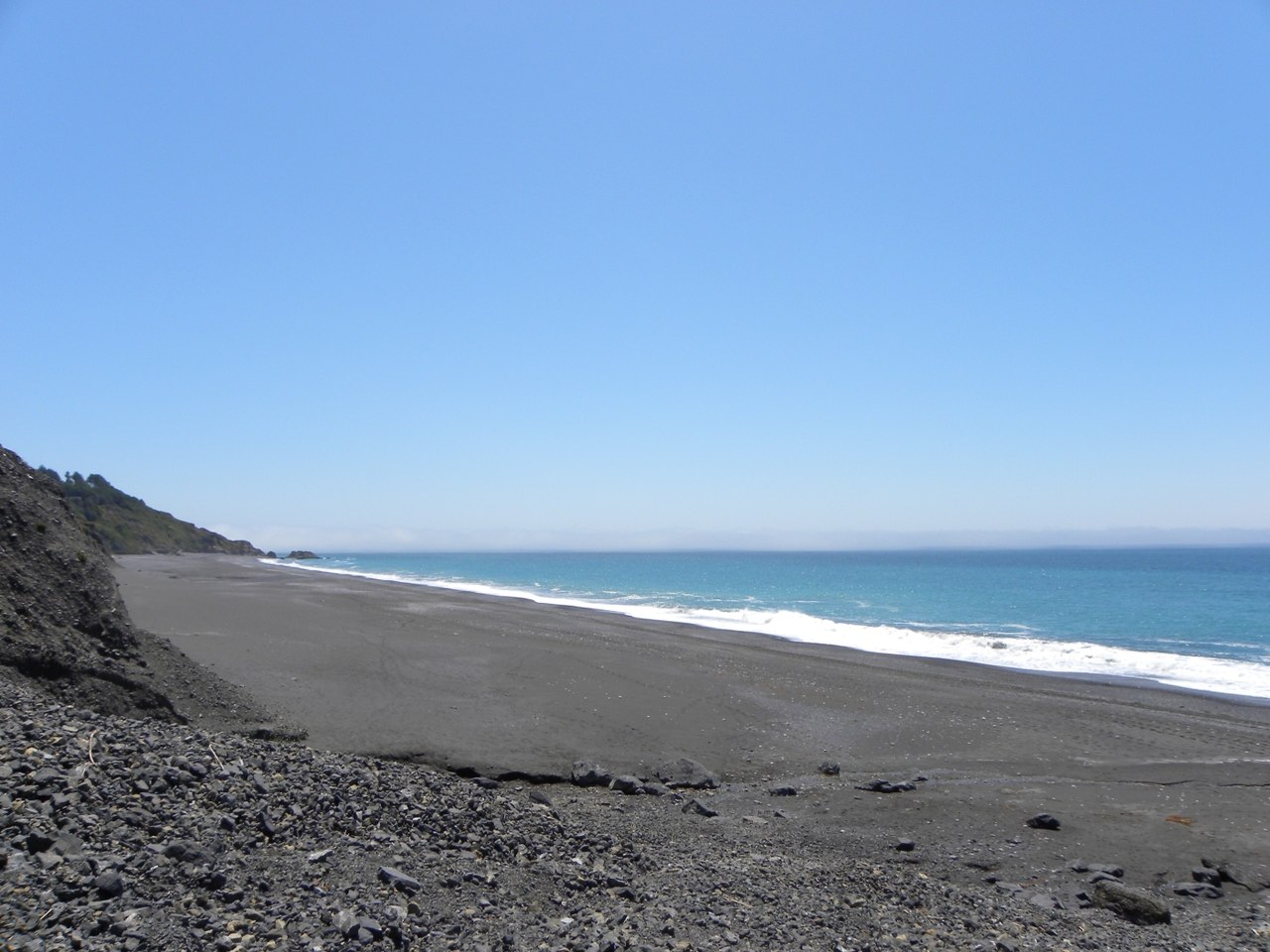 The Natural Bridges State Beach is one of the most popular beaches in California and an ideal location for spotting shorebirds, migrating whales, and seals and otters playing around. It is also known for the yearly migration of monarch butterflies from mid-October to late in January. During the butterfly season, the beach is full of visitors capturing views of almost a thousand butterflies spreading colors all around. However, what makes this beach famous all year round is the famous natural bridge from the beach towards the sea with naturally formed arches underneath. The arch creates a magnificent Instagram-worthy view and is defiantly a thousand dollars backdrop that one would crave for. Along the beachside, there are several tidepools that offer a variety of sea stars, crabs, sea anemones, and a glimpse of various other ocean life. Around the beach lies coastal scrub and grasslands where during springs with the bloom of wildflowers, colors spread beautifully over the surface. 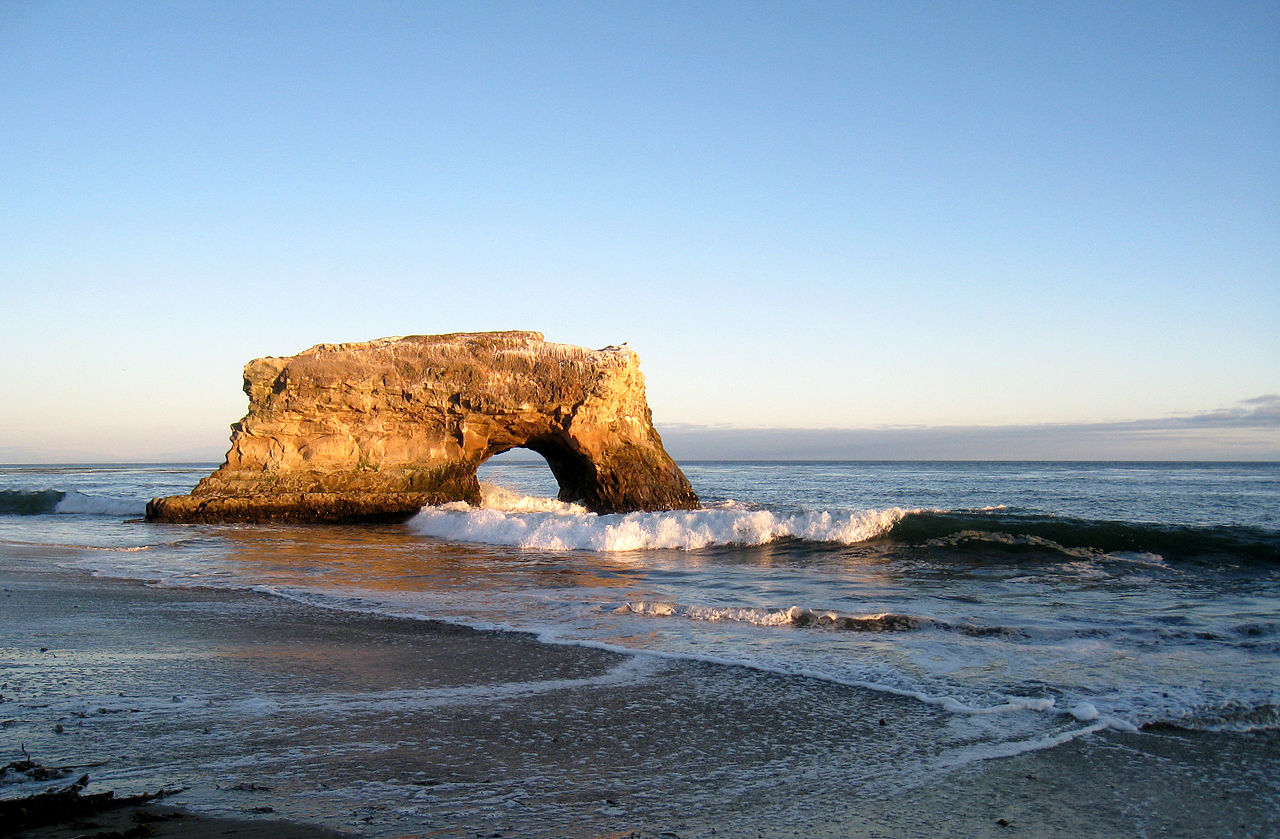 Sand Dollar Beach is a popular summer destination in California and is also well known for day picnics in the region. It is located near the southern Big Sur coast hallway between the Big Sur Station and Cambria. Unlike its name, the beach is not loaded with sand dollars; however, one can easily find jade stones, seashells, and other rounded sea rocks all across the coastline. The location is home to a dramatic rocky coastline that might be a challenge to access but looks alluring and one of a kind. The beach is just half-mile (or a little longer in the absence of tides), where one can dip in the blue water of the Pacific Ocean or hike around the orange rock of tall sea cliffs. Across the beach, there are several picnic tables, vault toilets, and trails where visitors can easily spend an entire day enjoying and playing around. The trails take one along the path and height from where one can overlook the refreshing and rejuvenating view of the Sand dollar beach. 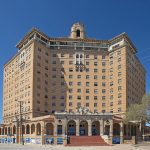 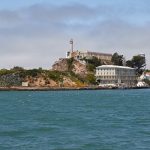