A land of grand forts and royal palaces, it’s a treat for anyone to explore the Indian state of Rajasthan. Home to a plethora of historically significant monuments which tell tales of the bravery, valour and the grandeur of the rich Indian heritage, the state is extraordinarily popular among locals as well as travellers. Located right at the edge of the great Thar Desert, Khimsar Fort is one of the top tourist places to visit in Rajasthan. Once serving as an independent kingdom ruled by the Thakurs of the region, today it is popular among travellers because of its wonderful sightseeing attractions. Situated near the Khimsar village which lies in the Nagaur district of Rajasthan, the exact location of the Khimsar fort can be traced as halfway between the city of Jodhpur and Nagaur, right on the eastern edge of the well–known Thar Desert.

Khimsar fort is one precious gem reflecting the architectural beauty and glorious past of the state. It is probably owing to its striking beauty and remarkable structure, that this grand fort has now been converted into a beautiful heritage hotel which is run by the royal family itself. Though a part of the Khimsar fort is still occupied by the descendants of the royal family but a visit to this fort will surely provide you an enthralling experience. You may be surprised to know that because of its architectural brilliance and extraordinary splendour, the Khimsar fort is considered to be one of the most spectacular tourist places to visit in Rajasthan. Boasting of a glorious historical past, the Khimsar fort houses many impressive structures inside its premises as well. Continue reading to know more about this magnificent fort!

History of the Khimsar Fort

Built approximately 500 years ago, somewhere in the 16th century by Rao Karamsiji, who was the eighth son of Rao Jodhaji, the founder of Jodhpur, this magnificent fort has been a witness to a series of historically relevant events. Estimated to have been built in 1523 AD, theKhimsar fort was owned by the great Karamsot dynasty. Rao Karamsiji established his kingdom in between Jodhpur and Bikaner. Moreover, it was due to this strategic allocation only that Khimsar fort caught the eye of many powerful dynasties and hence it is not much surprising to know that a series of wars were fought for gaining its possession. Till today, on a close look, one can see this striking fort wearing its battle scars on its walls proudly and high rising turrets, which significantly depict the great wars it has witnessed. 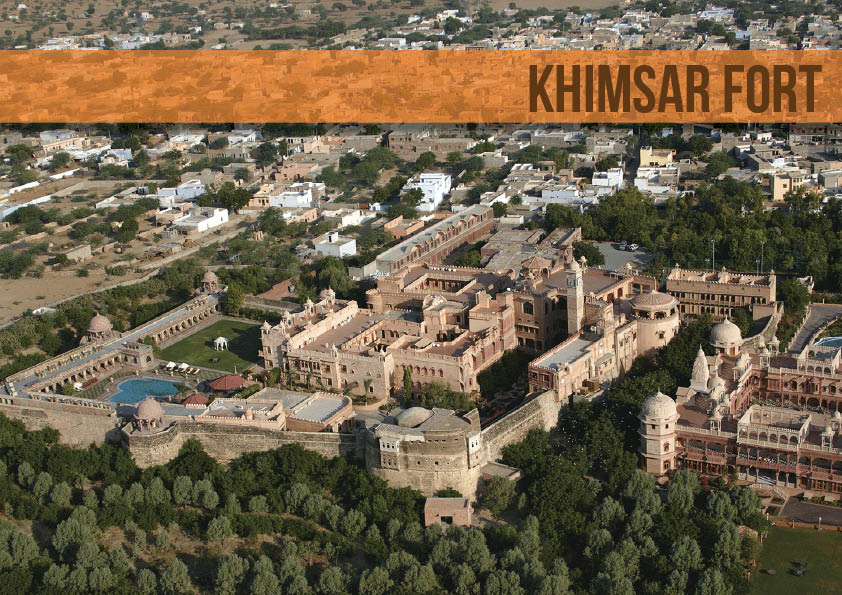 Image Source
It was somewhere in the 16th century that the Khimsar fort was further expanded in order to include the ladies wing which was followed by the royal family shifting in the premises of the fort. Other than that, many years later, in 1940, Thakur Onkar Singh even incorporated a regal and luxurious wing for himself in the fort premises. As you step inside the Khimsar fort today, you for yourself can witness the journey that this magnificent Khimsar fort has covered over the years unfold right before your eyes. A historical relic, theKhimsar fort which was once built to guard the Khimsar kingdom against the attack of enemies is now converted into one of the best heritage hotels of Rajasthan. The heritage hotel is run by the royal family themselves. Even the staff members that you see at the hotel are said to be the descendants of the royal courtiers who have been serving the royal family for generations with enthusiasm, passion and utmost loyalty.

Architecture of the Khimsar fort

Situated amidst the golden sand dunes, at the edge of the great Thar desert, Khimsar fort is one majestic fort with a remarkable structure of architectural brilliance.

Boasting of sprawling over a vast area of about 11 acres of land, the lush green gardens spreading over acres of land in the fort provide a striking contrast to the sandy desert, thereby adding a picturesque touch to the entire landscape. You will be surprised to know that the place boasts of greeting their visitors with a beautiful sight of more than 50 different varieties of bird species. This exceptional and extraordinary welcome not only warms the hearts of the visitors but also add to the grandeur and charm of the fort in whole. 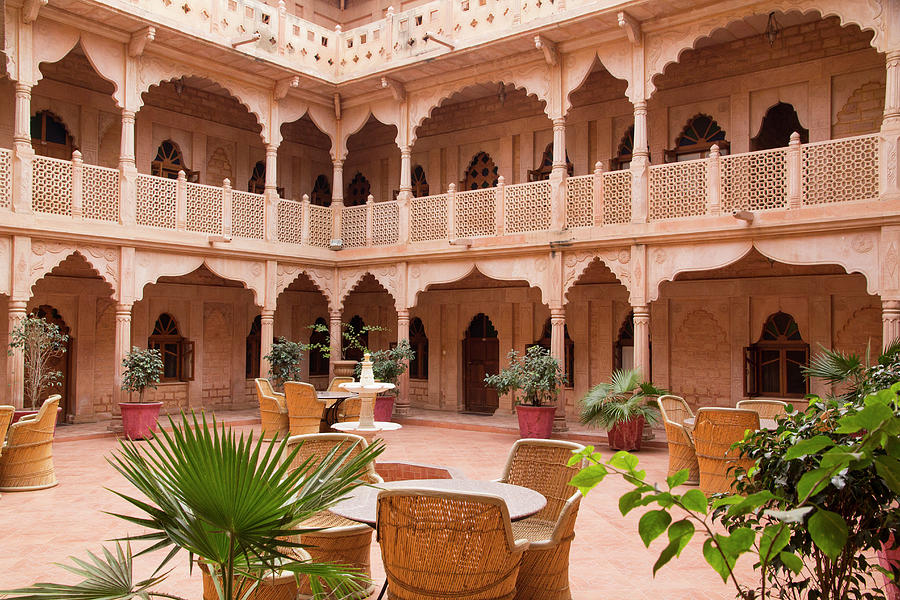 The long pathways as well as the corridors of the Khimsar fort comprise of turrets, stables, historic ruins, majestic towers, mighty pillars erected in the honor of the brave warriors and satis. Some of the historic guns and cannons are also preserved well inside the fort. Other than that, the highlight of the place are the beautiful sandstone carved statues of the 9th century Jain Gods and Goddesses. Owing to its marvellous visual appeal, great hospitality, rich historical significance and stunning architectural brilliance, it is not hard to guess why the Khimsar fort is regarded as one of the top forts to visit in Rajasthan.

If you have always wondered about the royal lives and have dreamt of living in one of those fantasy castled amidst the esteemed royal presence, then the Khimsar Fort Heritage Hotel is the ideal tourist place to visit in Rajasthan for you. Nestled in the picturesque sprawling Thar desert, this heritage hotel offers its visitors the perfect amalgamation of history, beauty and luxury combined. With an extensively spread property, stunning architecture, spellbinding natural beauty, modern amenities, beautiful interiors and a rich glorious past, Khimsar fort has remained a top choice among many travellers since a long time. 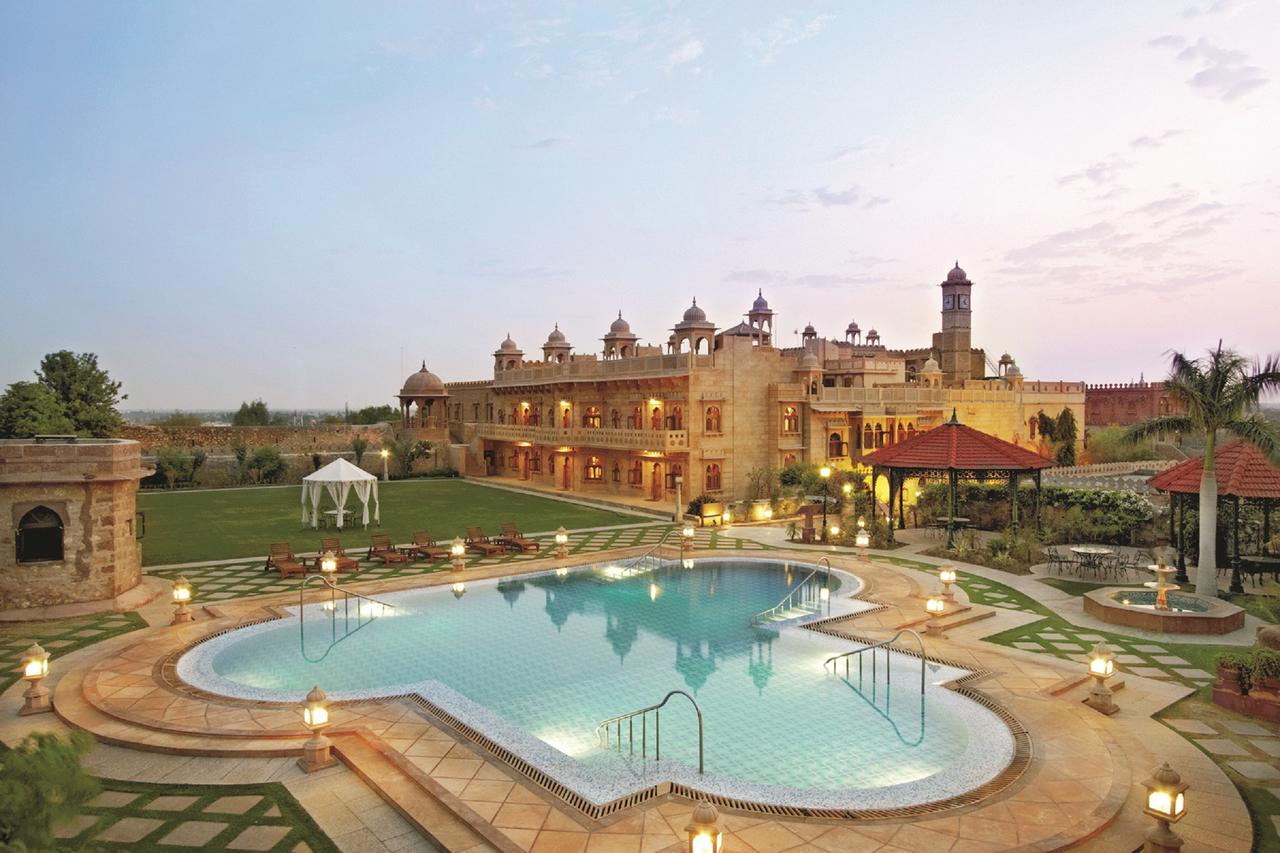 Image Source
It is the perfect accommodation for all those people who wish to have a true taste of the traditions, history and hospitality of the Rajasthani culture. Some of the attractive features of the heritage hotel which usually appeal to people are its ample spread orchards, vast courtyards and lush greenery, which is definitely a rare thing you get to see amidst sand dunes of the Thar desert. This exciting natural setting has caught the eyes of many people all over the globe. Owing to its comfortable stay, luxurious interiors, modern facilities, unparalleled beauty and courteous staff, it is not surprising to know that the Khimsar Fort Heritage Hotel has been honoured with a plethora of awards and recognition from renowned people.

Timings and Entry Fee of the Khimsar Fort

Once built for guarding the city against the enemies, this mighty fortress now boasts of being one of the best heritage hotels of Rajasthan. Since it is a hotel, it is natural that there are no specific timings. The visitors are open to make a reservation at hotel anytime throughout the day and night. Hence, anyone whois interested in exploring this historical masterpiece and experiencing the Rajasthani culture at its finest, can easily book the rooms of their choice and stay at this remarkable fort. As far as the entry fees are concerned, there is as such no entry charges to simply look at the exterior appearance of the fort from outside. However, the people who wish to explore the interiors and want to stay at this esteemed heritage hotel, have to pay. The charges for staying at the hotel can vary depending upon the kind of room you opt for and the other facilities that you use during your stay.

Like the rest of the state of Rajasthan. Khimsar also experiences a hot and dry climate. Owing to the somewhat extreme climate that the place experiences, while the winters can get chilly with temperatures reaching 7 degrees Celsius, the scorching heat of the summers can get really unbearable sometimes with temperatures soaring as high as 44 degrees Celsius. Though the place receives visitors from far and away throughout the course of the year but if you are looking for the best time to visit the Khimsar fort, then it will be during the winter months which usually begins from the month of October and last till February. The weather is actually pleasant during the day to allow you to go for outdoor adventures. However, those of you who are planning to stay indoors within the hotel premises, no matter whenever you visit, you will have a great experience.

How to reach the Khimsar Fort?

While vacations are always fun but the planning, understanding the travelling issues and figuring out the best way to reach the destination are a few things which can actually stress you out, all the more when you are a first – time traveller. However, if the destination you are going for the vacation is Khimsar Fort Heritage Hotel, then you have absolutely nothing to worry about. It is one of the most popular tourist places to visit in Rajasthan and attracts visitors from all over the world. It is well – connected with many major cities and states of the country through multiple means of transports. Some of the best ways to reach the Khimsar Fort are as follows:

By Air: The nearest airport to reach the Khimsar Fort is located in Jodhpur. The Jodhpur Airport is situated at a distance of about 92 km from Khimsar Fort. However, this airport boasts of providing direct connectivity from most of the metropolitan cities of the country such as Delhi, Mumbai and Kolkata. Once you reach the airport, you can easily take a cab or hire a taxi which will take you directly to your destination. It will not be a very long ride.

By Rail: The nearest railway stations to reach the Khimsar fort are located in Jodhpur and Nagaur. Both of these stations are well – connected with many major parts of the country and provide a plenty of trains. Once you reach the station, you will have to take a cab or hire a taxi to reach the fort. Other than that, some buses also run on the route on a daily bus frequently.

By Road: If you are planning to travel to Khimsar fort via road, then you will be pleased to know that the place is well – connected via roadways as well. There are plenty of buses which connect Khimsar many other major cities and towns located nearby in Rajasthan such as Jaipur, Bikaner, Jodhpur. Most of these buses take you till Nagaur. Once you reach there, you can hire a car or take a jeep to reach the fort. Khimsar is located at a distance of about 90 km from the Jodhpur – Nagaur – Bikaner Highway. You can even travel by personal vehicle.

Bestowed with the award ‘Grand Heritage Award for Excellence’ by the Department of Tourism, Government of India, which is considered as a laurel of the highest order, this award makes Khimsar fort one of the top places in the bucket list of many travellers across the globe. 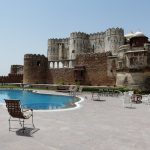 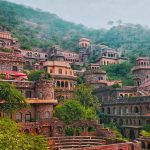 Visit Neemrana Fort: Undoubtedly One Of The Most Popular Forts To Visit In Rajasthan (2022) Next

Visit Neemrana Fort: Undoubtedly One Of The Most Popular Forts To Visit In Rajasthan (2022)

Visit Kankwari Fort: The Fort Where Dara Shikoh Was Captivated Till His Very Last Breath (2022)